It's taken me two days to recover from Sunday's run. Two! Whole! Days! Never underestimate the effect of heat and humidity on how much and how hard you can exercise. In hind sight, it would have been far more sensible to finish at 15k, or even 12. But I am obviously not sensible. My brain said - "Okay, you've got a half marathon in 7 days and you haven't done a long run in a couple of weeks so maybe you should cram one in." All I can say is that Sunday's half WILL be much easier than Sunday's run - or today's, for that matter.

Coach Chris's mean streak is continuing and he had us doing Kenyans again - but not just ordinary, nasty Kenyans ... we had to do 2k Kenyans!! I knew I was going to be in a world of pain. And I was right. The only redeeming feature of this session was that it finished! And my knee didn't hurt, not one little bit. And I probably was 2 kilos lighter when I finished (but not now).

After the session I had breakfast with Jenny. We have it at a lovely outdoor eating area which we have to share with the local wildlife. Today we had to share our table with a butcher bird. 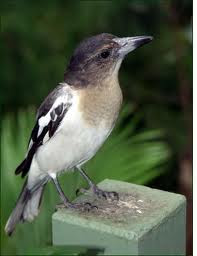 He sat on the back of a seat and watched us eating. Of course I couldn't resist feeding him a small bit of my toast, which he took right from my fingers. He spent some time swallowing it (it was a bit dry and he didn't have any coffee to wash it down with) and then, to thank me he burst into this beautiful song. It was like a birdy flash mob! All the other diners stopped eating to listen and once he'd finished they refrained from applause so he wouldn't be scared away. And I rewarded his efforts with another piece of toast. What a smart bird!