That's the only word that could describe Bubble's face today when I left on my walk/run without her. She saw me dress in my running gear and her little tail began to wag. Then she saw me pull out my running shoes and the tail wag became a mad flutter. There was some hysterical whining. She followed my every step - even into the toilet where the whining and tail-wagging continued. There was some confusion when I went to the front door without going to collect her lead. But she was still hopeful. And then she was devastated when I firmly said no and shut the door on her sad little face. I'm so mean.

That's how I felt last night when I found my eldest son in the bathroom shaving his legs. No, he's not a cyclist, triathlete or swimmer. And yes, I know that you don't have to be a girl to shave your legs. But there's something a little feminine about doing so. He had good reason, though. Today they're going to be practising strapping techniques for his course and he was quite prepared to appear a little feminine at home as long as he didn't squeal like a girl in front of his other macho uni friends.

When I walk/run I like to enjoy the scenery. And if that scenery just happens to be a young man on his bike with spray-on lycra which shows off every muscle contraction, well so be it. Today's scenery was not quite that pretty. Heavily overweight, with his stomach resting on the crossbar of his bike. Puffing and wheezing as he struggled to pass me (I was only walking). And then he passed and I was dazzled by the spectacle. Two  milky white moons divided by a deep crevice and decorated with the ghost of recent pimples past. As much as I admired that he was getting out to exercise, I was horrified by his wardrobe malfunction. There are just some secrets that should forever remain hidden. And there are some moments when you wish that you had a camera because words truly can't give justice to what you've had to behold. 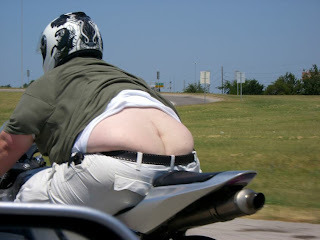