Crap!!! That's what it's all been about today. I started the day to find a pile of it in the hallway. Honestly, it looked as though the house had been broken into by a pack of horses. Nelson did his usual I'm-too-ashamed-to-look-at-you sneak out of the house. Four fifty am is too early to be cleaning up poo of any sort.

Then I came home from training to find that my toilet had blocked up. Woohoo!! If there's something I like even more than cleaning up dog poo at four fifty am, it's unblocking a toilet of all the morning waste products of a family of four males. Plunging the toilet brush as far down the s-bend as it will go and releasing what ever's causing the blockage could possibly be the highlight of my week. Thank goodness I have a strong stomach.

I was watching a comedy festival on TV last night and one of the comedians suggested that it was hard to convey intent with electronic media. He suggested that there should be a few more fonts developed with precisely this problem in mind. I totally agree. But I'd probably be using Sarcastica all the time.

On the training front I'd like to announce that I did a whopping 27k last week. With maybe 10 of those k being slightly more than a walk (calling it running is like saying that Paris Hilton is a talented celebrity). I'm having to be so careful with how much I push it. Saturday's run was a bit too much. When I looked at the info from my watch I saw that I'd let my heart rate get way too high on occasions. Unfortunately I can't judge by feel that it's as high as it is so I have to keep my eye on my watch. But I know I've pushed it too much if I feel nauseated a few hours after or the next day and my legs ache after each session, like I'm coming down with a fever. I felt pretty ordinary on Sunday so I took today's session really carefully and managed to keep my heart rate at a much lower level. It's all such a different mindset to what I'm used to - take it easy and don't push!! I'm learning very slowly.


March has finally arrived and with it is the start of a long month of birthdays. (Mine's next Tuesday, thanks for asking). I made my first birthday cake of the month yesterday and, being that it was for Coach Chris, it warranted an extra amount of thought and effort. 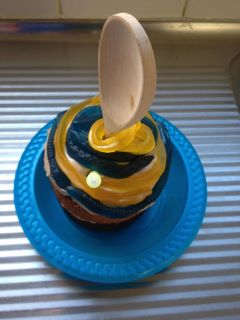 It's possibly the ugliest cake I've ever decorated. But there's a special meaning behind everything on it. Coach Chris is an avid fan of his chosen team in the NRL comp - the Parramatta Eels. He deludes himself into believing that THIS year is going to be THEIR year. In fact I think the last time that they won the Grand Final was in the '80s. He also likes to rev up the squad's Bronco's (the local team) supporters when the Broncos play the Eels - as they did last Friday. Broncos won. Eels lost. Coach Chris got lots of 'suck it' texts and now has this lovely cake to commemorate the occasion with. I hope he enjoys eating all those Eels with his wooden spoon. Happy Birthday Chris!!