When Nelson was a young dog I did what every good owner should do. I took him out on walks and tried to socialise him around other dogs. Unfortunately all dog-owners aren't diligent about doing the same and on two occasions we were attacked while Nelson was on the lead by less-than-friendly dogs (ie vicious mongrels) . This made Nelson very wary of other dogs while he was being walked and as a consequence we would generally avoid any canine contact.

I don't want this to happen to Toby. I want him to be one of those lovely, friendly dogs who you can trust while you're out on a meet and greet. And so I've been taking him for little walks and whenever we meet other dogs I ask their owners if they're friendly and can Toby say hello. Nine times out of ten it's been good so far.

But on Monday our luck ran out. We were walking in our usual area and came across two dogs who were off-leash and their owner who was on a motorised wheelchair. I asked her if they would be okay to say hello to and she said yes. And that's when her dog attacked Toby. He rushed at Toby, teeth bared, hackles up and barking viciously. Toby's reaction was almost one of amusement. He's totally convinced that all the world loves him and if they don't yet, they will soon. Plus he's used to vicious teeth-bared, hackles-up play fights with Bubbles. And finally, being attacked by a 19 year old chihuahua is almost like being attacked by a pool-noodle-wielding centenarian with arthritis - where the attacker is more likely to be hurt than the attackee. Toby just wagged his tail and we walked off totally unfazed. 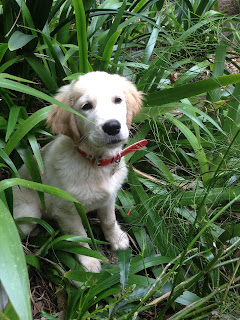 I had another successful run yesterday. There's nothing like a good run to give you a little boost of confidence leading into a race. It was speed session Tuesday. I'm still not doing the whole session and I'm certainly not doing what the rest of the squad is doing. I do a 3.7k loop around the uni and catch up with the squad about 20 mins into the session and then I do about 3 X 1k repeats with a standing recovery. It's a half-length speed session but I'm managing it most of the time without repercussions.

What I'm finding is that my heart rate is staying nice and low for the first section where I run by myself - so much better than where it was even six weeks ago. And now the 1k reps are slowly getting quicker. They were quick enough yesterday that I had time to throw in a 600m rep at the end. And it's not just the reps that are improving - the standing recoveries are getting shorter. Woohoo!

And with the improvement in fitness has come an improvement in my mood. I read an article in the latest Runner's World about mood and exercise and what it told me is that I'm a junkie. I need my fix of endorphins on a regular basis. And I generally only get those endorphins when I'm running a bit harder. A lady I know swears she gets them from walking but I would go so far as to say that she's never actually had that endorphin rush if she thinks walking can give it to her. Sure, walking can lift your spirits but I've never finished a walk feeling euphoric.

I don't know if it's good or bad to have to admit to being an addict. But I do know that if I'm going to be addicted to anything, at least this addiction is a pretty healthy one. I don't know of many others that make you age better, improve your cardio-respiratory system, keep your weight in a healthy range and ward off the myriad of weight-related chronic conditions, help with mental disorders, keep your brain firing strong as you age and slow down age-related muscle wasting. Yep, I'm almost proud to be a running addict.