I'm such a mean puppy mother.

I took my baby to the vet yesterday and left him there. He needed a little cosmetic work - to tidy up the two tumours between his legs. It meant starving him, letting the vet stick him with a needle, and then locking him in a cage. But worst of all it meant leaving him with strangers for hours!

The receptionist had said to come pick him up any time between two and four in the afternoon. So I was a little surprised when I got a phone call at 1:15. It was hard to hear the receptionist over the howling in the background but the gist of the conversation was could I pick him up sooner because the howling was getting on their nerves.

But the most truly awful part of the whole business was the special accessory they made him wear - the Elizabethan collar or, in layman's terms, the bucket. When you've just had a sedative and a general anaesthetic, the bucket makes it really hard to get around. 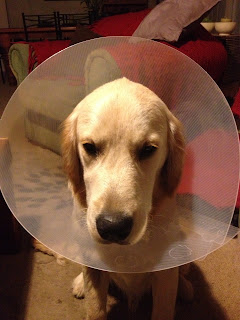 Poor Toby kept walking into door frames, furniture and stairs and getting the collar stuck. In his doped-up state he couldn't work out that all he had to do was reverse and he'd be free - no, he figured he was stuck there for life. And trying to get his ball out from under the table  was an exercise in futility. 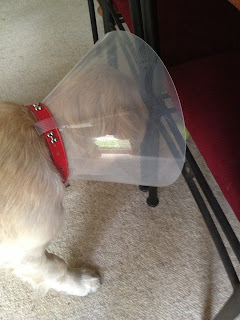 The only safe place for him was a bed and he even needed help to get up there. 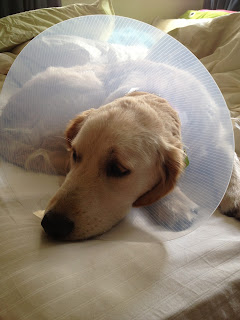 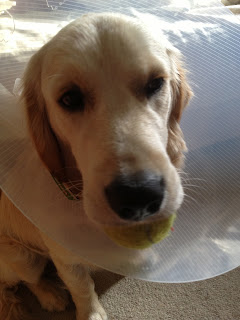 But the happiest member of the household is Bubbles. For just a little while she can beat Toby in their perpetual game of tug-of-war just by going under the table. 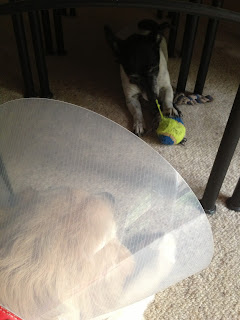 Toby wasn't the only one who saw the doctor this week. I had to go back to fill out a questionnaire so I can get a bit of money back from the government when I go to see the psychologist. Basically it was a quiz to see just how crazy I am. It asked all sorts of fun questions like are you more tired than normal (hard to answer when you've just been to a speed session), have you wanted to harm yourself (no, but I'm surprised they didn't ask about harming other members of the family - particularly ones that snore),  have you felt so anxious that you feel you can't sit still (my anxiety doesn't manifest itself in restlessness - I just do the vomit/diarrhoea thing). It was actually a fairly useless questionnaire unless you're suffering from depression and there are an awful lot of other mental disorders that aren't depression.

I didn't do too well on the test. Damn, I wasn't quite crazy enough. But my nice doctor helped me fudge the results a little just so I can be crazy in the eyes of the government. It's the first time I've ever  cheated on a test. I'm still waiting to be struck down by a bolt of lightening.
Posted by Char at 6:22 PM