I've been trying to weigh up whether yesterday was a bad, good or awesome day.

Let's start at the very beginning (a very good place to start). I had a pretty ordinary night's sleep. You know the sort - where you wake up at 1am busting to go to the loo, then argue with yourself about getting out of bed and by the time you finally give in to the inevitable you're fully awake. Then when you get back into bed you can't settle for ages and by the time you finally drift off you're asleep almost no time and the alarm goes off and in your befuddled state you can't seem to find it and your poor husband is forced to wake up at 4:45am with you. BAD!

With all my thoughts being on my B.A.D. (big, audacious, dream) which has morphed into a B.A.G. (big, audacious, goal), I had planned on getting some good base kilometres under my belt. (A little aside here - I realised how appropriate my acronyms are for marathon training. As the training progresses the badder the bags under the eyes become). I'd decided to do a route that I haven't done since I was training for the marathon in 2010. It's a lovely route - over the bridge to Chelmer, along the river to the tennis centre, back to the university over another bridge then back home. It's quiet and pretty and there's a lot of water.

As I was running along I got quite nostalgic. There was the park that I had to take a toilet break behind a tree in. There was the beautiful, low canopied tree that I hid under to, ahem, relieve myself and where I lost my red, flashy light because I'd turned it off so no one could see me disappear under the tree and when I pulled my tights down the light flipped off the waistband and I didn't really want to feel around in the dark to find it. There was the petrol station that turned me away in my hour of need so I had to use yet another tree in yet another park. It was about this point that I remembered why I'd stopped running this way. There is a distinct lack of available toilets! Luckily this was not a run where I needed one so I finished the 16.5k without any surreptitious tree activity. So I'll count the run as GOOD!

It was Thursday and Thursday is always grocery shopping day. I met Mum for a coffee after shopping and because of the 16.5k (almost 1200 calorie deficit) I felt that a scone was justifiable. But I'd had a scone just last week that purported to be a fruit scone. In my opinion two sultanas don't really justify that tag. I mentioned this to the owner and he gave me a freebie. And it was filled with sultanas. AWESOME!

And then it was time for Part 2 with my psychologist. I felt a bit of a fraud fronting up because things have been SO MUCH BETTER lately. But we've decided on a few things that I can work on so anxiety will be less impacting on my life. We both agreed that I am a control freak - a little like Clare Dunphy on Modern Family. BAD!

My therapist is also a runner and wanted to know how Melbourne went. She seemed impressed with my time and, being a competitive, control freak with some paranoid tendencies (look how many new words I've learnt since starting therapy) I didn't know if she was being patronising or not. So when I got home I Googled her and her two half marathon times were way worse than mine. Winning! Even with my really slow time. That's another for the AWESOME column.

I have NO work on my books at the moment (BAD) but I've decided to make some rhythmic costumes up for sale for the times next year when I'm too busy to take orders. This means I get to make some stuff I like and I finished one yesterday. 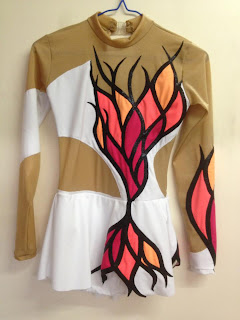 I'd like to thank Andrea for all her photos of the fall leaves in Vermont for the inspiration here.  Back to AWESOME!

And then there was time for an afternoon nap. Not just a quick lie down. It was a full-on dribble on the pillow type nap. AWESOME!

Dinner was just Iven and I sitting on the couch and watching the news. GOOD. He went to bed early (maybe because MY alarm had woken him up at 4:45). BETTER. And I got to watch what I like without knowing that he was not enjoying my choice. AWESOME!

When I finally made it to bed I found Iven wrapped like a mummy in all the bedding, snoring. BAD! But in extricating some of the sheets I got him to roll onto his side and the snoring stopped. GOOD! And then I had a really good night's sleep. AWESOME!

So adding them up I'd say that yesterday was pretty awesome really. How was yours?