I've spent a lot of time in the last couple of days admiring my achievements of last week. My lovely new medal (which looks a lot like my Melbourne medal from last year apart from a new ribbon) and my shining, clean pantry. It's been so fun that I've almost thought of putting a hook on the pantry door to hang my medal and I can kill two birds with one stone.

But a s great as it is to dwell on past glories, it's important to keep moving forward. So I tackled another job that I'd been putting off for a long time. Actually, I'd been putting my head in the sand about it hoping it would just go away.

A few years back Sam was given a beautiful set of knives for his 21st birthday. And, wanting to take good care of them, he bought a knife block. This way they wouldn't have to mingle with the inferior knives in my cutlery draw. But this knife block has been the bane of my existence. Every time I clean the kitchen bench I find gritty black bits under it. I'd wipe them away and the very next day they'd be back. And I really didn't give any thought as to what could be causing those bits of grit ... until Monday. 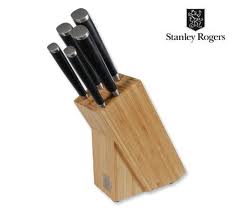 On Monday I decided to take action. I saw a cockroach disappear under the knife block and finally worked out what those bits of grit were. I had some insecticide and I wasn't afraid to use it. That cockroach's days were numbered.

I pulled out the knives and sprayed up the knife holes and what I discovered still makes me shiver with disgust. There was a whole village of cockroaches living in that knife block and I'd effectively performed genocide. Cockroaches of all shapes and sizes crawled gasping from their previously safe haven only to be sprayed directly and die an ugly, painful death in my kitchen sink. 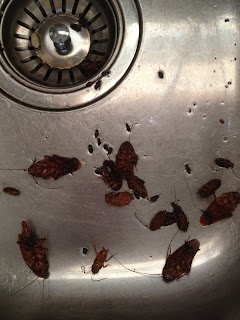 Another successful mission completed. Maybe I should mount one of the cockroach corpses next to my medal on the pantry door - as a reminder to me of a very good week and a warning to all cockroaches.

Yes, this is the same kitchen that all my baking gets done in but before you gag in revulsion, I have some very stringent rules in place so no vermin ever gets baked into a cupcake. Firstly I upturn all of my cake pans so any little bits of grit all out and then I do a visual check to make sure. And really, when people see my cupcakes, cockroaches are the last thing they're thinking of.

I found a really great icing recipe on Pinterest the other week and had to give it a go. It claimed to be the smoothest, creamiest buttercream ever. And it really was so I'm going to share it with all of you.

Beat the butter until it's white. This will take 7-10 minutes. Then mix in the other ingredients in two batches. And beat until fully combined and creamy. Simple and easy.

I used the one batch to decorate 30 cupcakes and two other cakes so it makes quite a lot. And I stored some of it in the fridge for a couple of days before bringing it out to decorate the other cakes. Once I'd beaten it up again  it was just as good as it had been fresh.

My mission to do another marathon started yesterday at speed. Coach Chris has been starting the session 10 minutes earlier and it's amazing just how much extra torture he can fit in those additional ten minutes. It was 800m reps yesterday. Oh joy of joys!! The only nice thing I can say is that I like them better than 1500m reps. I managed 8 reps in the time frame all in a fairly even pace of between 4:44 and 4:49/k.

I still haven't had my chat with him but I'm leaning towards the Canberra marathon. Not least because I can enter the marathon but drop down to the half if things aren't going well. One of my squad-mates has sworn that the hills aren't too bad. But he did Comrades so I don't know if he has the same perspective on hills as me. Needless to say - hills will be included on some of my training routes.