I'm heading down to Melbourne in just a couple of days. I'm planning on doing a little run down there with about 8999 other runners - give or take a few. It's always been one of my favourite events and I didn't want to miss out this year despite my body not being its most cooperative. It's a really well-run event on a pretty flat course and Melbourne is always a great place to visit. In fact it's the site of my greatest running triumph.

Four years ago I was running really well. I'd been in the squad for a year and had done everything that Coach Chris had scheduled - hills, trails, beach runs, long runs, speed sessions and races. I'd brought my PB for the half marathon down from 2:01 to 1:47 in May that year but it was October and I was hoping that those extra 5 months had allowed even more improvement. I really wanted to run a 1:45 - that was my public goal. My secret, not-said-out-loud goal was to run 1:44 which would have qualified me for the New York marathon (I wasn't actually planning on running NY - I just wanted to know that I could qualify).

My wonderful sister Julie had said she'd come down with me for support and to have a mini-holiday. We got there on Friday and after getting rid of our luggage we did what every other normal female visiting Melbourne does - we went shopping. We shopped and walked for hours. It was great! But shopping and walking isn't the greatest way to spend time before you're planning on running a half marathon. I finished the day with aching legs. They were so uncomfortable that I took pain-killers that night. And they were still a little painful the next morning and I started to freak out a little (I'm an expert in freaking out). We'd planned a day of sight-seeing which meant more walking and I really didn't want to run a half marathon on exhausted legs so I very-selfishly baled on her and spent the day in my room - reading and resting.

Luckily on Sunday morning my legs felt normal. We met up with some running friends in the pre-dawn light to walk the kilometre or so to the start line. We found the toilets, did what we had to do, walked over the bridge with thousands of other excited runners and found a spot in the crowd. It felt like no time till the race starter was giving instructions and the hooter went off. Finally we were moving.

A running friend had given me a little piece of advice before the event. She told me to take the first kilometre slow and relaxed, to warm into it and then build. That was no problem. There was so much traffic that you couldn't really run fast so I just enjoyed the atmosphere. I hit the 1k mark in around 6 minutes - way slower than what I'd planned. This was in the days before I had my Garmin. I had a Nike plus sportsband which gave me some feedback on pace so I just kept checking every so often and trying to keep it around 5 min pace or a bit below.

I had no beep every kilometre like I do now to let me know how fast each kilometre was. I hadn't worn a pace band. I can't do maths while I'm running. So for the most part I had absolutely no idea how I was travelling. I just kept looking at the pace number and almost every time it was reading a number that started with 4. It was comfortably hard but I never felt like I was dying (a feeling that I've unfortunately become very familiar with in the last couple of years).

We ran down St Kilda Road to Albert Park, around the lake and back up St Kilda Rd to the MCG (Melbourne Cricket Ground). As I got to the 18th kilometre marker I managed to work out that if I kept up the pace I was on I'd definitely make the 1:45 mark. Three kilometres doesn't seem so far when you know that your goal is in reach so I kept pushing the pace and the kilometres kept ticking down.

With less than a kilometre to go I saw my sister watching for me. It was one of those moments - I was almost overcome with emotion but I still had a job to do. I ran down through a tunnel and onto the hallowed turf of the MCG, around the boundary and through the finishing arch where I stopped my watch.

1:42:51!!! It was faster than I'd ever secretly dreamt I could do. I was elated. I rushed through the tunnels under the stands and went in search of my sister and running friends so I could share my elation with them. There was a long flight of steps to get up to where I needed to go. A lot of other runners were hobbling painfully up them but I was feeling great! I'd just run a huge PB and I was invincible. I took the stairs two at a time and managed a whole two before CRAMP!! And then it was me who was hobbling painfully up the stairs, ruefully laughing at myself. 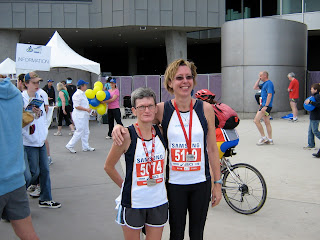 Melbourne won't be filled with glory like that this time. But it will be filled with a different type of glory if I manage to finish the race. When I think back to the beginning of March and starting back running - where 500m seemed like such a long way and I wondered if I'd ever be able to run more than a kilometre in a stretch - just finishing the race will be enough. My pride has well and truly been stowed away. It's all about just being there and participating.
Posted by Char at 6:42 PM