Don't Mess With Me

I had an interrupted night two nights ago.

Iven was re-enacting the Texas Chainsaw massacre in the bed next to me but without any blood or killing. Just sound - no pictures. I'd been asleep for only an hour and half and no amount of prodding was effective in getting him to roll onto his side. 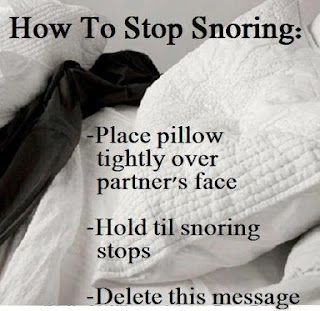 So I did what any marathoner-in-training-who-needs-their-sleep would do. I crankily picked up my pillow, stomped out of the room and walked down the hall to the only spare bed in the house (that's only spare because #3 son is house-sitting).

It was NOT FUN having to warm up another bed. And it was NOT FUN remembering that #3 son hadn't changed his sheets probably since the last time I changed his sheets because I couldn't stand their mankiness. That would have been over two months ago and I was pretty sure that the white sheets were no longer white. And that they may have had microscopic things crawling in there eating my dead skin cells. Exfoliation by dust mites isn't a beauty treatment that's particularly desirable.

It took me a long time to get back to sleep.

I finally got up at 7:30 am, feeling a little hungover from broken sleep. Walked up the hall to find our bedroom door shut and when I opened it there it was ... an unmade bed!

I know it's not a big deal in the scheme of things but in our house who-ever gets out of the bed last has to make it. Iven had broken one of the unbreakable rules. And it added insult to injury to have to make it after not being able to sleep in it. And the worst part about it was not being able to vent!

I texted him a very curt message (which he didn't read until he got home from work that afternoon). But that wasn't good enough so I spent the rest of the morning trying to plot my revenge.

I am not very creative in the vengeance department. All I could come up with was tampering with baked goods or re-tuning the TV and making sure his favourite station wasn't there any more.

And then I had a stroke of genius. I completed his puzzles (Sudoku and the crossword) in the paper.

Yeah - that showed him! Don't mess with me cause I'm ruthless with a pen.
Posted by Char at 8:00 PM