You'd think that last weekend was all about getting this - 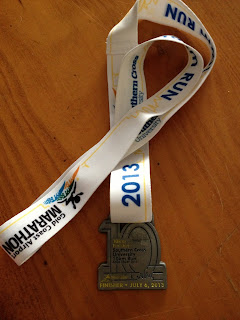 I guess a lot of it was about getting that medal but it ended up being so much more. There's way too much stuff from this weekend for just one post so today I'm just going to focus on Saturday morning - my ninth 10k at Gold Coast.

I think Natalie, my BFF, was a little horrified when I told her on Friday night that I wanted to be at the GaleForce tent by 5:30am but she hid it well. That meant setting the alarms for 4:45. But a restless pre-race sleep always means that I'm up before the alarm goes off anyway and so was she.

She lives only 3k from the start line so we were there quickly and parking wasn't an issue. Two little worries ticked off the list. All the GaleForce 10k runners were pumped and ready to go - well, they were ready to go whether they were pumped or not. We made our way up to the start at about 6:00 am but because I took a detour via the porta-loos (mercifully short queues and another little worry ticked off the list) I managed to lose everybody. Still, it wasn't hard to find where to go - just follow the hoards of people.

The hoards of people led me right to the back of the C section. My bib had A on it so there was a lot of dodging and weaving through the crowds to get myself up to the next tape. The lady bouncer took a good look at my bib and told me I still had a long way to go. More dodging and weaving through anxious, excited runners and I made it to the next barrier where I was given safe passage to the promised land - section A.

When I entered the race a few months ago I'd had to make a decision on which section to self-seed in. I'd run the event in 55 mins last year but was running so much better this year. Still, the remnants of self-doubt were there and, although I've had some promising training runs, I was still concerned about what I should aim for. But last year I'd been in the B section and had had to spend a few kilometres dodging and weaving so I decided to back myself and put myself in the sub-50 minute A section.
Compared to the other sections the A section was quite sparse. There were a lot of young, fit runners there. And there were no other GaleForcers to chat to and while away the minutes till the gun went off. I went over my race plan in my head. Don't go out too hard and try to run each k under 5 minutes - pretty straight-forward but not always easy when the going gets tough. All I wanted to do was go sub-50 and prove to myself that I did belong in the A's.

I didn't bring my music - you'll be proud of me Coach Dion. First time ever running Gold Coast naked! I could hear every word over the loud speakers because I was so close to the start line. Simple starting instructions - ready then go with the hooter.

And we were off. I kept telling myself to relax and not push too hard. And that's what I did - enjoyed the blue skies, the energy from the runners around me and the encouragement from the spectators. I also loved having a relatively clear path. Being so close to the front meant that I wasn't having to try to get around slower runners. It wasn't too congested and I was able to get into a good rhythm quickly. I got to the first kilometre in 4:58 feeling good - perfect.

From there it was all about trying to pace well. Second kilometre came up in 4:49 - maybe a little too fast. Ease it up a bit. Yep, that feels strong without being too hard. 'If you close your eyes it almost feels like you've been here before.' Thanks a lot Bastille for today's ear worm. Maybe I should have brought my music after all.

The next kilometre marker came up sooner than I expected. And so did the fourth, fifth, sixth and seventh. Each time my watch beeped I looked down and it read either 4:53 or 4:54. Consistency is a wonderful thing.

Somewhere between the fifth and sixth kilometre I started to feel the familiar, unwelcome feeling of a stitch starting to build. I haven't had one in races for years and in the past it's meant I'd had to slow right down to finish. I did ease up a little and focused on exhaling fully and trying to relax. This seemed to work and the stitch settled for a while. But it came back in the eighth and ninth kilometres and I did have to slow a bit to get through - 4:56 and 4:58. I knew, though, that baring some sort of catastrophe that I should make it to my goal.

The last kilometre is always hard but it's always the best at Gold Coast. The GaleForce tent is set up about 700 metres from the finish line and you know that you're going to get a little boost along from the squad at that point. And I did but I wasn't expecting the extra cheer with only 200 metres to go from Chris and Karen who'd got a great vantage point. They really pushed me all the way to the finish line. 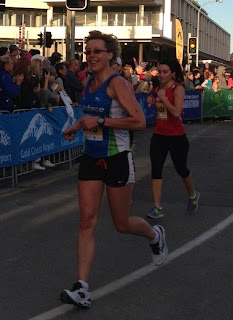 I entered the last bend of the finishing chute (seriously the longest finish ever - turn left, right, left then right again and down about 100m to the finish line) and I could see that the clock had just ticked over 49 minutes. One final push to the line and I was done. Gun time - 49:43. Chip time - 49:17. 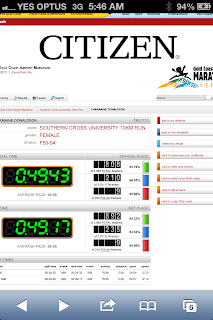 And the extra special bonus was that I didn't want to throw up when I finished. Hmm - maybe should have pushed even harder.

The results came out later that afternoon and I have to say I was thrilled with my placing - ninth in my age group. Couldn't have been more perfect for my ninth event.