Firstly, thank you to everyone who commented on my last post re the running nausea. I'll definitely be looking into the ginger gummies to try on my long runs. And the dietitian referrals were also appreciated Liz. I'll be looking into those. 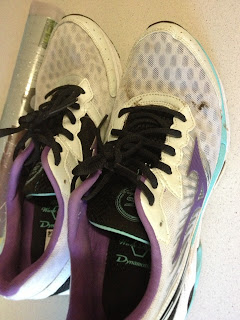 What's wrong with this photo?


If you said the little bit of mud on otherwise pristine shoes then you'd be right. Sad face! My new shoes no longer look new. But considering that today was officially the start of my Melbourne training maybe a little mud's not a bad thing. They're only going to get dirtier as the weeks roll on so I may as well get over the disappointment early. It's a little like getting the first dent in your brand new car - a pity but inevitable.

The training session was quite a restrained one as far as speed sessions go. I think that Coach Chris is getting soft (and I think I'll pay for that comment next week at speed because he generally reads these posts). I couldn't believe it when he said we were doing 500m reps with 500m recovery. Usually it's something inhumane like 400m reps with a 50m recovery or 1k reps with a 100m recovery but I guess it was the first speed session back after Gold Coast for a lot of the group so it was a matter of easing us back into it.

Long recoveries are awesome! They let you push yourself that little bit harder on the rep while knowing you'll have plenty of time to recover before you have to do your next. But in saying that it didn't seem that much easier while I was actually running the rep. Every time I'd get to the spot where I knew it was only 200m to go and I'd be thinking 'just hold on and keep your legs moving'. Then for the first 200m of the recovery I'd be wondering if I could do another anywhere near as fast but by the time I'd hit the 500m mark I'd be raring to give it another shot.

Strangely there was no music playing in my head today. Maybe it was because the songs on the radio on my trip over were ones that I didn't know. Or maybe I need longer reps to get my inner gramophone working. (For you sweet young things who don't know what a gramophone is, think old-style MP3 player without the portability or the clarity of sound)

It was interesting to compare my times with older sessions. At the end of last year I'd done some 500m reps and they were all in the 2:25 -2:30 range. Today's session ranged from 2:09 to 2:13. A graphic demonstration of the benefits of a normal hormone balance.

Because last week was so light running-wise I had to resort to other means of getting my happy fix. Butter, sugar, flour and eggs plus a little inspiration are all that's required. A sugar high's pretty much the same as a running high isn't it?

Last week's creations were The Kryptonite (thanks for the great name Lauren) They're my favourite chocolate cupcakes but the twist is the centre of choc-mint ganache, the choc-mint buttercream and the crushed peppermint crisp on the top. 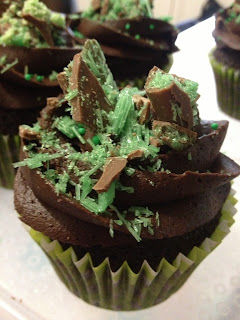 And for those who are fond of desserts, here's one in cake form - Apple Crumble Cupcakes. I used my vanilla cake recipe and added cinnamon instead of vanilla then put a layer of stewed apples (just apple - no sugar) in the middle. The icing was maple syrup and cinnamon buttercream with a generous topping of crumble. 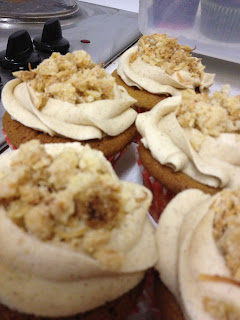 It's just as well I'm back running more this week because my jeans may have started to complain if I'd had to continue to taste-test new creations.

So how do you other runners cope when you're not running as much?