I had a hard time wrapping my head around what time I had to set my clock for this morning. 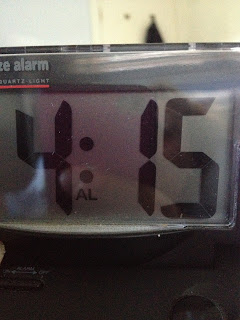 Yes, that really is a.m. And I even woke up before it went off. Just call me an over-achiever.

Why was I waking up at this ungodly hour? 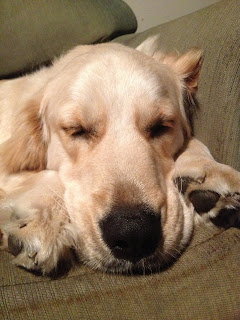 Toby had no answers to that question. Not even turning the light on and poking him was going to get him up. His internal alarm doesn't go off until at least 6 am and even then he pushes the snooze button a couple of times before the sound of dog food hitting his bowl rouses him from his dreams of world domination where deforestation is outlawed and butt-sniffing is de rigueur.

I had to get up early today to get to the first longer run of marathon training.

Early is a relative term. I actually thought getting up at my usual 4:45 am was early. And, seeing as it's still pitch black outside I'm happy to still call it early. But if I was to run most of my 24k in company I needed to get 4k done before meeting the group. Yes, I could have gotten up even earlier and gone out with the group that left at 4:00 am (and I will be doing that in the up-coming weeks) but it was hard enough wrapping my head around the 4:15 alarm. I have no idea how I'm going to cope with one that starts with a 3!

One of my squad friends had kindly volunteered to meet me early so I wouldn't have to run alone in the dark so that's how I found myself loitering in the dark car park of a bottle shop at 4:55 in the morning. The things I do!

Helen and I managed a nice easy 4.5k before getting back to the bottle shop car park by 5:30. Funnily enough it didn't seem quite so dodgy to be hanging around there when there were lots more runners around. And it felt pretty good to have a few k under my belt before setting out with the group.

It was good to have company to 14k. It was good to have someone to discuss the aesthetic virtues of low-cut running tops and non-supportive running bras versus the long-term damage to breast ligaments and the potential for topless photos that look like they're out of National Geographic. Gravity can be a bitch.

The stretch home was a solo effort - even without the dulcet tones of Buble, Manhattan Transfer and Newton Faulkner to keep me company. And it went surprisingly well. Sure, I got a bit tired but I think that's pretty normal for a run that long. But I was nowhere near as tired as I used to get last year for runs even as short as 12k. And I finished knowing that I could have kept going (but happy I didn't have to).

My knee held up remarkably well. I'd used some Rocktape (same type of stuff as Kinesiotape) and I've been doing my strength stuff all week. There was no pain during the run and, even better, no pain after I'd finished.

The solo run home was a reminder of exactly why I wanted to do another marathon. I secretly love doing the training. I love feeling hard-core seeing those big numbers tick over on my Garmin. I love adding up the totals for the week. I love pushing myself through the tough parts of the run and feeling like I've won every single time I meet my goal. And I love seeing how many calories I've burnt by the end of 150 mins of running. Yes, I don't mind if I do have that piece of chocolate.

And I really, really love that post-run, Saturday afternoon nap. Where you sleep like you've really earned it - because you have! 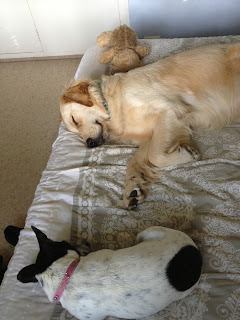 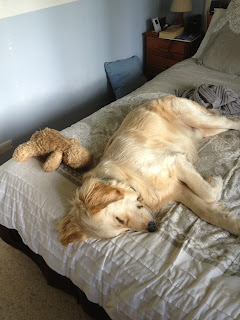 And I'm not the only one who loves those Saturday afternoon naps.
Posted by Char at 1:19 AM