After my 'near death' experience the other night I'd like to report that I'm feeling fine and fighting fit again. I'm pretty sure it was viral gastritis and apart from having to miss a run yesterday because of a killer headache, it hasn't impacted my training. I'll be lining up again tomorrow morning at 4:00 for my next 28k adventure.

I've been a parent for a really long time now. Nearly as long as I've been a married woman (but not quite so you can get your collective minds out of the gutter - I was a good girl). And for all of you out there contemplating parenthood I'd like to share a little of my wisdom.

There are certain skills that one must possess if one is to be a successful parent. You must be able to provide physically for the needs of your offspring - feed, water, clothe and shelter them. That's the obvious and fairly easy part. Then you also must provide the emotional stuff and the discipline so they won't become psychopathic serial murderers who will practise on you before heading out into the general population.

Most children like to test their parents so it's really important to nurture stubborn self-centredness (in yourself, not them) as a personal trait. I find that obsessed runners are naturally imbued with this characteristic so we can generally out-last a two year old shopping centre tantrum (unless we've just completed a 20k run after a night of broken sleep and our defences are a bit down).

It's also important to be able to emotionally blackmail your kids. This is the fun part of parenting - when you get them to do something that they don't want to with the power of a few words. As an ambitious Little Athletics mother, I used to manage to get the kids to win either gold or silver for their age groups even if they weren't the most talented athlete by ensuring that they were there every week. If they had a conflicting birthday party I'd say that it was fine for them to go but they probably wouldn't end up getting a medal at the end of the season and surely it was better to miss out on a silly old birthday party to bring home the bling. It usually worked and taught the kids valuable lessons like prioritising and delayed gratification. And it saved me heaps of money on birthday gifts. It was win-win!

You also need to know how to bend the truth - to just give them enough or totally fallacious information so they'll stop annoying you. I used to think that I was good at this.

The other day Josh (#2 son) found out he was expecting imminent arrival of a phone he'd ordered. Josh hasn't had much luck with phones of late and was actually without for over a fortnight before he gave in and bought yet another one. Of course he was excited to know that his time in the communication wilderness was soon to be over.

He went off to work having informed his father and I to expect the delivery soon and to let him know when it arrived. But it wasn't long before messages started arriving (he'd REALLY missed having a phone).

The first message just asked if it had arrived. I said no but would let him know as soon as it arrived. 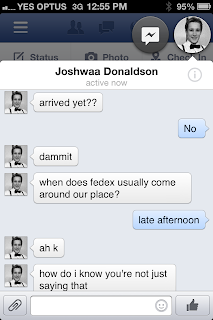 My response that Fed Ex didn't arrive till late afternoon was a total, out-and-out lie. But it was a lie with noble intentions. And of course my intention was not to have to answer the same question hourly for the next four or five hours. Yes, I'll admit it was self-serving. And years ago it would have worked. But Josh is 24 now and you can't pull the wool over a 24 year old's eyes like you can a 10 year old, as you can see from his response. 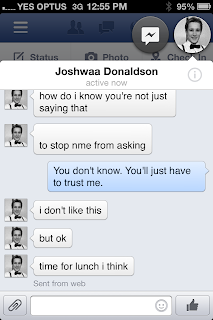 Suspicion and distrust! And his instincts were 100% correct. I'm not sure if I'm sad (that I no longer have the upper hand in matters of psychological warfare) or proud (that my baby is street-wise and can be let out into the world safe from those who would want to take advantage of him).

That's one weapon gone from my arsenal.
Posted by Char at 6:17 PM