Sitting is the new smoking.

I've been hearing about this for a while now but I'm good at ignoring stuff that I don't want to hear. I'm comfortable sticking my head in the sand. Especially when it means that I won't have to change what I'm doing.

Unfortunately the article in Runner's World was one that I couldn't ignore. I wanted to believe that my few hours of running every week was enough to allow me to sit on my butt for the rest of the day. But the article was quite clear - don't think that exercising for an hour or so a day will wipe out the negative effects of sitting down for all those other hours. 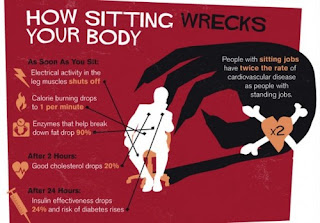 I have a very sedentary job. I sit and sew or cut out fabric all day. A few years ago I was having back issues and standing up at a low table cutting out just aggravated them. Sitting down didn't. So I'd sit down to do my cutting out. Once I got sick I didn't have the energy to stand most of the day so I'd alternate between sitting down and lying on the bed to get enough energy to see me through the rest of the day.

Effectively it's like I've been a chain smoker for a decade. But without the bad breath or the nicotine stains on my fingers or the hacking smokers cough.

One of the many reasons that I run is because there's a history of heart disease in the family. My Dad had a heart attack in his 30s and both my maternal and paternal grandfathers had heart attacks in their 70s. I don't have a great pedigree for heart health so since my late teens I've been pretty diligent about doing cardio exercise. I've run, walked, gone to the gym (back in the 80s in the fluoro g-string era) and I'm back to running again. But I obviously haven't been doing enough.

So this week (I read the article on the weekend) I've been very diligent about moving more when I'm working. I've been standing rather than sitting. Walking to choose fabric rather than propelling myself around the room on my stool on wheels - which is probably safer for the dogs who like to sleep on the workroom floor. And I've been making extra trips up and down the stairs to do little chores when I think of them rather than saving them up to do in one hit.

And I've been feeling very virtuous about making these positive changes. I'm actually feeling better at the end of the day than when I've spent most of it warming a seat. My legs don't feel as stiff and my hip flexors are definitely looser. And strangely, I feel more energetic.

Then #2 son Josh sent me this link about the evils of sugar. Yes I know sugar isn't good for me. But again I kinda hoped that running would negate any nasty effects. And I had also hoped that training for a marathon would give me carte blanche to eat as much as I wanted (cause I have a bit of a sweet tooth). But if I do eat too much sugar, again I'm risking cardio-vascular disease and even my mental health. And let's be honest, sometimes that can be tenuous even without the addition of that delicious, sweet poison. 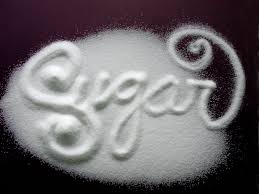 Now I'm not feeling quite so virtuous. Looks like there are other changes that I have to make.

Unfortunately I'm not that great about denying myself altogether. If I tell myself I'm not allowed to eat something then I want it all the more and end up eating way too much of it. So my plan is to cut back on those extra sweet treats that had crept into my diet and substitute them with something with more nutritional value but let myself have something sweet with my cup of tea after dinner (then brush my teeth so I'm not tempted to have more).

Ah for my perfect world where sugar would be a health food, the weather would always be perfect for running and no undies caused chafing ever.
Posted by Char at 6:43 PM