The Sunshine Coast Half Marathon

Why is it just so hard to sleep the night before a race???

The answer is in the question. It's all those question marks. How has my training been going? Was I consistent enough? Did I work hard enough? Will I sleep through my alarm? Will I choose the wrong portaloo queue? Will my stomach behave itself? What pace should I go out at? If I pick the wrong pace will I die towards the end? How much am I willing to hurt? How tough am I?

I did my last half marathon before Melbourne yesterday and I had absolutely no idea what to expect. I've been doing some big mileage weeks so I was coming into the race without a taper and I'd never run this event before so I wasn't sure about the course or how I'd cope with doing a double-lap.

We left on Saturday and arrived at the Sunshine Coast to this.

And this at the place we were staying at. 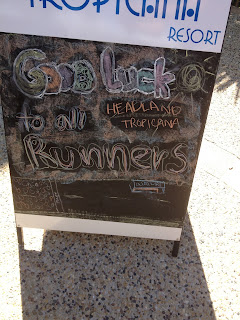 I hadn't realised that our accommodation was as close to the start as it was. Just a few hundred metres up the only hill on the course. The receptionist was lovely. She drew me a map of the course and wished me good luck. She was going to be there in the morning supporting her husband in the same race.

There were no nerves on Saturday. I hadn't been thinking about the race much and certainly wasn't putting any pressure on myself. I was a little bit worried about the hill but because it was at the beginning of the race I was planning to just take it easy and use it as my warm up. And besides, the salesgirl at the shop I bought a t-shirt from (because I'd packed totally the wrong clothes for the weather) told me that I'd hardly even notice it with the excitement at the start.

But even though there was no nerves, I didn't sleep well. All those pesky questions swirling in my brain. And no answers to any of them.

Iven and I were out the door the next morning just before 5:20am. It was dark and cool but the skies were just starting to lighten. 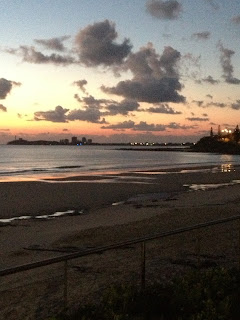 I found Coach Chris. I found the shortest but slowest moving toilet queue. Then I tried to get a good position in the buzzing throng of runners. (Which leads me to ponder the question - just what is the collective noun for a group of runners? I would have said stampede but that only seems appropriate once the gun goes off). A blessedly short wait and then we were off.

The salesgirl turned out to be right. The hill really wasn't that bad. I was just running comfortably like I'd planned to (and not like I'd run in my last half at Redcliffe, where I'd gone out way too hard and then died for the last 5k). We ran up and over it and as soon as we got to the bottom we u-turned and ran up and over it again. And that was it - all the hills done in the first kilometre and a half. My first k ticked over at 5:19 and the second (which included a nice downhill) and less manoeuvring around slower runners, was 4:58. It was on par with what I'd run at Redcliffe which worried me a little but I was feeling okay so I tried to quash the worry and go with how I was feeling.

Twenty one kilometres is a long way. Honestly, most days I wouldn't even drive that far. Running that far requires patience and persistence. There's a lot of time to talk to yourself - in your head, not out loud because that would make you look like a crazy person and a lot of the general public consider running that far an act of lunacy in itself. My self-talk was about running relaxed, keeping the pace controlled, keeping my shoulders down, not frowning, staying positive, running tall.

You'd think it would get a bit boring but there were plenty of distractions - watching the marathon runners coming the other direction, the people staring at us from the cafes, the excited dog who seemed like he just wanted to join in. And then there was my husband (who has a reputation for totally missing me in races) at the 6 or 7k mark waving my jumper and telling me I was looking good. A runner next to me remarked that it was just the first lap and there was plenty of time for that to change.

It was then that I finally let myself look at the total time on my Garmin. I had about a kilometre to go and it was reading 1:41. I was going to go faster than I had at Redcliffe! The last kilometre was 5:10 and then it was a sprint to the line - a slowish sprint.

I stopped my watch. Over two minutes faster than my last one.
How great do you feel when you surpass your expectations? How amazing is it to run this well after being sick for so long? Coach Chris commented that my smile was huge when I got back to the group and I swear it stayed that way for the rest of the day.

I wasn't the only one to have a good race. There were two others from the squad who ran the half and both ran a PB. The 10k runners ran a lot later and it had really heated up so the conditions weren't quite as conducive to fast times. But there were still a lot of happy, smiling people.


There were only a couple of negatives from the weekend. The water at the drink stations were really heavily chlorinated so I stopped drinking part way into the second lap and ended up a little dehydrated and headachey later in the day. The ice cream shop that I'd planned to go to for my post-run treat was shut! Who closes an ice cream shop at the beach on a warm day when there's a big event on?? I did get some ice cream but it wasn't as good as the other place. And my aim was totally off when I tried to toss a half-full cup of water into the garbage bag a volunteer was holding open. She ended up wearing most of the water. Oops.

I slept like a log last night. All the questions from the previous night had been answered to my satisfaction. Things are looking good for Melbourne. 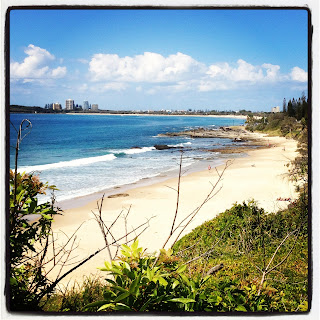