A Vent And A Laugh 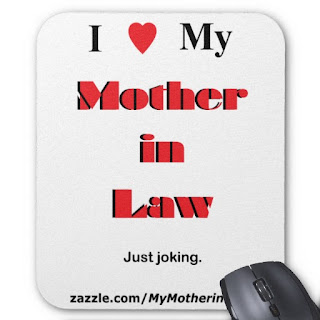 I just needed to have a little vent today. And I know it's totally safe to vent in this very public forum because the people I need to vent about are dinosaurs when it comes to technology.

And the people I need to vent about - In-Laws!!

Most of us have them and they can certainly be a mixed blessing. Personally I think the reason I find mine so hard to get on with is because there's a huge disparity in the way we treat people. When I make plans with other people I try to stick with those plans. Sure I might be 5 minutes late sometimes but I try to respect others enough to not let them down.

About a month ago Iven found out that he needed to take holidays soon or lose them. I'm not fond of him being on holidays when I'm not, seeing as I work from home - feels like he's invading my workspace and slowing me down. So I suggested he go visit his Mum and sister for about a week. They live in Gunnedah which is about 8 hours drive from here. Iven hates the drive but his Mum's 93 now so it's important for him to see her at least once a year.

So Iven did the right thing. He rang his Mum and confirmed a date before booking his holiday. He was set to leave here on Monday. Friday night he gets a call from his sister saying he can only stay for two days now because they've decided to take a trip.

What?? Who does that just two days out? And when Iven can't change his holidays for a more convenient time?

I'd been not so secretly been looking forward to my mini-holiday. Having the bed to myself. No snoring. Not having to cook dinner if I didn't feel like it because cereal makes a perfectly adequate night time meal. And the trade-off - feeding the dogs and putting out the rubbish is totally worth the blissful sleep. So I'm not proud to admit that I had a little tanty (okay - a pouty, full-on tantrum) on Friday night. But I swear some of it was because of the cavalier way that they'd treated Iven.

So poor Iven's been stuck at home with a sulky wife, no plans for his holiday and no one to do stuff with. Fun times for him!

On to something a little bit lighter. Having sons.

Sons can be basic and gross at times but boy can they make you laugh.

Son : So Im just waiting at the bus stop with my headphones in and im feeling a tiny bit gassy so I let our a sneaky silent one. I turn around a minute later and realise theres a small asian girl behind me and I dont know how long shes been there.. a minute later shes another five steps away from me.. I hope she was just getting out of the sun..

Me: Ha ha ha
The perils of being tall. And I'm just wondering about her nose to your butt height ratio.

Son: Yeah well considering we were on a drive way slope as well the ratio reached deadly.

Like mother like son (I'll admit to having the same experience in a supermarket queue). But I'm proud of my boy. Not for the flatulence. But for feeling just a little shame.

Do daughters do this?
Posted by Char at 6:27 PM