It's Monday morning and for a change I'm right on top of things. I've planned my dinner. I've baked cakes for this week's birthdays.

I've planned tomorrows dinner (which was going to be tonight's until I was inspired to make something different). My laundry is empty of washing. My house is tidy. And I've got just a little time before I need to start work to write.

And the reason for me being so together and organised? I have no idea.

It could be this - 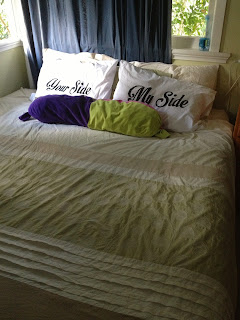 This is the bedroom of my #2 son. And at the moment it's immaculate. Neat. Tidy. Floor able to be walked on without fear of twisting my ankle on some hidden peril under dirty clothes. And it's going to stay this way for the next three weeks. We put him on a plane to Taiwan yesterday for a holiday with his girlfriend. I'm sure he's going to have a great time being shown around Serena's home town. And I'm going to have a refuge just in case I need to escape from a noisy bed.

The bedroom of my #1 son is in a similar state. He's doing prac work for his degree at a hospital at the Gold Coast and so he's away from Monday to Friday for the next few weeks.

The only one left at home is Luke (#3). It's almost like we're empty-nesters. And can I say I'm quite enjoying the novelty. Tidy house. Less cooking. Fewer groceries to lug upstairs and not running out of things so often during the week so less trips to the store needed.

The only negative is that there's fewer people to eat my baking. And the leftovers. There's been quite a lot of leftovers because I'm not used to cooking for less than five people. Thank goodness we've got dogs and a hen - giving them the leftovers is way better than throwing them out.

Actually there is another negative - in as much as I'm loving the peace and order in the house I'm missing my boys/men. I've spent the morning wondering if Josh made his connecting flight from Manila to Taipei and worrying (just a little) that he'd be nervous or lonely because he's doing this first flight by himself. I'm expecting that I'll hear from Serena within the next couple of hours to say he's arrived safe and sound. And I miss having Sam fill me in on his day every evening.

At least I have training to keep me occupied. And being so organised means I have extra time to put my feet up and rest - I seriously needed that this weekend. I had another 32k (20 mile) run on Saturday and it was a shocker. Actually it wasn't entirely a shocker - just the last 5k. I'm not sure what the issue was but with about five k to go we stopped at a water bubbler and I started to get light-headed. I had to keep moving so I wouldn't faint. When we started running again, it all seemed way too hard and when I finally made it back to our starting point I felt giddy again and a bit nauseated. The rest of the day and a lot of yesterday I was just tired, headachey and a bit sick but today I'm feeling pretty good again.

I'm not sure what was causing the vertigo. Could have been that I had low blood sugar. Or was dehydrated (it was our first warm and humid run for months). We may have taken it out too fast. I may have still been feeling the effects of last week's race. Or I may have had a virus. Either way I'll be taking it very cautiously this week and pulling back on the intensity.

Has anyone else had problems with vertigo during or after a run?