The third time's a charm, or so they say. And this was definitely true for my third and final stupidly long run.

The first two 37k-ers were grinds. Sure I made the distance but there was pretty much nothing left in the tank (as demonstrated by my wanting to faint at the end of both of them). And because I'm a realist and ascribe to Dr Phil's theory that 'the best predictor of future behaviour is past behaviour' (I get to watch a lot of daytime TV with working from home - I'm not proud of it but it is what it is) I tend to think my next run will be equally as bad.

But something happened in my head this week and, rather than dread the three and a half hours ahead of me on Saturday, I just gave myself over to it. I knew I'd be able to finish it and once it was done I wasn't going to have to run as long until marathon day.

Preparations for Saturday's run start on Friday. When my alarm went off I set it to 3:15am. Then it was all about making sure I had the right fuel on board. Quinoa and chicken salad for lunch, chicken stir fry and brown rice for dinner. Can you tell that chicken's my favourite protein? I didn't bother with going to bed too early. It just doesn't work for me - I lie in bed telling myself to go to sleep and end up tossing and turning for hours. But I managed to convince my dearly beloved that it would be in everyone's best interests for him to sleep in another room. I got the best night's sleep ever!

I got to the 29k mark feeling fairly fresh. Last week I'd had to stop and walk for a while here because I was starting to feel nauseated. Then every kilometre after that I had a little internal celebration that I was still feeling good.

We'd started the run aiming at around 6 minute kilometres but somewhere around the 24k mark it changed and the pace picked up slightly. All bar one of the last 13k were in the 5:30's and 5:40's. I felt strong and confident that if I had to run an extra 5k (which I will have to in 3 weeks time) I'd be able to do it. And best of all Elio (my running partner) didn't have to catch me at the end of the run - no light-headedness!

The only questions left to answer are the ones about goals and pacing. When I decided to attempt this earlier this year my main goal was to finish the race as a way of putting a big full stop at the end of a couple of years of bad health. Just being able to complete the training was going to be a huge victory in itself.

Now, having done the training and feeling stronger and fitter than I have in years, you'd think my goals may have shifted a little. But you'd be wrong. The last couple of years had such a huge impact on my life that I am excited and extremely grateful just to make it to the starting line. Yes, I plan on finishing - that's my A goal. If I can finish without walking and without getting lost in an Art's Centre looking for a toilet (yes, there's a story behind that) then I'll be ecstatic. And if I can go under the 4hrs and 6 mins that's my current PB then I'll be ... I have no superlatives to describe how that will feel. What's better than ecstatic?

I'm going to be a little bit sorry when it's all done. I've, weirdly, enjoyed pushing myself. Getting up when it's still night and pounding empty streets with like-minded comrades. And I'm not the only one in the family that's going to be sorry when it's done. Luke, my youngest, was laughing watching me hobble around the kitchen trying to put away vegetables in the crisper on Saturday. He told me that he loves Saturdays because I'm so entertaining. Glad I could be such a source of amusement to you Petal. Planning my revenge as I type this!

And because I haven't put up a cake pic in a long time - here's one for you all to drool over. 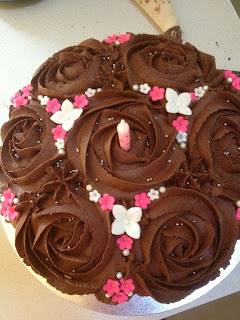