Congratulations And Pass Me the Tissues.

Once upon a time there was a little boy. This little boy liked school well enough but mostly for his friends and being able to kick a football around. The school work stuff  was just a necessary evil. One day he asked his Mum how many more years he'd have to go to school and he was horrified to learn that after he finished the seven at primary school there was still five to go at high school. When she mentioned university he was quick to announce that there was absolutely no way that he'd go there.

That little boy graduated from university for the second time on Saturday. The first was a Bachelor of Applied Science in Human Movements. The second was a Masters in Physiotherapy. 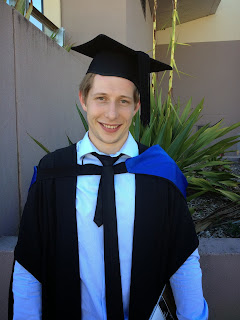 At his first graduation ceremony I was a little overwhelmed. I was so proud of him and there was very emotional music playing in the background and I got quite teary. Not to the embarrassing sobbing out loud stage - just having to bite the inside of my cheek and swallow a lot to hold it all in.

The same thing happened at Josh's graduation ceremony. He'd overcome such a lot to finish his degree and again I was a very proud mumma. And again they played that soppy music that's designed to wring a tear out of the hardest of hearts. So again I walked away with a very sore inner cheek.

I was determined to hold it all together on Saturday.

So I started the day with a 16k long run (my longest since Melbourne). Running usually mellows me out so it was a great plan. But I hadn't counted on feeling quite so tired after it (a combination of it being the end of a long year, needing a holiday, having extra things on AND did I mention it was my longest run since Melbourne). Tired plus emotional is a recipe for disaster so my next plan was to get a nap in before the ceremony at 1pm.

It's hard to nap when you're trying to keep your hair from getting that squashed-on-one-side-sticking-up-on-the-other look. And it's also hard to nap when people are coming into the room to ask you questions. In the end I resigned myself to be happy to just put my feet up and have a snuggle with Toby for a while.

We made it to the university in good time and entered the hall to the same music that had been my undoing last time. This was where the second part of my plan came into play. Whenever I started to feel myself being swept away I was going to distract myself.

The graduands filed in. All dressed in their gown and mortar boards. All having worked so hard to achieve their goals. Oh crap, I was starting to feel those familiar tears welling and my throat swelling as I saw my boy walk in. Now was not the time to think about that little boy who'd thought that 12 years of school were way too much. Now was the time to change the soundtrack in my head to the Baby Elephant Walk followed by some circus music. It's hard to feel sad when you're expecting clowns to appear.

And as soon as the students were seated the clowns DID appear. All wearing their silly hats. Oh I know it's a solemn occasion and these are some of the most respected academic minds in the country but why are they forced to wear such silly hats? And what's with the person carrying the mace? Is it to poke people who are sniggering at the silly hats? 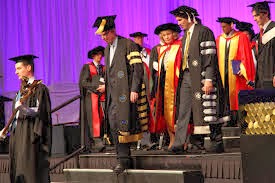 It was all over in just over an hour and then it felt like another hour before we found Sam outside in the teeming throng of students and families and friends. Time for photos.

So that's it. Two hard years of study completed. An exciting world of possibilities ahead - starting in Melbourne in just a few short weeks.

Someone pass me the tissues.