Some Days You Just Need to Run.

I went for a run this morning.

It wasn't on my program but I'm pretty sure Coach Chris will forgive me this one.

My eldest left on a road trip to start his new life in Melbourne.

I'm excited for him.

It's a big adventure. It's starting a life together with his girlfriend and they've been apart for way, way too long while she's been studying in Sydney. It's starting a new career in something he's always wanted to do and something he's worked really hard to achieve. But it means that he'll be living two states south so I'm allowed to be a little bit sad today.

So that's why I needed to run.

It needed to be challenging so I chose a hilly trail run. I figured that the pain in my legs would outweigh that little pain in my heart. Plus it's hard to cry when you need all your breath to keep you moving forward and upward. And it's hard to think about anything else when you have to concentrate on keeping your footing over the rocks.

And there's just something special about being amongst all those trees and bushes and birds that helps fill empty spaces inside and sooth bits that are aching. Even if it's just for a little while.

I stopped at the top and took a photo of the city and sent it to him so he won't forget what his home city looks like. 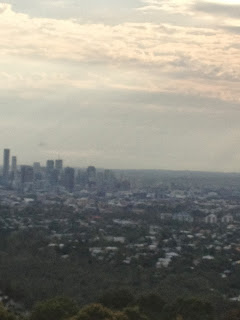 It was hot and humid and sweaty and hard. And I came home feeling so much better than I left.

I think I need to buy a puppy. I'm sure Iven won't mind. And besides, he's going to be away for the next few days and won't be able to do anything to stop me!
Posted by Char at 2:09 PM