I have done something very wrong.

I'm feeling guilty and ashamed and I'm finding it hard to write about. So I'll just show you what I've done. 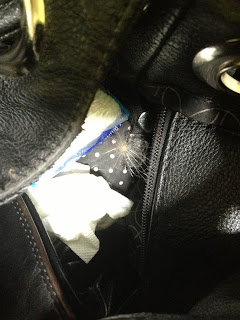 The picture is the inside of my handbag. Full of dirty tissues and receipts and movie ticket stubs. My guilt isn't over the feral state of my bag, though. It's over the thing that's nestled on my spotty umbrella.

Yes, to all intents and purposes it looks like a dandelion seed. But that's just what it wants you to think. My Grandma told me what it really was when I was a little kid. It's a Santa Claus! Or more precisely, a little spy that Santa sends out just before Christmas to see if we're being naughty or nice. And on the day it arrived I was being a little less than nice.

OK, I was being a lot less than nice. I was in the throes of PMS - irrational, moody, cranky, emotional.

Having periods is a bitch!! Or, more accurately, having periods makes me act like a bitch! I can't tell you how many drivers received a verbal tongue-lashing from the safe interior of my car. And I'm sure there were quite a few slow-walking shoppers who felt the heat of my glare as I tried to make them speed up with my telekinetic skills.


And my mood wasn't any better once I started work. Too much to do and too many interruptions! I work for myself but I was almost prepared to give myself a written warning about my poor attitude - but that would have been extra work and would have made me even crankier. Chocolate for lunch didn't help even though it tasted good going down.

And then Iven arrived home with the news that he was taking the next three days off for his birthday.

Not sure why he didn't consult my menstrual calendar when he made that decision but I quickly made him aware that it was a poor one. How dare he have time off when I'm so busy! How dare he have a birthday so close to Christmas - having to buy two lots of presents for him so close together is no easy task! How dare he ask me to make him a special meal for his birthday dinner when takeaway would have been so much easier for me! How dare his parents have unprotected sex in March way back in 1952 - they should have realised how much extra work that was going to be for me in the future. I even went so far as to declare that it should be illegal for any person to have unprotected sex any time in that March-April window. (BTW - just thinking about my in-laws and sex didn't make my pissy mood any better. It just added a whole new dimension of 'disturbed' to how I was feeling.)

He wisely left me alone with a soothing cup of tea (decaffeinated, of course) after that. Which allowed me to spend the next hour fluctuating wildly between feeling guilty for being the biggest bitch in the world to being angry at Iven because it was his birthday that was making me feel so guilty.

Gotta love raging hormones. I have a feeling that menopause is going to mimic The Hunger Games and the odds will only ever be in my favour.

It was about then that I saw the Santa Claus in my handbag. That sneaky son-of-a-red-suited-stalker had borne witness to my entire day. There was only one thing to be done if I was going to get anything apart from a piece of coal in my Santa sack. I zipped him up in a side pocket of my handbag and he'll remain there until Boxing Day. Then I'll have a whole year to make sure I'm super-nice to get back into the 'nice' column for 2014.