My Husband - The Thrill-seeker

Iven is a bit of a thrill-seeker. He likes to live dangerously, walk that tightrope between life and death.

Surprised, aren't you? I've been writing this blog since 2010 and this has never once been mentioned before, but he did something yesterday that reminded me just how much of an adrenalin-junkie he is.

He went Christmas shopping with me! Me, who occasionally has homicidal fantasies where he's the star attraction, and who was PMSing my heart out on Monday and who treats Christmas shopping as only a small step up from visiting the dentist to have wisdom teeth removed. It was a little like walking into a lion's cage with a piece of raw meat and a big stick and hoping that the kitty would play nice.

Spoiler alert - he did live to be able to go to work wearing a silly Christmas hat today as modelled below by Toby. And, yes, Iven looked just as excited as Toby did to wear that hat. 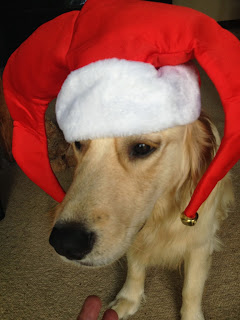 Iven may be a bit of a thrill-seeker but he isn't entirely stupid. He did a risk analysis before heading out on such a dangerous mission. He made sure that I'd had my run and I was good and tired, but not too tired that I'd be totally snarky. And he plied me with coffee to make sure there would be no withdrawal symptoms. And he promised to help with dinner - or was that a threat? Sometimes when I'm coming off a caffeine high I misinterpret motivations.

I'd had a fleeting thought one day, when Iven asked for the umpteenth time what I'd like for Christmas, that maybe a curling iron might be useful for those millions of occasions when I have to go out looking like I care about my appearance. (PS - that last sentence would have been written in Sarcastica if such a font existed.)

Iven took that thought and ran with it. Desperation will make a man do strange things - like go into the hair care section of department stores. Delusion will make him do so thinking that he'd be able to find what he was looking for easily. Devastation is how he feels when he realises that there are more than one type of electrical hair appliance and the decision is actually going to take some careful thinking. Discretion is what made him drag me back with him after the initial reconnaissance mission.

I personally didn't think it was too complicated but I didn't realise that the concept of crimping versus curling was such a difficult one to grasp - especially for a man blessed with a head-full of curls. Or three-quarters of a head-full if I'm being totally honest. And then there were the straighteners which can also be used to create curls. And hot rollers.

I could tell from the pain in his eyes that it was a baffling and confusing new world that he hadn't known existed. But he was determined to learn its language and at the end of the twenty minute lesson which only involved a few eye-rolls and one major sigh he could tell me a crimp from a curl from five metres away without his glasses on. He's my star pupil.

He chose not to buy anything then and there because he wants to surprise me. But I think he's the one who's going to be surprised when he realises why I really want it. I've been dying to play hairdresser with Toby and I'm pretty sure his tail will look magnificent in ringlets but he never leaves the rollers in long enough for me to find out. 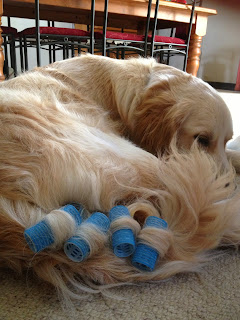 Anyone else asking for an out-of-character gift from Santa?
Posted by Char at 5:21 PM