It's all about nostalgia today.

Iven and I did manage to make it to out 28th wedding anniversary. So to celebrate I did this. Just to see if it still fit. 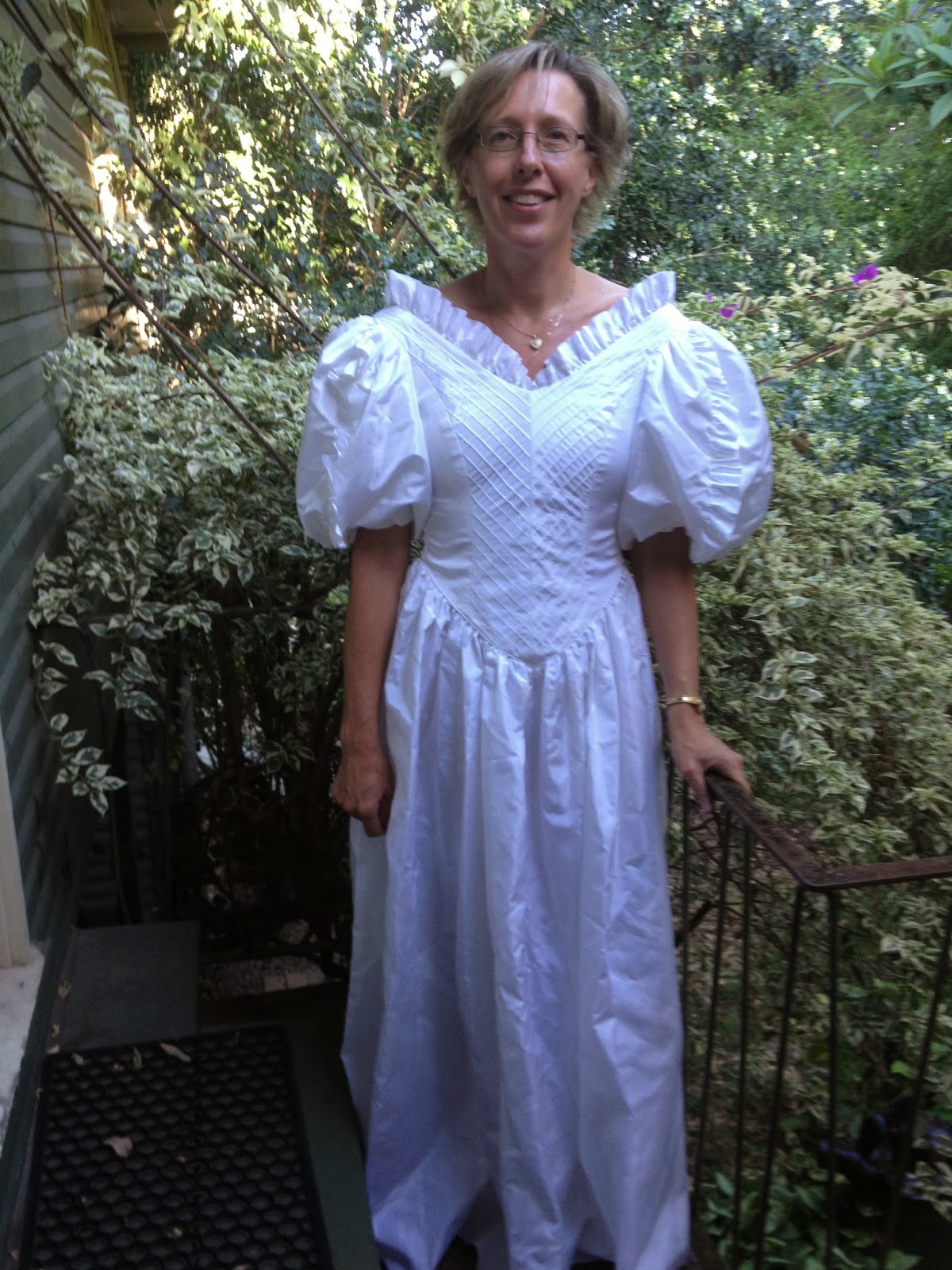 Trying it on brought back a whole lot of memories. The proposal - there wasn't really one. It was just a weird incident a short while after we'd been going out when someone asked when were going to get married and me, totally embarrassed by the question because it HAD only been a couple of months, answered 'who'd said anything about marriage?' which really upset Iven because he'd been thinking about it already, being that he was 32 and feeling a little left on the shelf or maybe he was totally smitten with this woman who wasn't scared to put her arm up a cow's backside as long as the cow was well restrained.

I remembered all the hours of ironing I had to do to pay off the dress. Back then I was just finishing uni and my income came from ironing at $5 an hour. At $250 the dress was 50 hours worth of ironing and that didn't include the alteration.

I remembered just how hot it was the day we got married. How it had rained for a lot of the morning. How we were trying to come up with contingency plans for our afternoon out door reception. But how the sun came out just in time to turn the day into a sauna. How the sweat ran down my legs during the ceremony. But how it really didn't bother me. 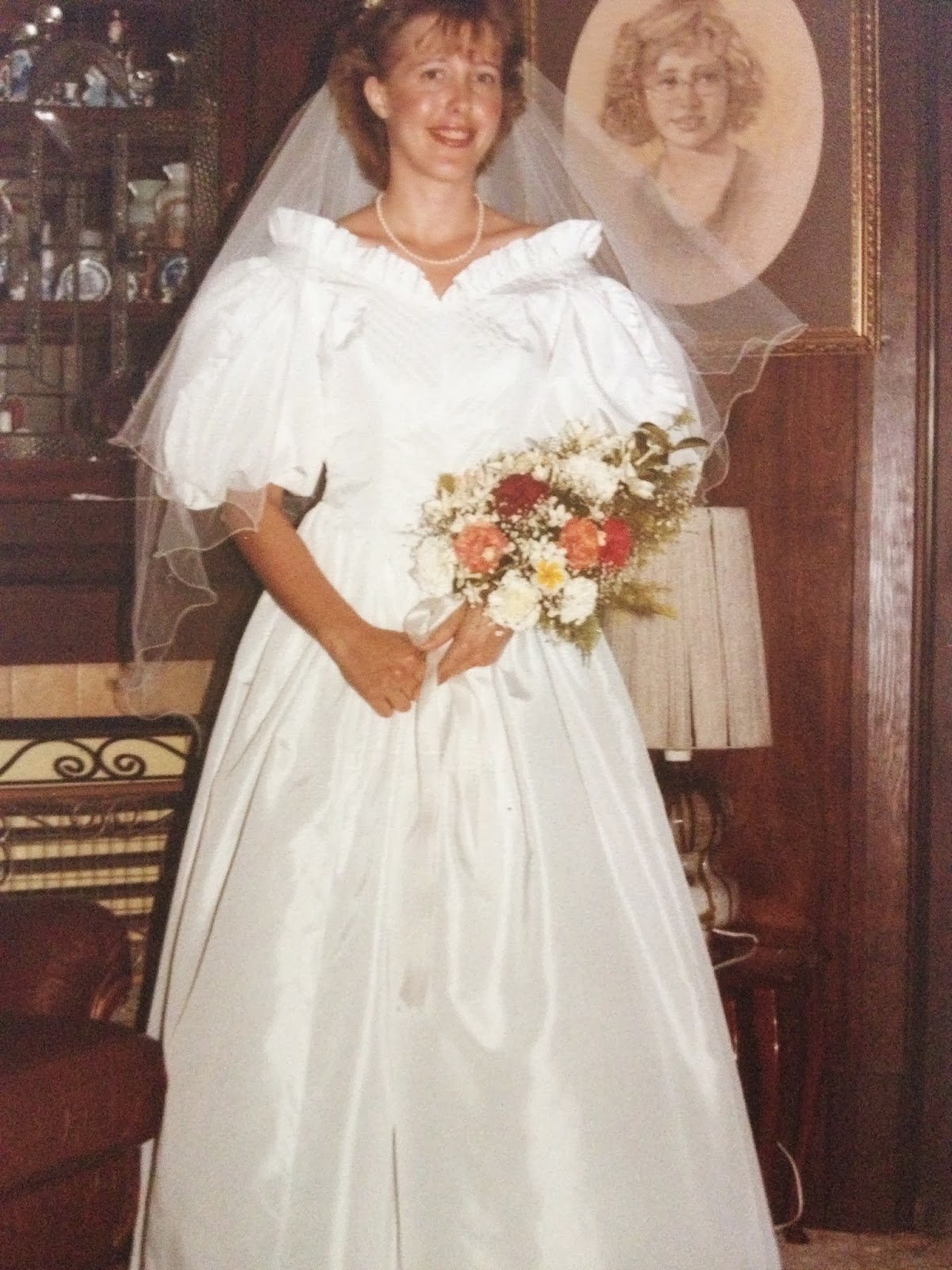 My four sisters were my bridesmaids along with Iven's niece. Somehow I'd forgotten to let them know that Iven had a slightly unusual middle name - Newbury. When Iven Newbury Donaldson was asked to take me as his wife the whole female side of the bridal party started to giggle. 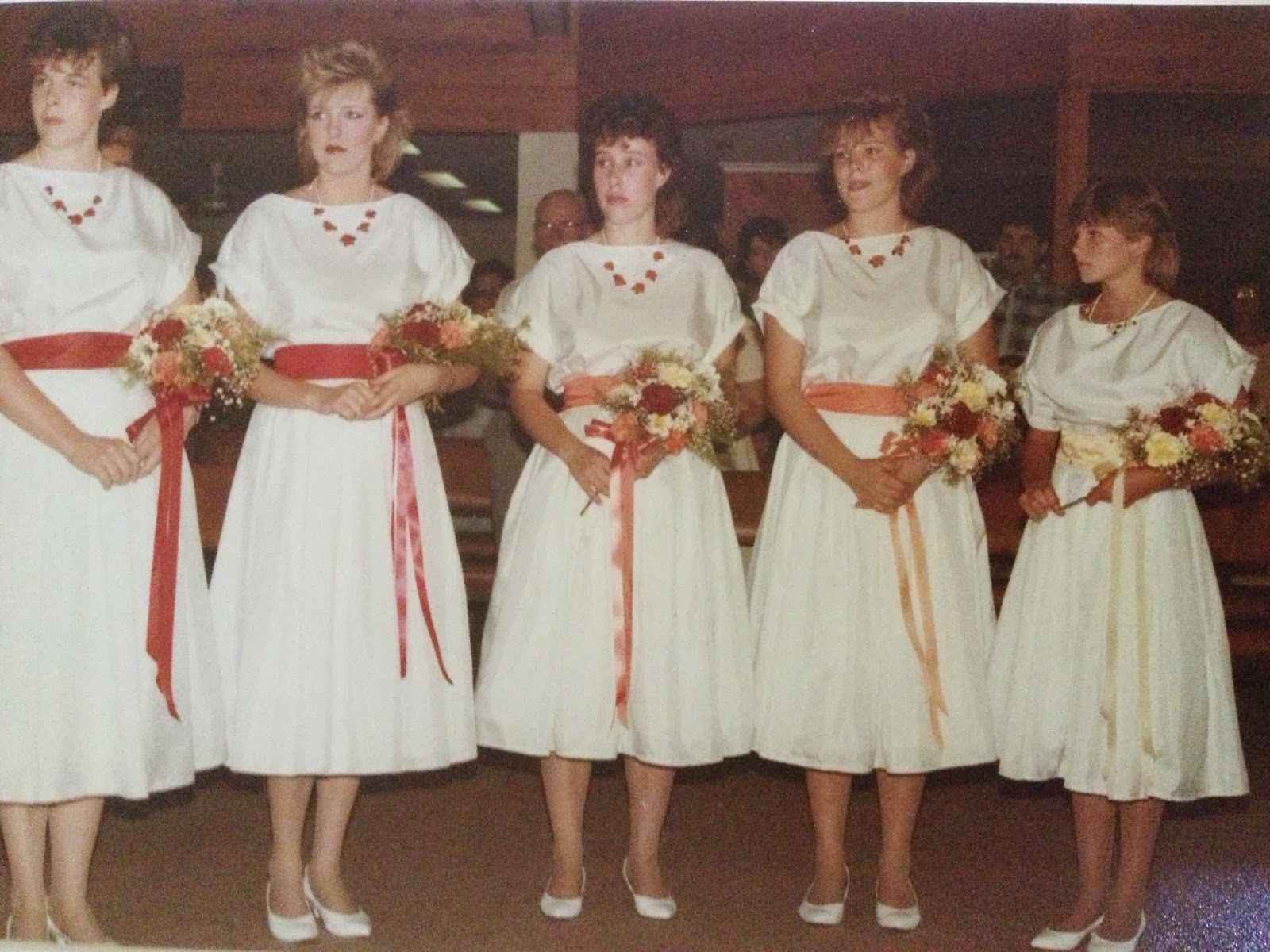 This next photo is a particular favourite. It's just so 80s. The big hair thanks to bad perms. The mullets - 'business at the front, party at the back' hair. The bouquets that the florist got totally wrong but we'd used anyway because what would we do with our hands if there wasn't a bouquet to hold. The necklaces that had been made by a family friend out of bread and glue that were just what I wanted. 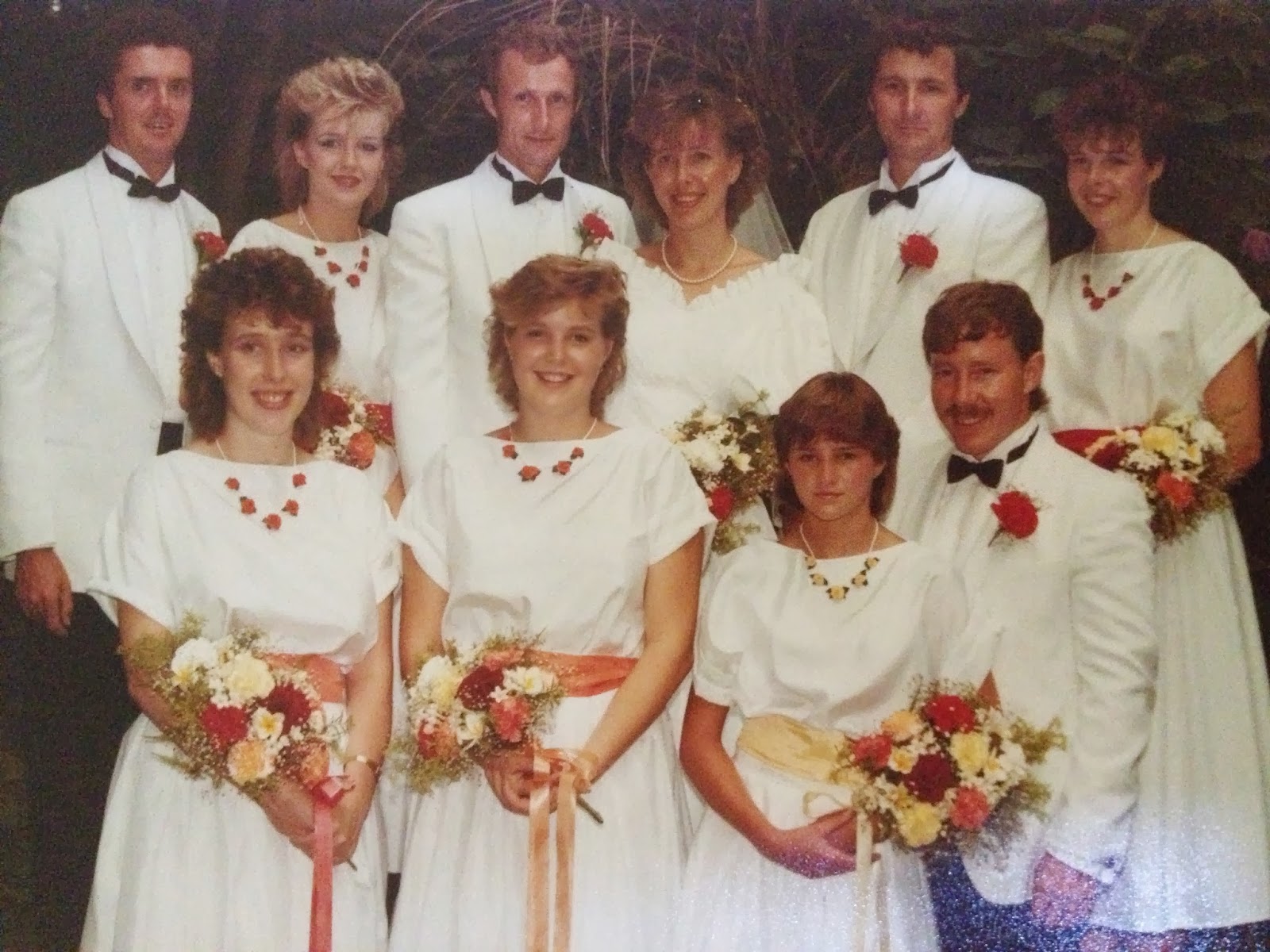 And then there was the cake. It was beautiful. Made by the pastry chef brother of my brother in law.
It was put on a table that wasn't quite level and the cake tiers were really only balancing on the little champagne flutes. 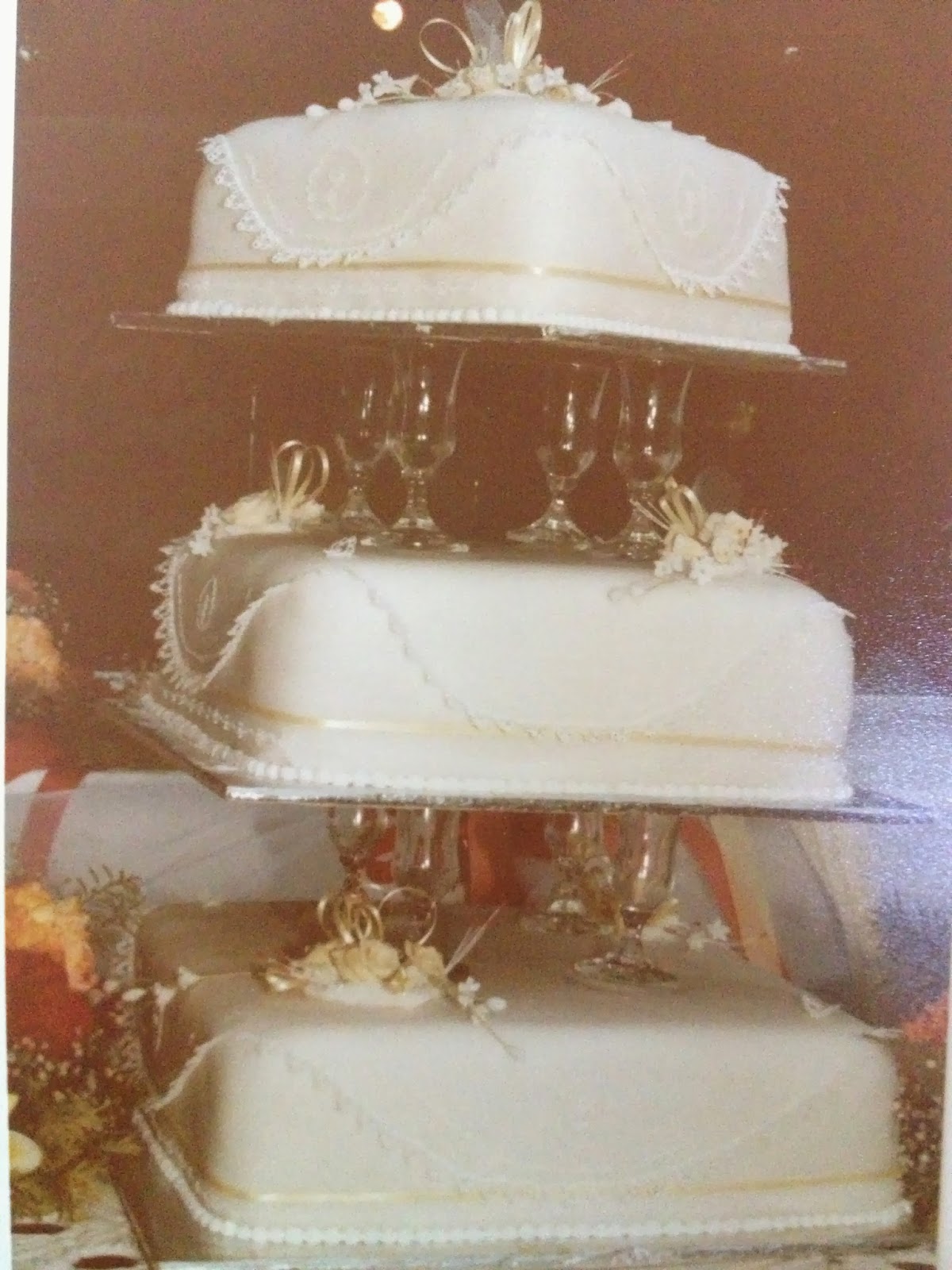 I didn't actually see when they all came tumbling down but I knew something had happened when I found myself cutting a two-tiered cake. 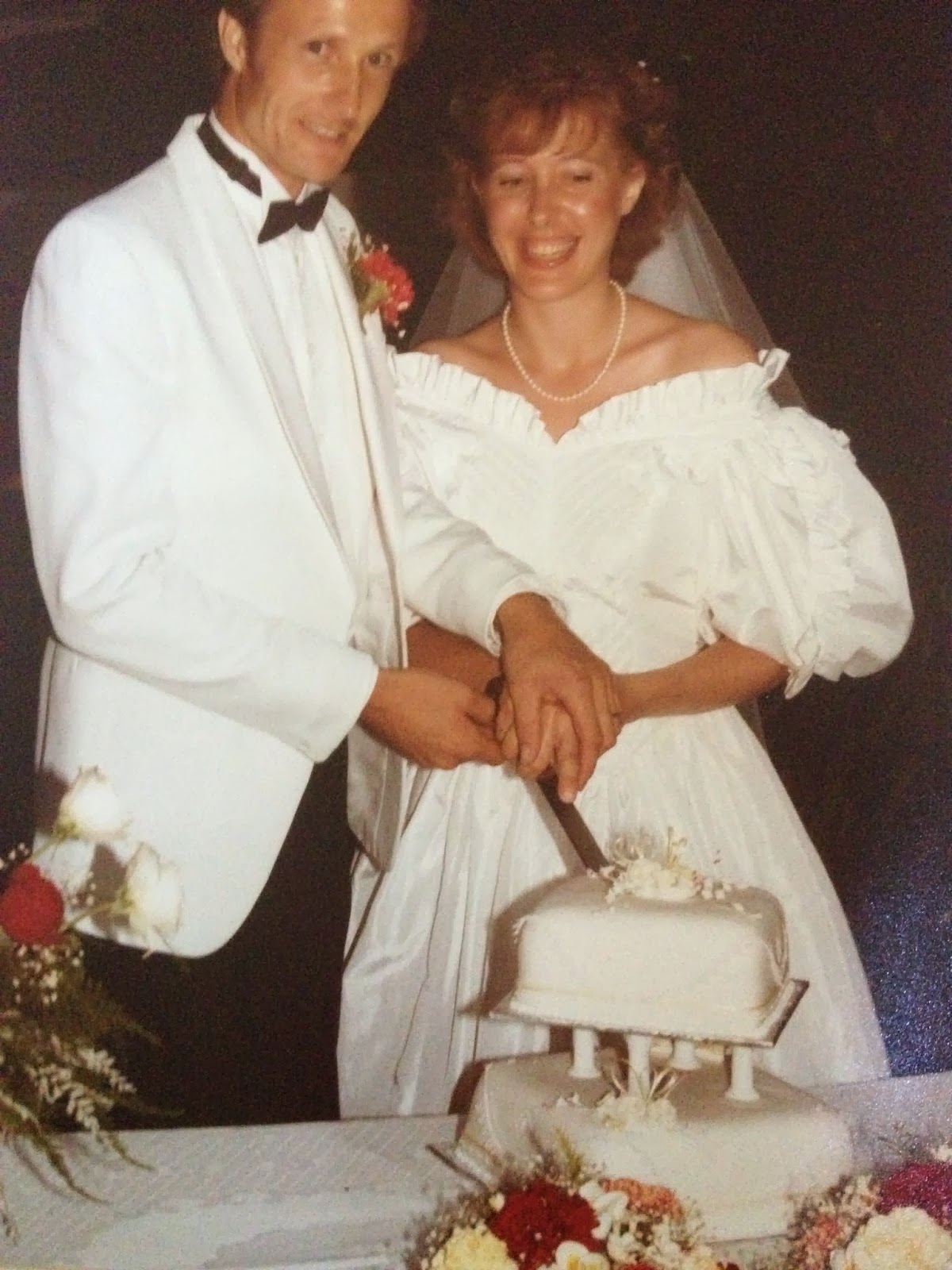 Then there were all the other memories that there are no photographs of. My Dad's wet eyes as he walked me down the aisle. My little baby niece, Nicole, in her baby capsule. My sister having to reverse the top of her outfit because it had been too long since she'd fed her baby. The smell of sardines on the breath of our old neighbour when she kissed me - certainly one way not to get forgotten. Picking embedded rice out of my skin later on when I finally could take the dress off because that stuff had gotten everywhere.

Before the day I'd been worried that I'd find it all a huge ordeal. I hated being centre of attention and it's hard not to be when you're the bride but it ended up being such a wonderful day that I really enjoyed. And it wasn't a big fancy event. A lot of what was needed was done by family and friends. But that's what made it even more special.

And if I had to do it all again, I'd probably do it the same way. But with a dress that was a little less taffeta and a lot less big sleeves and frills.
Posted by Char at 2:38 PM