It's hard to resist the cherubic face of my great-niece looking up at me with her lips puckered wanting to give me a kiss good-bye. That cute little three year old face haloed with burnt golden hair wanting to bestow the sweetest gift that a three year old can give. Impossible to resist - so I didn't. And I really should have. Especially since that cute little puckered mouth was bathed in snot. And that snot ended up on my mouth - ughh!! Effectively my sweet little great-niece was a biological weapon

Apparently snot is much more likely to give you a cold than spit. Or at least that's what my son pointed out to me as we were flying down to Melbourne and I was trying not to scream from the pain in my sinuses and ears. So last week I learnt a couple of very valuable lessons. Take a decongestant if you're stuffed up with a cold and you have to fly. And don't kiss your snotty great-niece on her snotty lips just a couple of days before you run a race.

It's just as well that I was never planning on racing the Great Ocean Road half marathon. The weekend was mostly about family - getting to see Sam and Hannah in their new natural habitat, spending some quality time with both of them and #2 son Josh. Getting to run along a beautiful stretch of coastline was just an added bonus. 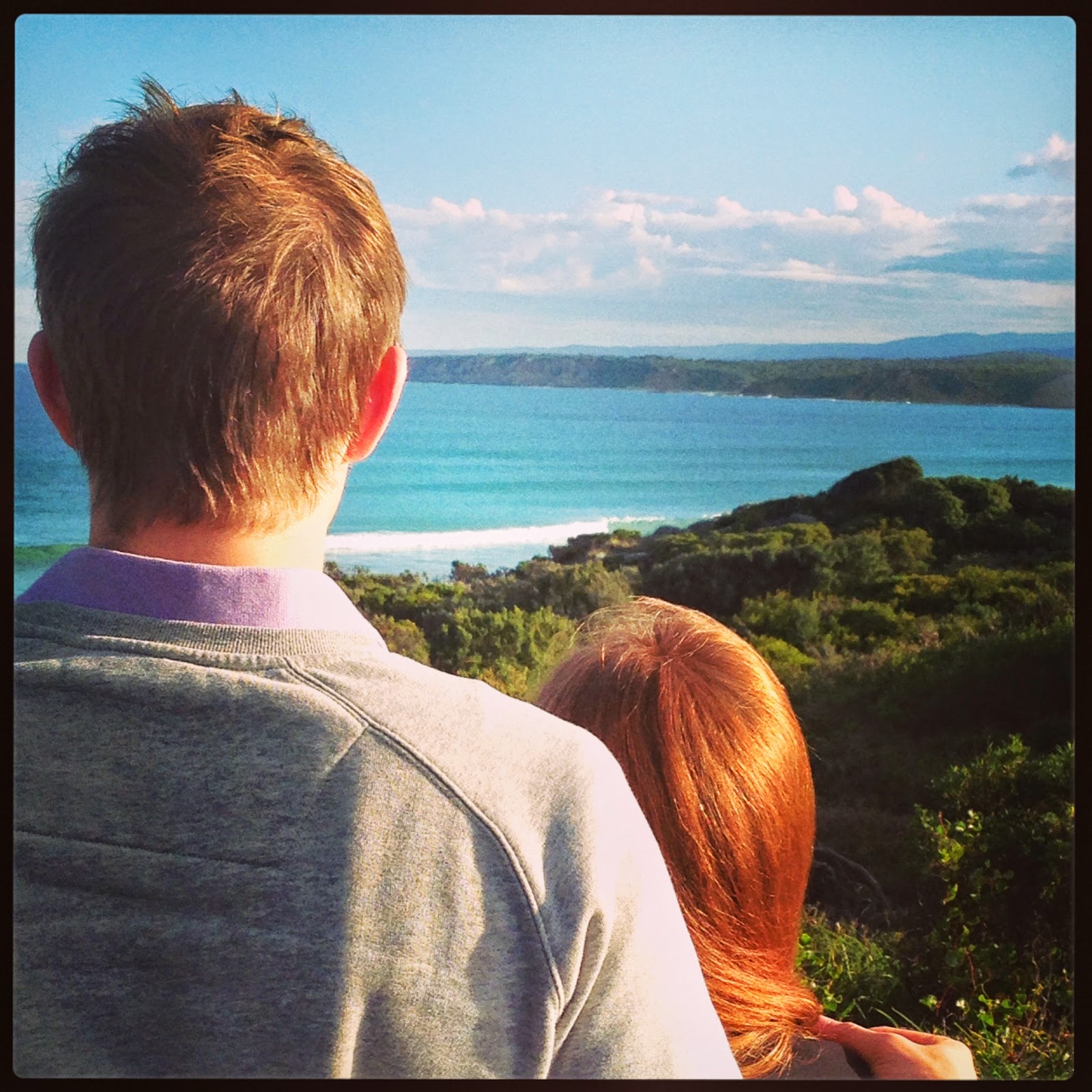 We drove down to Apollo Bay on Saturday afternoon, checked into our accommodation and tried to get a good night's sleep. Sleep is always a little elusive the night before a race - even if it's more a run than a race. But we made it to the start line fairly rested - and, my personal little victory, unmedicated. I was actually fairly un-stressed about the run. Or maybe it was more that my head cold was a good distraction.

There was plenty of time once we were dropped off to do important things. Like take selfies. And find your team-mates (or more accurately - stand in a fairly open place so your team-mates have a chance to find you). And then find willing strangers to take more photos. 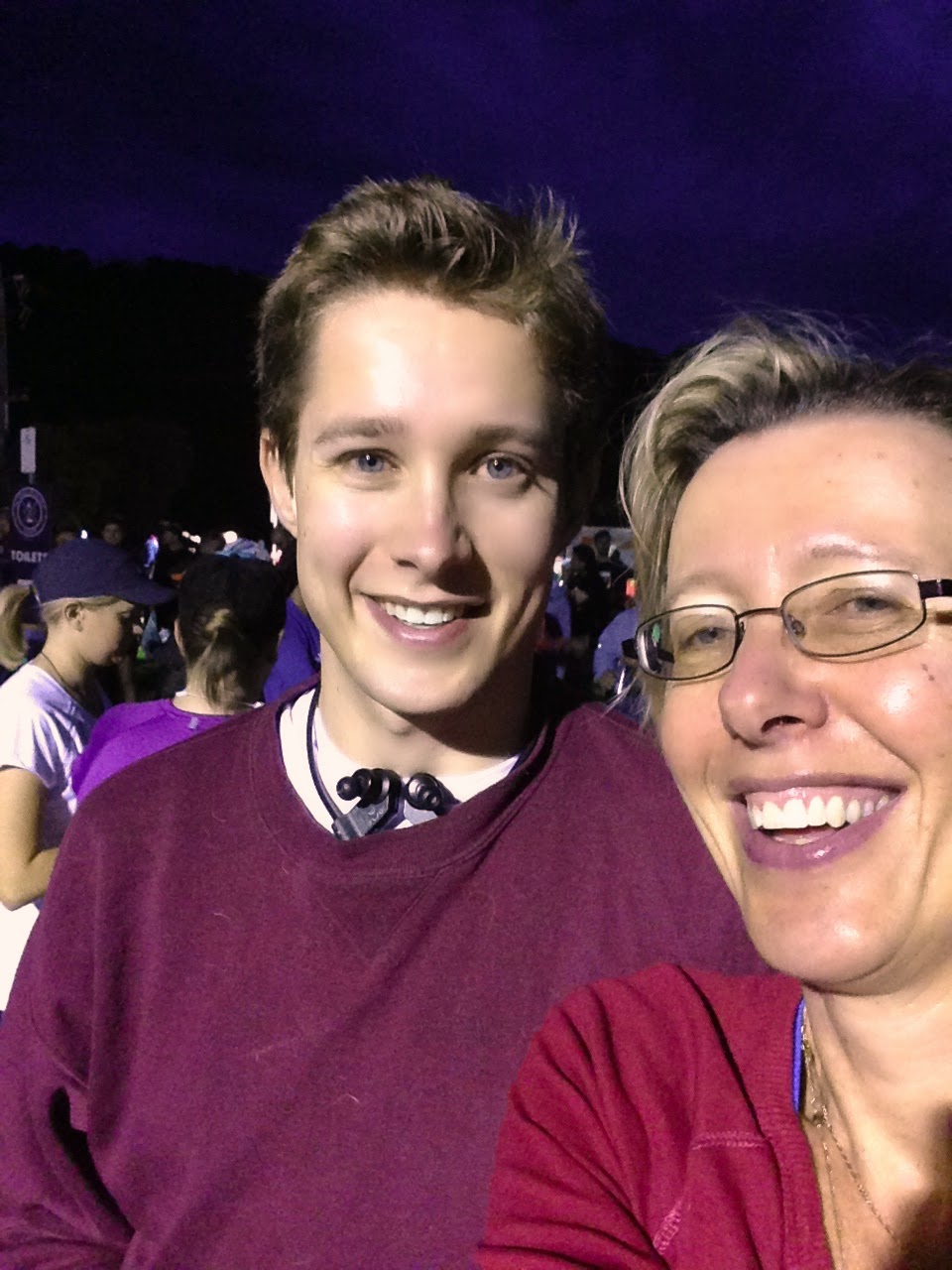 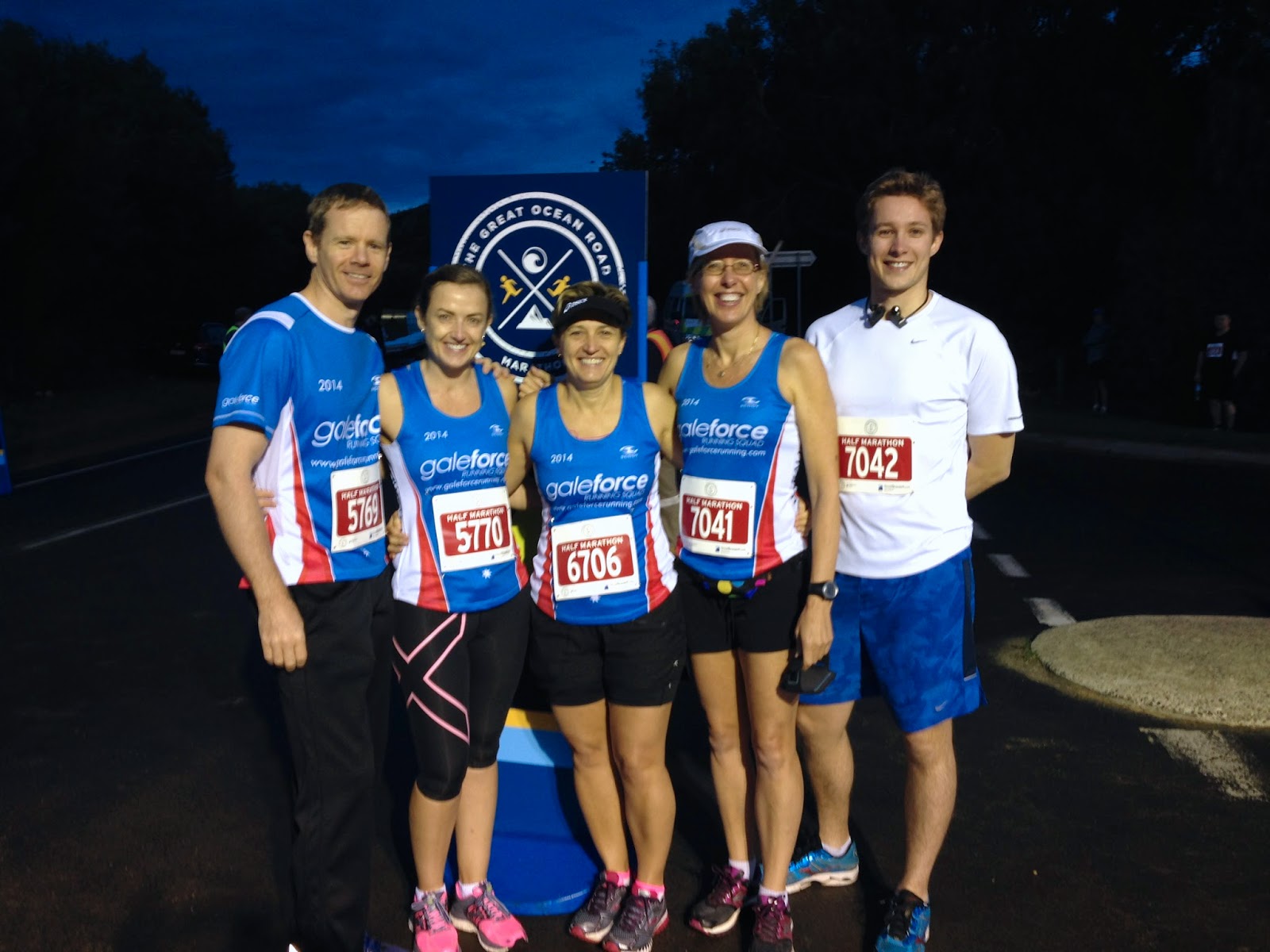 The race finally started about five minutes late and it was straight up a hill that was still going up when my watch beeped at the kilometre mark. There was a lot of people to run through so we'd either started too far back of they'd started too far forward. By the second kilometre the traffic had eased enough so  I could run at my own pace but I just didn't feel great. The pace was okay but it just felt harder than it should have. I put it down to the hills and just kept running hoping that I'd start to feel better soon.

The scenery really was spectacular - thank goodness that there was something to take my mind off the pain my body was in. I'd eased back on the pace but I still was struggling. I kept doing the maths - how much further did I have to run? That's not good when you're only around halfway through the race. My legs were heavy and the cold was taking its toll - I had nothing in the tank. 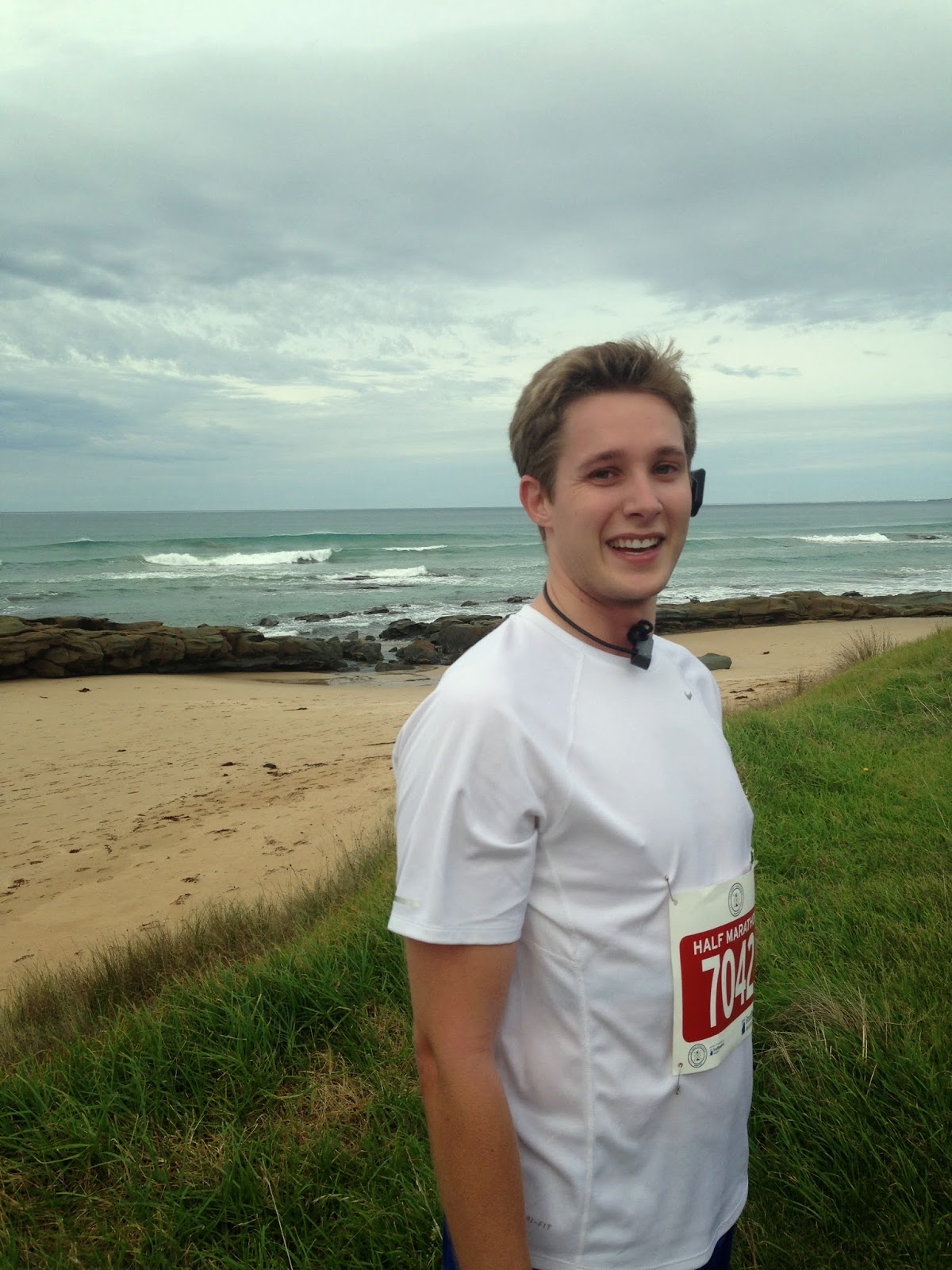 By around kilometre 17 I ran back into Josh. He'd been a bit ahead of me and I thought I'd see him next when I crossed the finish line but he was struggling with a sore leg and it was at that point that we made a pact to finish the race together. That's when the race became fun again. It didn't matter about time (even though time didn't ever really matter) and it didn't matter if we had to walk. What mattered was that we went across the line hand in hand and got a good photo.

So for the next 6 kilometres we took walk breaks when Josh didn't think he could run any more and ran when the pain eased back. I was a little surprised about a couple of insensitive runners who passed comments as they ran past us. "Look at the stragglers!" and "Don't give up - only two kilometres to go". We were hardly stragglers because we still finished in the top half of the field and neither did we give up - walking is still moving forward (BTW we passed that runner before the end and didn't say a word when we passed.)

Then, finally, we could see the finishing arch. Josh put on a bit of a spurt and I had to almost sprint to keep up. I had to remind him of our pact - and I had to do it loudly. So we're running down the last few hundred metres and basically I'm yelling 'wait for Mummy, pet!' - there's a first time for everything in running. 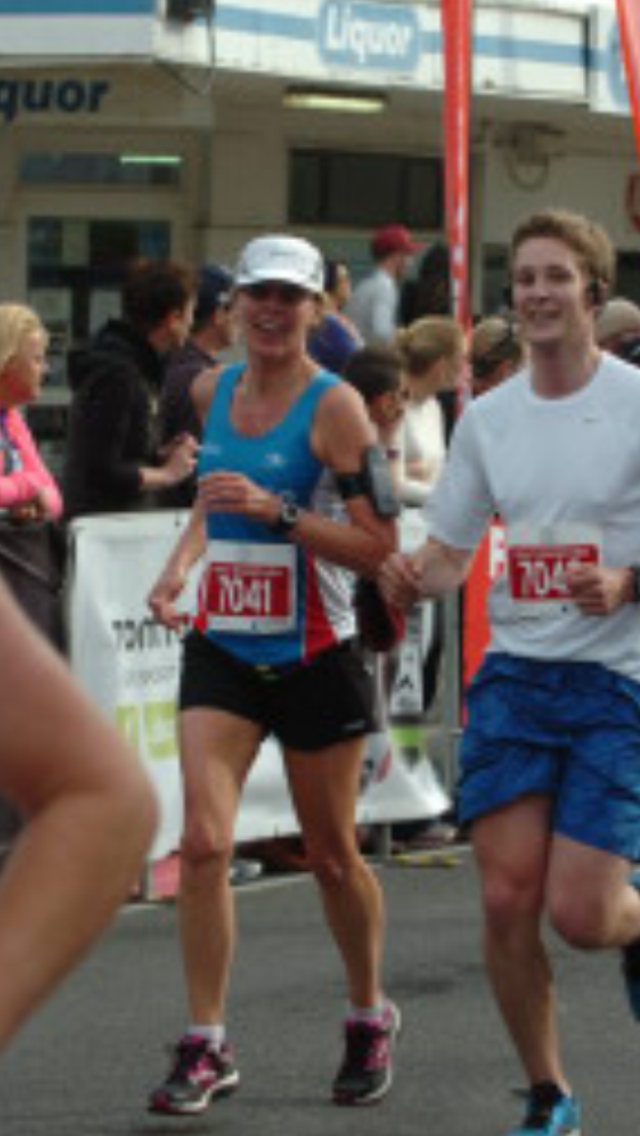 We got just in front of the finishing line, held hands and lifted them aloft. And the photographer missed us. So we tried it again and he missed again - and we'd run out of course. Ah well, in our heads it was a great shot. A triumphant family photo to treasure. 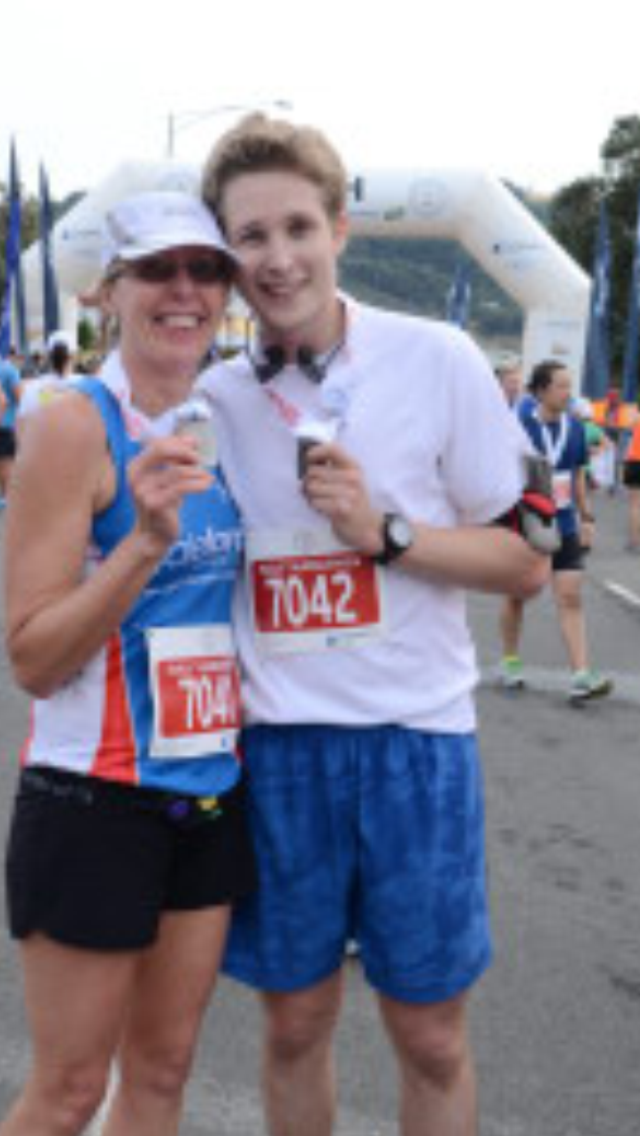 We caught back up with Sam and Hannah, had a quick bite to eat and then it was back to the car. We had other plans for the day.

You can't really go to the Great Ocean Road without visiting the 12 Apostles. Especially now that they are starting to diminish in number. It was about a ninety minute drive from Apollo Bay but it was worth it to see this. 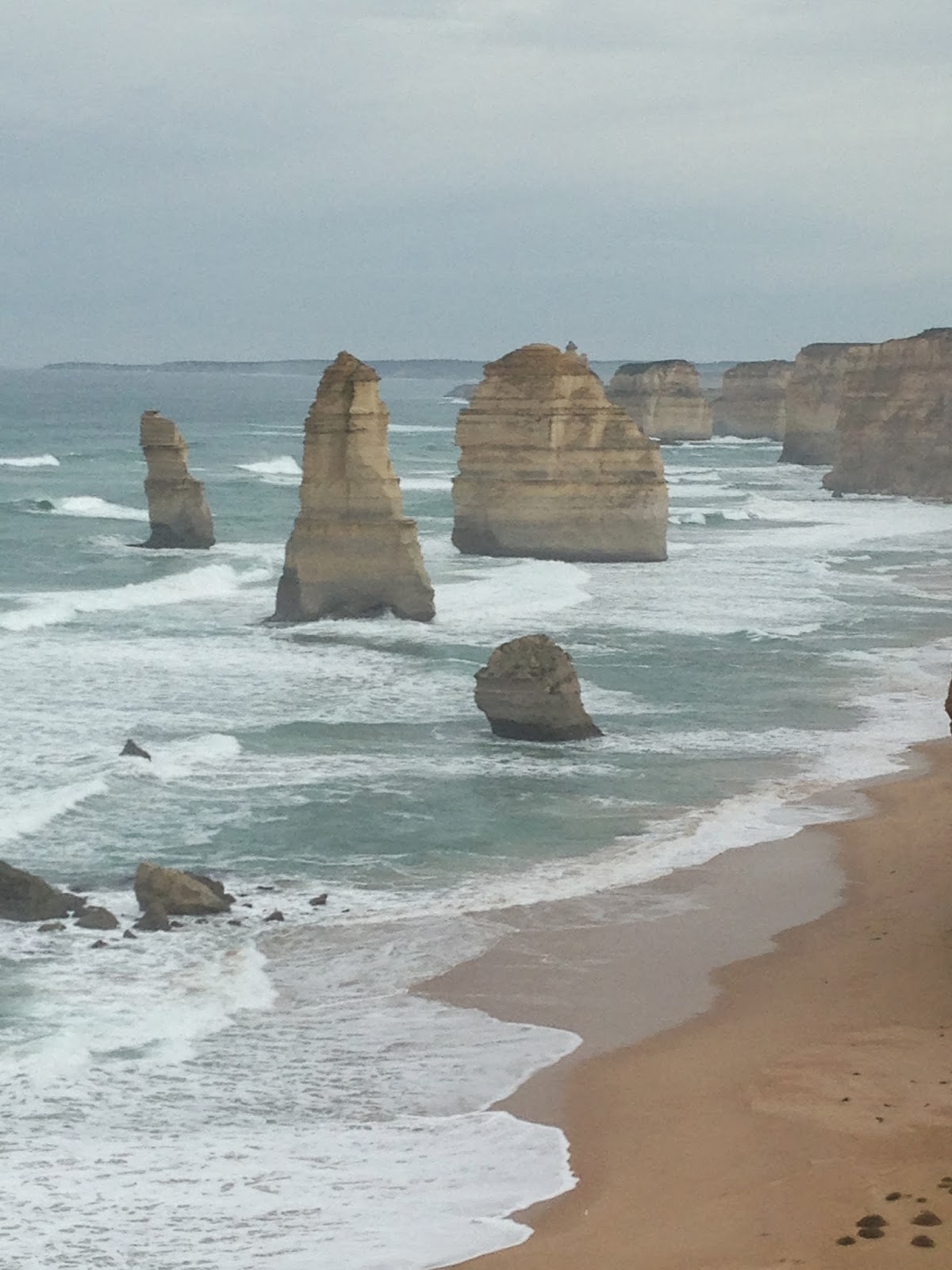 And to get a great mother-son shot. Yes, it hurt (especially after being in a car for ninety minutes) and no, I didn't wet myself. 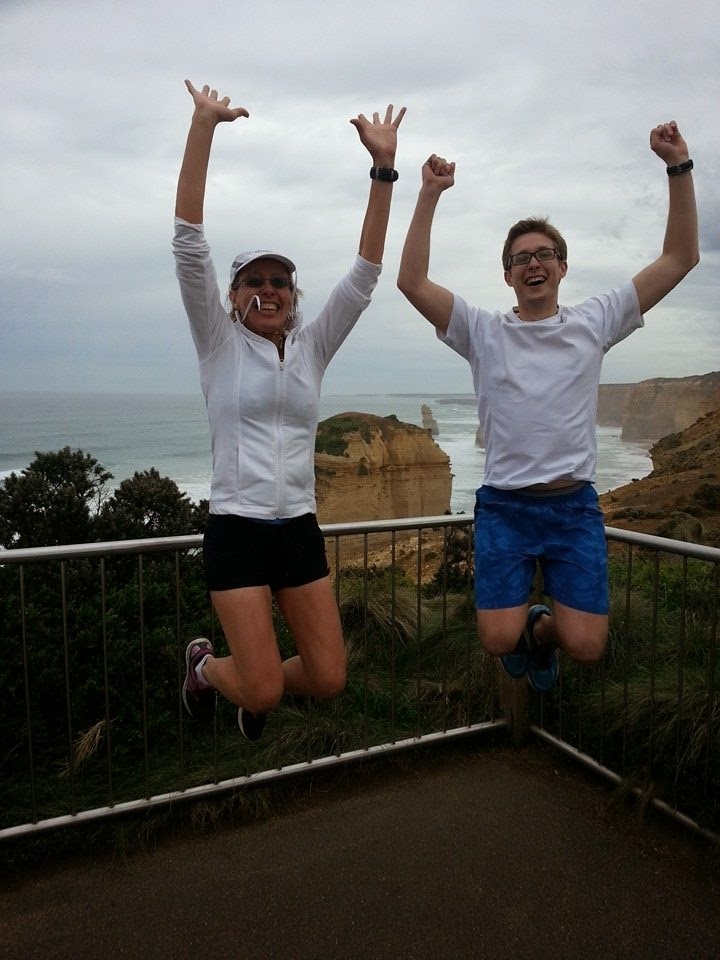 So my final word on the race - it was a good one and I'd definitely recommend to put it on your to-do list. It was well-organised on a scenic route in a great location. It might not have been my best race ever but that can't happen every time.
Posted by Char at 3:09 PM