One of my regular coffee chops has just started offering lactose-free milk. 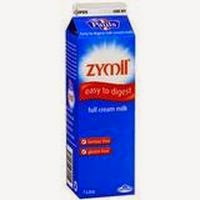 I say 'one' because I have a few that I deign with my presence. They are all cafes that are pretty consistent with what they hand over - hot, strong, not bitter and preferably with staff that know my order without me having to say a word.

I've been a soy drinker for a few years now. Ever since I realised that the stomach pains I was getting every afternoon were related to the cappuccino I was drinking every morning. I wasn't happy to have to make the swap but the lack of pain made it worthwhile. And I got used to the flavour pretty quickly. So now my coffee order just rolls off my tongue without it ever having to be processed by my brain - on the odd days that I have to actually utter it.

Seeing the sign which pronounced the offering of lactose-free milk presented me with a dilemma. Do I stick to my new tradition and just do the same-old-same-old? Or do I venture forth into a brave new world and try something new? Being that it was a public holiday (Happy Birthday Queen Elizabeth II) and I was feeling footloose and fancy-free and just slightly reckless, I decided that I'd throw caution to the wind and try something new and daring.

"Could I have a tall cappuccino on lactose-free milk?"

I forgot to order an extra shot of coffee but luckily the girl behind the counter recognised me. Or could sense my need of the extra caffeine. She charged me the usual astronomical amount that I'm happy to pay because daily coffee, books, running shoes and now running bras it seems are not wants but needs in my existence.

Then I waited on the other end of the counter for my order to be called out.

I felt every eye in the shop turn my way as I went to collect the coffee. And I felt a judgement that I'd never felt before when ordering soy.

I slunk away from the shop feeling just a little bit of shame. And then I tasted the coffee. It really wasn't that great. But at least I know that it won't have any deleterious effects. And I know that next time I'll be ordering soy again so I can leave the judgemental cafe set wondering which category of soy-drinkers I belong to.