Have you ever tried to relive your youth? And did you expect that nothing would have changed because even though three decades (or more) may have passed and you may have grey hairs, creaky joints and a few lines on you face, you basically still feel about fifteen?

I did exactly that on Saturday. Yes, call me delusional, but I fully expected my visit to the Ekka to be just like it used to be back when I was 15 - except this time I'd have more disposable income than the $5 pocket money that I used to save for the months leading up to August. 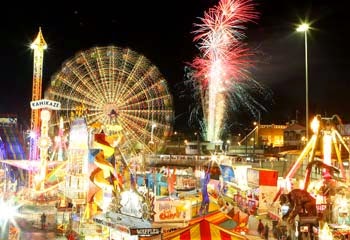 For all you non-Brisbanites, the Ekka is our local show. When the country comes to the city and we're encouraged to spend ridiculous amounts of money in the name of having a good time. 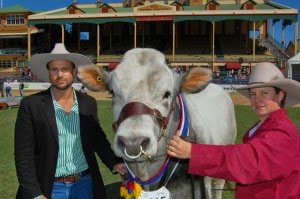 I used to love going to the Ekka when I was younger. The rides. The fairy floss. The show bags. The redolent aroma of manure mixed with hay. Scratching pig bums until they almost collapsed in ecstasy. Watching the butchers make sausages - probably out of the same pigs that had had their bums scratched last year. And collecting as many freebies as we could carry.

It was all fun and exciting - especially the rides. For me, the scarier the better. If it tossed me around and turned my stomach inside out I was in heaven. I loved the rush of being terrified but knowing that I was safe.

I hadn't been for about 15 years and every year I would have a hankering to go but then talk myself out of it. But this year Iven was out of town and Luke and Becky were house-sitting and Serena was working at the Ekka so Josh and I were at a loose end on Saturday afternoon. He took pity on his bored mother and agreed to a mother-and-son expedition to the Exhibition.

When we arrived our first port of call was to visit Serena who's working selling ice cream for the duration of the show. And my Snicker's ice cream was even better because I was having dessert before dinner. You can do that when you're an adult pretending to relive your youth.

Then we followed it with the main course - a potato tornado. Basically a spiral potato on a stick, battered and fried. I had run 29k in the morning and had a case of extreme food entitlement. All healthy eating bets are off when you go to the Ekka for the first time in fifteen years and you've burned a few thousand calories that morning. 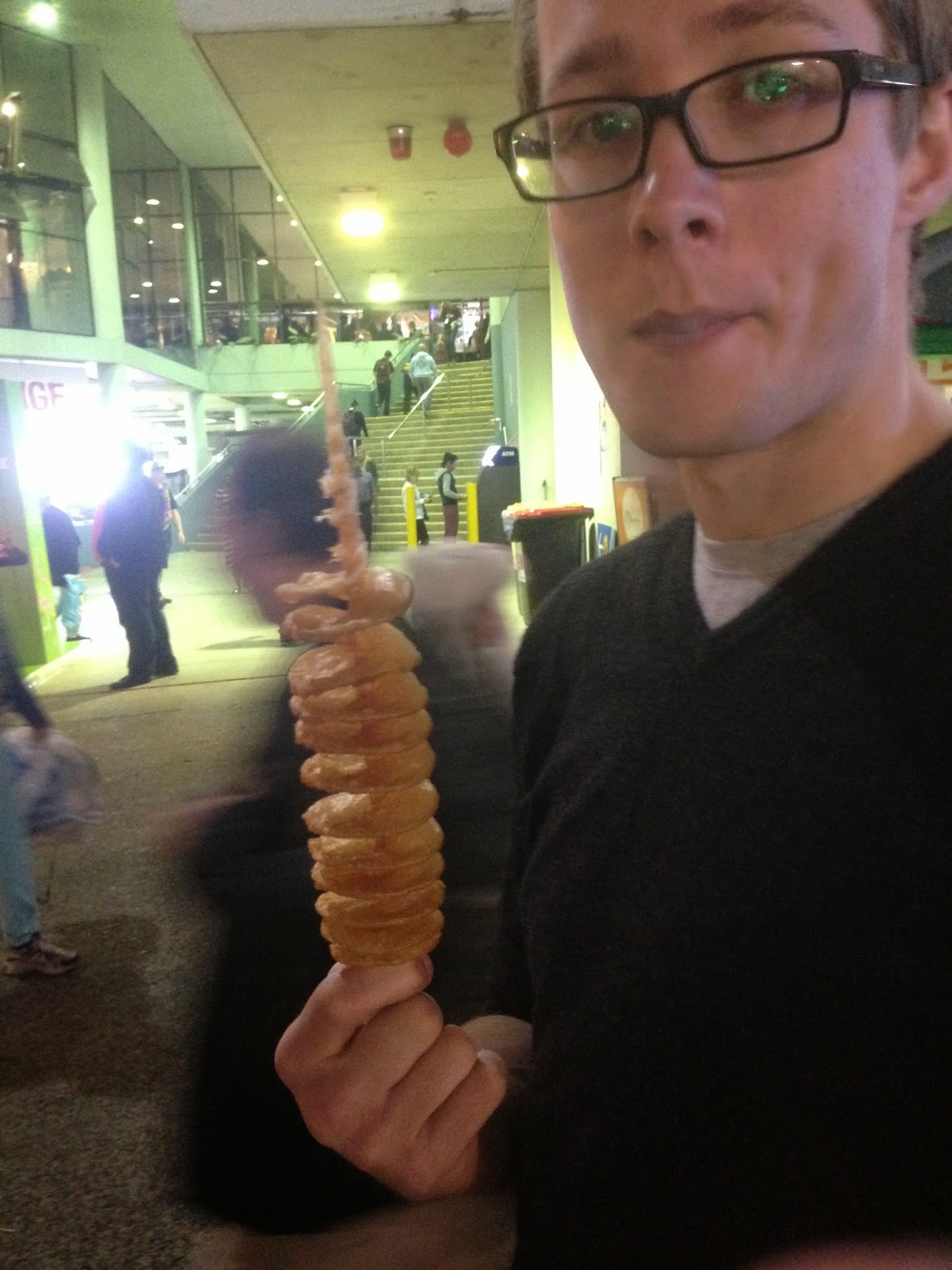 And then we made a rash and foolish decision that only the young and young-at-heart would ever make. We decided to go to Sideshow Alley to have a ride on something wild and terrifying. Because I love wild and terrifying when it comes to rides. And because I'm a pretty cool Mum even at 51.

Josh chose this one. 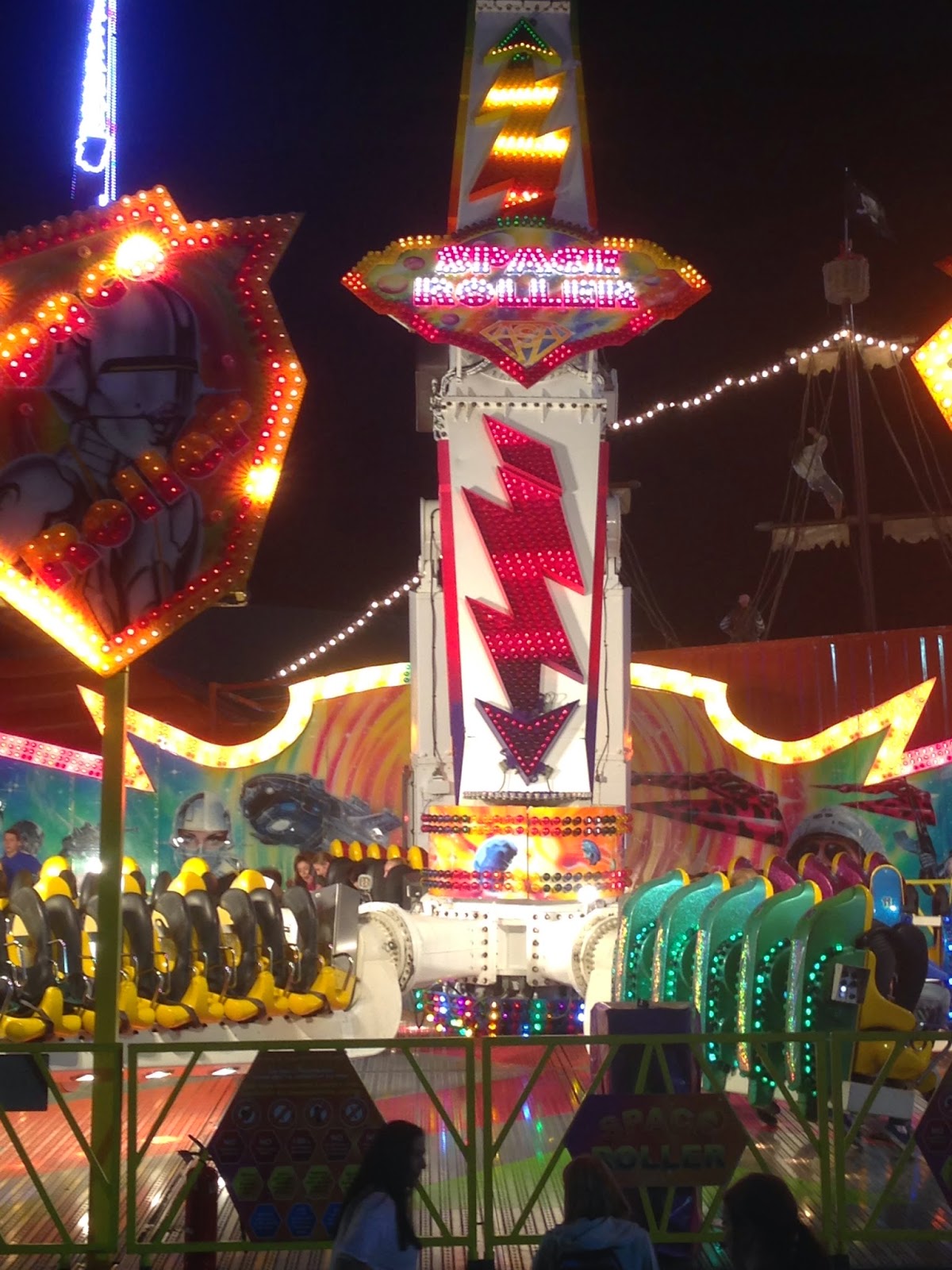 We bought our tickets and stood in queue and soon it was our turn to be buckled in. I tucked my glasses down my bra so they didn't go flying off never to be seen again and leaving me unable to drive home, then we were off.

It started off slowly. Just a few rotations. A little bit of tilting. Lulling us into a false sense of security. Then the lights started flashing and the music amped up and it was on. We were flipping and spinning and laughing and shrieking. Well, I was shrieking and Josh was laughing. And it was fun and I was fifteen again. And it didn't matter that I was the oldest on the ride by two and a half decades (yes, Josh was the second oldest). I still had it!

The ride slowed down and I was simultaneously disappointed and relieved. Relieved that I'd survived and disappointed that it was over so soon.

I needn't have been disappointed cause it wasn't over yet.

No, we were slowing down just so we could change direction. Because it's even more fun to do the flips and spins backwards.

Years ago I read somewhere that as you get older you're more prone to fall victim to motion sickness. Especially going backwards. I have now proven that fact to be true.

Not long after we started going backwards I realised that there was a good reason that my mother had warned me not to go on wild rides after eating all those years ago. That deep-fried potato floating on a raft of Snicker's ice cream didn't feel so good any more. I had a Phil Dunphy flashback.

All the fun had gone out of the ride and all I could do was focus on keeping what was in my stomach IN my stomach. There was a lot of swallowing. And a bit of praying that it would all end soon. I did not want to be the old lady who started an epic chain-reaction.
When the ride started to slow again, I was probably the happiest person on board. I was off as soon as they unbuckled me. I needed to walk to settle what was still sloshing around in my stomach. And I needed to find the nearest loos just in case the walking didn't work.

The walking didn't work. And I did find the loos in time. And I tried to throw up as quietly as possible. And then I felt better for a little while. Until I didn't any more.

The second toilet visit was even more spectacular. And though I thought I'd managed to keep my vomiting to myself I knew I'd failed when I heard voices from the next cubical.

I think it'll be a while till I visit the Ekka again. And I'm pretty sure my wild-ride days are over.