A Kind Of Public Apology - Sort Of

It was a fight that we had to have.

It had been brewing for two weeks. Well actually there'd been a mini-version of it two weeks beforehand when I found out by sheer accident that #1 husband was going away to visit his mother for ten days.

Can I just say at this point that I'm not a heinous witch who doesn't allow her husband to visit his 94 year old mother? I actively encourage it. I know that every visit at this stage of her life could be the last. Plus I get the house to myself - and whichever kids and girlfriends and dogs happen to be there too and there were the full contingent so I didn't have anything to myself except the remote control.

My annoyance was that he hadn't told me he was going to be away for so long. Usually he can only stand it down there for three days. Four max. So ten days came at me from left field.

Ten days meant having to wake up early on my non-running sleep in days to let the wolf pack out because they've been trained by my dearly beloved that 4:00am is an acceptable wake-up time. Ten days meant putting the bins out - twice! Ten days meant trying to fit in a daily walk with the wolf pack on top of everything else that I'm trying to do. Ten days was clearly not satisfactory particularly with such little notice that I barely would have time to wrap my head around it before having to pretend to be bereft as he drove up the street.

He swore that he'd told me. I swore that he didn't and that that conversation had only happened in his head. And because I'm 10 years younger (much further from senility) and I run and produce new brain cells at a prodigious rate as evidenced by my ability to remember an entire shopping list without prompts, then I was clearly right.

The ten days passed way too quickly in my opinion. I hadn't finished the second season of Great British Bake-Off before it was time for Iven to return home. Yes, I was tired from those early morning starts on my rest days but the wolf pack and I had reached an agreement that if I got up at 4:00 to let them out to wee then they'd leave me in peace to get a couple more hours of sleep. And they weren't even complaining about lack of walks which were banned after they'd dragged me across the oval after a black poodle and only my diligence in attending speed sessions had kept me from face planting. We'd compromised on indoor fun - like baking. 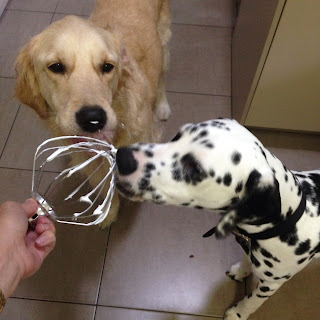 He arrived home late afternoon and I did the solicitous wife thing - shut down shop and went upstairs to spend quality time. Over a cup of tea (get your minds out of the gutter). I bombarded him with questions. How was his Mum? Good. How was his sister? Good. How was the drive? Good. And then proceeded to tell him what had happened in his absence. I was right in the middle of an important story - not sure what story it was but it had to have been important coming from his wife that he'd barely spoken to in the best part of a fortnight - when I noticed that he was no longer listening. I'd made the rookie's error of leaving the newspaper out on the table we were sitting at. So we had that interchange that happens in every household.

'You're not listening to me.'

'Well what was the last thing I said?'

No more needs to be said other than he failed the recitation test big time and now knows that the newspaper must be out of sight and the television must be off next time we're having a deep and meaningful.

I was relating this to my running companion, who just happens to be male, a few days later as a cautionary tale. To enlighten him about the mysterious ways of women - which we ourselves are often at a loss to understand. And it was I who came away from the conversation enlightened.

'Do you know how hard it is to be a man? You ask questions like how does this look and want an opinion and we have to go through all the answer options in our heads and hopefully pick the right one. It never is!' (Disclaimer - this is not word-for-word because I can't remember verbatim and would have clearly failed my own 'what was the last thing I said' challenge. But the gist is there.) I also was informed that women worry too much about the small stuff and we talk. A lot.

I walked away from the run with a lot better understanding of the tightrope that men have to walk daily. And that sometimes I'm a little less than reasonable. And by that I mean that Iven will be damned no matter what he does if I'm feeling hormonal enough.

So I guess I'm sorry for tearing up the newspaper.