I just couldn't find my belt anywhere this morning. I know where I usually put it (hanging over the mirror) and it wasn't there. Id it wasn't on the floor either. Or draped over the fan. Or neatly put away in the wardrobe like it should always be but never is. It had just gone missing. And that wasn't good because I was going to wear the shorts that need a belt to prevent public shame.

Iven, on the other hand had had no problem finding his belt. He just took it out of the dirty shorts that had been cast off yesterday and transferred it to the clean pair he was wearing. He too needed a belt. He's lost so much weight this year (about 6 kg) by exercising more and eating less that none of his shorts stay up without help.

I'm pretty proud of my husband. He's had a few health issues in the past and was on the verge of potential back surgery a couple of years ago. But this year he's really turned things around. He's been ultra-diligent with his strength exercises, taken up riding to work and back, walking the wolf pack every day and has also started running parkrun every week. He's doing as much as he can to stay active and healthy and that's good reason to be proud. 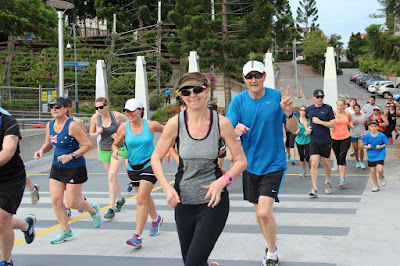 I watched him thread the belt through the stays and buckle it up. Funny, though, that he could lose so much weight and be only able to buckle to the second last hole. I would have thought he'd have been a lot more holes in. And funny how that belt looked suspiciously like the one I was looking for.

I made him take it off because I am not naturally trusting by nature. He might swear he got it out of his wardrobe but my suspicions told me otherwise. And yes, my svelte husband had been wearing my belt for over a week.

I'm not happy about this turn of events. Not the actual wearing of the belt but the fact that he can wear the same sized belt as me. That's just not right. My role in the scheme of things is to be smaller than him and I don't want to have to be forced into dieting just to maintain my that role.

Another thing that's just not right is my youngest son's reaction to my latest Instagram photo.

I got some new fabric for Run Amok tights and had make up a pair to put through some rigorous tests. And by rigorous tests I mean a 24k run in equatorial weather conditions. They held up really well - no chaffing, no rubbing, no riding up (not that that was really going to be a problem when the sweat holds them in place) and no riding down. 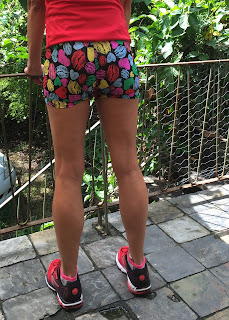 I wanted to show off the cute print on my business Instagram page so I got Iven to take a pic. Only to be asked why the gratuitous butt shot. Not what I was trying to achieve. In my mind it was all about the fabric.

Now I'm left with the quandary. Do I take photos with them on or lying out flat on a table? Is it not appropriate to be photographing one's own backside for the purpose of advertising? Will it scare off customers or will my courage in putting it out there encourage others to give tights a go? Or should I just disregard the remarks because they came from one of my offspring who probably still gets embarrassed by the actions of his mother?

Man, businessing can be hard!