Messages From On High 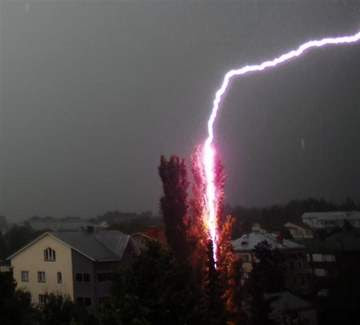 It's only three days till the big day for Lucy and Brad. The clock's ticking and final preparations are underway. I've finally solved the problem of The Cupcake Icing vs The Weather. We're ditching the buttercream in favour of Italian Meringue. There's a little more work involved but the white is whiter and it has a better hold for the hearts. Phew!

This is Lucy's second marriage. And Brad's. And we're all hoping that it's a much better fit for both of them than their first partners. My Mum, who could win a gold medal for worrying, has been praying hard that it'll be right. Today in her prayers she asked God for a sign to put her mind at rest. Unfortunately while she was praying a really big thunderstorm was on the way. Lots of thunder and lightening! And, would you believe it, a bolt of lightening hit the roof of her house and sparked a little fire. The first Mum knew of it was her dogs going insane, barking at the firemen.

Poor Mum's now hoping that the lightening bolt wasn't a rather strongly worded message.
Posted by Char at 10:39 PM