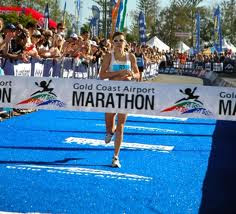 Race day tomorrow!! I'm waylaying running nerves by baking. And carb-loading (yep, I'm only doing a 10k and don't need to carb-load) by tasting. Even Nelson (dalmatian) is carb-loading by licking the cooking bowls.

I've sort-of started packing by putting stuff that I think I'll need on my bed.I've got my race number and my chip and my Garmin. No clothes yet. I guess they're sort-of important especially if I don't want to race naked - and I don't want to do that because I'd have trouble deciding where to pin the number.

This year we're not leaving home until after peak hour traffic settles down. Last year's trip was a huge learning curve. Peak hour = 2X normal drive time. Then add another 2 hours round trip when you realise that you've left your handbag with the keys to the unit and your wallet and phone back in Brisbane. This year I'd rather leave my running shoes at home and run in my boots than have to repeat that debacle.

I've had my usual internal battle about tomorrow's race. What seemed a great idea seems to pall as it gets closer. Doesn't help that the bout of flu put me right back with my training. In fact, this week the only running I've done was Tuesday's speed session. I piked on Wednesday's run but rationalized it because my knee was a little niggly after Tuesday's run and I've had a slightly elevated heart rate every since being sick. I'm great at rationalizing!

Will I PR tomorrow? There's no way on earth that I'll ever hit the 46s again but I'm starting to think in terms of post-OTS PRs. I ran Gold Coast in 52 mins last year so I'm aiming to go under that. The closer to 50 I get the happier I'll be and if I get under I'll be astounded and thrilled. You never know what might happen on the day.