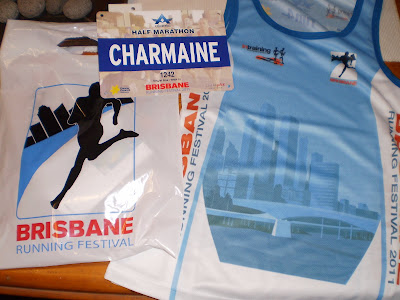 This is what I did this weekend. It was the Brisbane Running Festival and I decided to do my long run with a few thousand like-minded people. My aim was to enjoy the run and stick to around 5:30 pace.

It was a new course and I don't think they'd thought out the beginning very well. We started in a wide area only to be funneled into a narrow path. So it was jog, walk, jog, walk and a very slow first k. The path was covered in uneven pavers (tree roots had pushed them up) so with the congestion, the pre-dawn start and the unevenness it made for a treacherous run. And we had to do the initial loop twice so the front-runners overlapped the rear-enders making it even worse.

By the third k things had sorted themselves out and we were finally able to run at our own pace. I was running comfortably with the k's ticking over at 5:10- 5:15 pace. It was a little faster than I'd intended but I was feeling good so just went with it. The morning was warmer than expected but not too unpleasant and the course was fairly shady.

The first turn-around was at about 10k and we were turned back along the river towards Southbank. It was so pleasant running along the river enjoying the scenery. We ran back through Southbank then past the bridge we'd run across at the start and headed out past the Kangaroo Point cliffs - a well known spot in Brisbane for rock climbers. And it's here that my run fell apart. I started getting stomach cramps and when this happens I know I have to find a toilet fast! There was a nearby loo and no queues so I made a detour which proved not to be too quick. The cramps made it hard to know when I'd actually finished. I timed my rest stop at 2 mins and even though I didn't know if I was done I set out again, reassured that there were more toilets ahead.

The next turn around was up at around 17k and quite a few GaleForce friends were marshalling around here. It was so nice to see so many friendly smiles when I was feeling so miserable. And then, 1k after turning around, I had to stop again. This time it was the other end. Not so fun having retching at the side of the course and my apologies to all the runners that passed at that moment - especially the sympathetic vomiters!

At least there was only a few k to go. I sucked it up and headed back out into the throng. There was no way that I was not going to finish. I headed back over the bridge and into the gardens, rounded the bend and the finish was there. I crossed the line in 1:56:33

So not the best run for me but not too bad. I have to sort out my stomach issues. I'm suspecting that the new gel I've been using for the last few weeks just doesn't suit my stomach. I've had to make pit stops on my last few long runs and it's always about 4 k after I've taken the gel which is long enough for it to be absorbed and have an effect. Stomach issues are something I'm just not prepared to run through - I know my body and when I get the warning signs I just need a loo or a bush or even a large rock to squat behind.

As far as the event was concerned - the beginning needs a huge re-think. It was way too dangerous. But on the plus side - the toilet situation was good, I had no trouble finding a park, most of the course was scenic and flat (except for the industrial area we had to run through), the officials knew what they were doing, the water stations were manned by such friendly, enthusiastic kids, our bibs had our names on them so we got personalised support all the way around AND the finish area was great. Oh and I love the singlet that I got (which is the real reason I entered).

I've pulled up pretty well. My hamstrings are a little tight so I'll take it easy at speed tomorrow but I'm pretty happy with how I spent my Sunday. 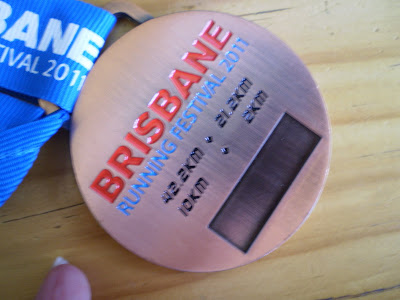 Check out the distance for the half marathon. They must have been psychic! With all my detours, that's exactly how far I ran.
Posted by Char at 5:47 PM