A Pain In My Own Butt 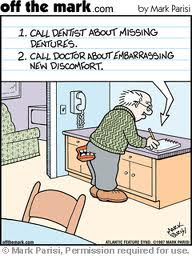 But now I've become a pain in my own butt.

Okay I've got to admit that it was only my hamstring to start off with. Something happened when I ran the Brisbane half. I didn't hurt it during the event but later that afternoon I noticed it was tight. I've been stretching and taking it a bit easy on my speed runs. But then we had the hill session from hell last Wednesday and I could hardly walk because of tight calves for a few days. And then on Sunday I decided in all my wisdom, that I needed to get my long run done. Not just a shorter version because my calf was still tight - the full 20k plus 1 for good measure. And the tightness in my hamstring has now migrated north to my butt.

And still this week I've tried to stick my head in the sand and pretend that it wasn't so bad. I did speed on Tuesday but kept to an easier pace and I did hills yesterday but didn't actually run the steepest hill in Brisbane I just did laps of a flat side street. And I iced and had anti inflammatories after but there's no denying that something is wrong because when I try to bend over to stick my head in the sand I get a bite of pain.

So it's off to the physio this afternoon. I'm hoping she just lays her hands on me and I'll be cured. (Yes I do believe in Santa, the Easter Bunny and the Tooth Fairy) But if she can't do that I'll be happy with a bit of massage, ultrasound and a shorter long run in the morning. And if that's too much to ask for I'll even forgo the Saturday run as long as I can run next week. But if that fails I will grudgingly take a whole week off as long as I can get to the start line of the Melbourne Half in October.

Fingers crossed that I haven't damaged myself too badly.
Posted by Char at 6:10 PM