An Open Letter to Coach Chris 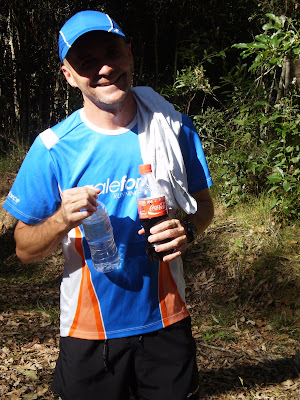 I can't believe what you did to us yesterday. The pain you put us through and the lingering effects today. I've been walking around today looking like I'm auditioning for Monty Python's Ministry of Silly Walks.

Have you put some sort of mood-changing drug in our Powerade which give you control over our ability to think for ourselves? That's the only reason I can come up with because I'm sure that eleven perfectly sane people would not voluntarily put themselves through what you put us through yesterday - AND pay you for the privilege of becoming disabled for the next few days. 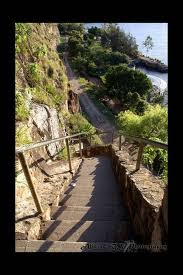 Those last twenty or so burned the quads unbelievably each of the five times we ran up. And going down was not much better. I was freaked out that I was going to fall. But I didn't and felt such a feeling of accomplishment when I finished until you made us run them one more time and said it didn't count as a sixth. But believe me right now - I COUNTED IT AS A SIXTH!!

If I wasn't under the influence of mind-control drugs I would probably have gotten into my car at this point. But like a lamb to the slaughter I followed on to those stairs at the Storey Bridge. How many flights WERE there? Eight? Ten? Twelve? I obviously didn't count - or maybe I just couldn't because of oxygen deprivation. But my legs were getting the hang of ascents and I didn't feel the burn till the top three steps. So I'm counting this as a small mercy. And again five reps! And of course THE SIXTH ONE COUNTED!

And then it was on to Medina Hill.

I have a special love/hate relationship with this hill. Compared to Gower St, it's not so bad but when you have to run it TEN times ... I think it was this part of the run that's made me walk like a duck today. I got up on my toes and drove through strongly with my thighs (well as strongly as my thighs will drive through) and today my calves scream at me if I flex my feet beyond 5 degrees and I've discovered an inner-thigh muscle that I never knew I had. And then we had to run it one more time to get back to the bridge. Why couldn't we have just stayed at the top on the tenth rep?

And then what did your sadistic little self make us do? Four more reps of Kangaroo Point stairs! Well I WALKED a lot of those reps. So stick that in your pipe and smoke it!!

This letter is in part a warning - now I'm more clear-headed, I'm plotting my revenge. You won't know when it's coming but believe me it's coming. I may make a 'special' batch of brownies (can you still buy chocolate flavoured laxatives?) I may accidentally sew together the legs of your jeans when you get me to take them up. Or I might just have to use one of those ropes that the climbers were using on the Kangaroo Point Cliffs and string you up while we all go off and have coffee.

So consider yourself on notice.

PS Have a great time in Canberra on the weekend and I'll see you at speed on Tuesday.
Posted by Char at 6:46 PM