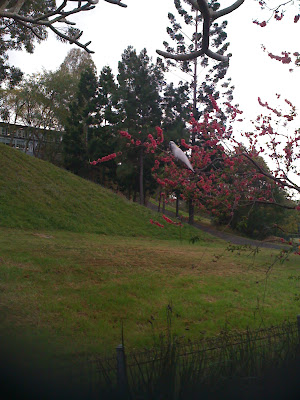 The photo's not great but I found this little fellow in our peach tree. We have cockatoos everywhere around here and I've decided that they're the disenfranchised youth of the bird world. They're loud and they travel in gangs.And they're vandals! My friend here was sitting in our beautiful tree just breaking off branches and dropping them onto the ground. I wouldn't have minded if he'd been eating them. And when I got closer to take the pic he said something really rude to me (Okay I can't actually speak fluent cockatoo but I could tell from his tone that it wasn't nice) then took off before I could call the cops.

And here's the kitchen - a year in the making but worth the result. I'm sorry I couldn't find any before shots. But picture pine laminate cabinetry with apple green bench tops (it WAS in in the 80s) and really scuffed and scratched cork tiles on the floor. Nice!

The end result is a lot more modern and a thousand times more functional. 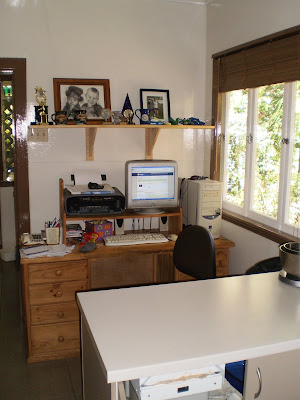 Note the homage to my running career on the shelf above the computer. I've managed to collect quite a few medals and trophies over the last decade. Not bad for a girl whose only trophy as a child was for memorizing scripture from Sunday school. 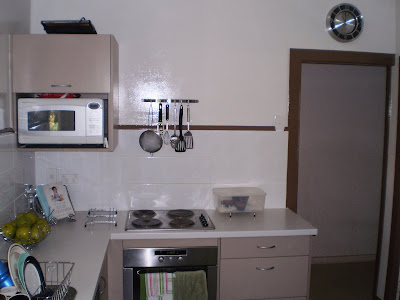 This picture has my 'big bargain of the week' in it. The clock over the doorway was marked at $29 and when we got to the registers it came up at $2.75. Woohoo!! And what would a kitchen be without a basket of fake fruit?! I thought the benches needed a splash of colour and plastic never rots. But these are such a good fake that one of Josh's little nurses brought him in a fake pear to eat. But I can't laugh. I remember taking a great bite into a fake wax apple when I was a kid - the flavour was disappointing to say the least.

I've had my first night alone. Sorry hon - not missing you yet. The bed was made with freshly washed sheets and smelt of sunshine and lemons and I was sure I was going to get the best sleep ever. And I did till 12:30 when I woke up convinced that something was looking at me. I almost wet my nice clean bed when I saw a ghostly apparition in a cape at the base of the bed.

At this point I have to explain that I'm VERY short-sighted so when I wake up in the night even a dressing gown hanging on the back of the door looks like a ghostly apparition. I sleep with ear plugs in so my nocturnal sons don't disturb my beauty sleep and I sleep with the door shut for the same reason.

The ghostly apparition made a weird whining noise so I knew it wasn't the dressing gown. It was Nelson! I mustn't have latched the door properly and he'd managed to push it open and he 'needed to go to the toilet thank you very much.' What his whine neglected to say was that he'd been REALLY busting and he'd accidentally done number 2 on the kitchen floor but he'd managed to hold onto number 1 and if we didn't get moving quickly all that bladder control would be for nought.

Anyway I got my own back at 4:50am. I'd cleaned up the solids but hadn't mopped (I know - I'm a bush pig but it was at an ungodly hour) so the first thing I did when I did get up was to give the floor a good clean. He went trotting through the wet, slippery patch and all four legs went in different directions. That'll teach him!
Posted by Char at 10:16 PM