It's been such a big week since I came back from Melbourne. I took the entire week off running - and it's just as well. I was so tired after our big weekend away. I even took a Nanna nap in my workroom on Tuesday. Thank goodness no one turned up because they would have found me snoring on my bed. And no, it's not strange to have a bed in your workroom.

I came home to a bit of a situation with my middle son. He'd taken himself off his anti-depressants about a month ago and had been doing really well initially but in the last week before I left he'd been going downhill emotionally - things at work and girl issues and still very poor self-confidence. But to cut a long short, he's back on his anti-depressants and I'm hoping that he picks up quickly. There's a lot more to it but it's all a bit raw for me to share at the moment.

So to change the mood to something a little lighter - I lost a very good friend yesterday. I know that doesn't sound much lighter but it was my electric mixer. I have only had it for two years and had previously just used a wooden spoon and a hand-held mixer so I loved this mixer. It changed my life and my baking. It has served me well week after week, through cookies and cakes. But yesterday I asked something of it that was just too hard. I was making soft caramel to put in my new cupcakes and the last thing I had to do was beat it up. So rather than using my pathetic, puny arms I chose to put the thick, sticky goo in the mixer. And I burnt out the motor. (Major sad face) When I came to mix up the icing nothing happened. Thank goodness I didn't through out the old hand mixer (25 years old and still going - they don't make things the way they used to.

I managed to finish the cupcakes 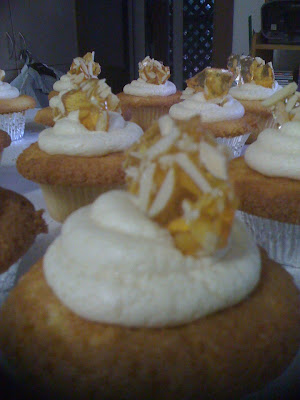 but I was left with a crisis. I've agreed to make cakes for a friend's 30th birthday and I can't imagine making them any other way now. So today I went out to look at what was available in terms of higher-powered mixers. I was only going to look and report back to Iven and somehow manage to convince him that we can't live without one. But when I walked into Harvey Norman and I was offered a $90 discount I just couldn't resist. Isn't she pretty? 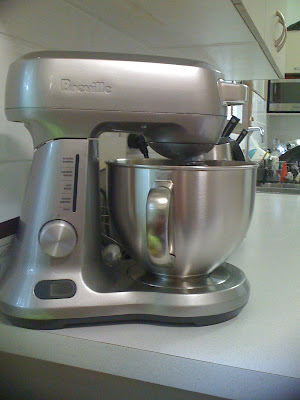 The cupcakes are as yet nameless. Too much happening in my brain to be creative. They're vanilla with a soft caramel filling and topped with caramel buttercream and almond praline. I'm open to suggestions.
Posted by Char at 6:44 PM