Training - Changing It Up

You might have noticed that I haven't mentioned running much lately. It's not because I'm not running. It's just because I've had to cut back a little. It's the end of the racing calendar (or at least my racing calendar) for the year. And I can't say I'm sorry.

It's been a tough running year for me. I've had too many health issues for my liking - two bouts of the flu/cold and sinusitis that lasted for 8 weeks and then there's the on-going hip injury. But I still managed 3 half marathons, a 10k and two 5k races plus, on average 50k training per week. I've missed more hill sessions than I've been to but sometimes that's the way things go.

I've spent a lot of time thinking about my running. I was so keen to build up again this year and try to re-claim some speed but I only seem to be getting slower so I've had to re-adjust my thinking. So after having a long chat with my EP son and Coach Chris, I have a new plan for this next year.

Firstly I'm putting some strength training into my exercise program. Sam's given me a program that I'm doing twice a week which will continue to strengthen my dodgy hip but will build up my leg strength. I'm doing more squats, squat jumps, hopping up stairs and core work. The session takes about an hour and he's aiming to build up to more plyometric work.

I'm not fooling myself that I'll get faster from this but I'm hoping I'll build up a little more muscle because that's what we tend to lose as we age. I've done a food audit - not like the one the dietitian did at the beginning of the year where she didn't ask about quantities. I've actually looked at the amounts I eat and found that I was averaging between 20-30g of protein per day. I was having enough calories but they were mostly in the form of carbs. Everything I've read (thank you Dr Google) has suggested that I need upwards of 50g a day and that's just for an average inactive person. So I've revamped my diet a little. I'm having protein powder with my cereal and a decent serve of protein at lunch then my usual dinner (which was where I got most of my protein from before). At least now I know that my muscles will have what they need to get stronger.

The reason I decided to change things up was because I was looking at some running photos. This one is from about 4 years ago. 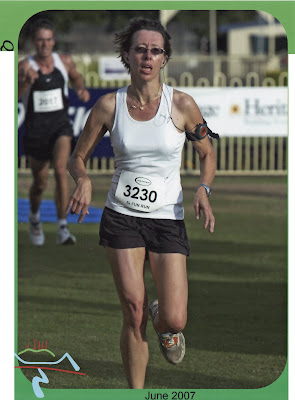 And the next was two years ago when I finally had to admit that all was not well. My sister remarked that I looked wasted and when I compared it to the first pic I kinda had to agree. I'd lost a lot of muscle mass especially in my legs. It may be a little late but I'm going to try to build it back up. 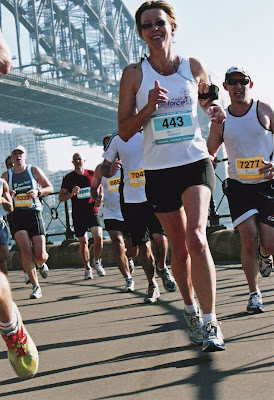 I'll just be running three days a week for the next month or so and then, hopefully it'll be back to four. I'm excited about my new regime. It's going to be an interesting year.
Posted by Char at 5:42 PM