I had another really AWFUL run today. Can I just admit that running wasn't all I did on the run - there was also walking and a little bit of socialising? It was just one of those runs where just being there was good enough and it doesn't matter about performance.

Blind Freddy could have seen that it was going to be bad even before I started. I'd had a disturbed night. Someone went to the loo (just next to our bedroom) in the wee small hours and the creaky door (I'm going to make sure that gets oiled) woke me up. I spent the next half hour debating with myself about my own need to follow suit. I should have just bitten the bullet and gone rather than pretend I could go back to sleep with a bladder the size of a basketball. I did go in the end but by that stage I was totally awake and couldn't get back to sleep for an hour or so.

When I woke up just after 5am I almost piked but decided that I'd beat myself up all day about it so I got ready. But just before I headed out the door I checked my phone and there was a missed call from Josh's girlfriend. Josh hadn't been really happy yesterday. I can pick up his moods the moment he walks into the house. He'd gone out to see his girlfriend and I was in bed before he'd gotten home. Seeing the missed call made me immediately think that something was wrong and I got this rush through my body - a flood of adrenalin. I told myself not to over-react but the damage was done. My heart rate was already up and my muscles felt a bit jelly-like (not to be confused with cellulity)

Let's just say my first kilometer was my best. There were a few little hills but nothing I couldn't normally manage. Today they felt like mountains. I made it just past the 5k mark and ran into one of my squad friends. Can't be rude, so I stopped and chatted a while. When I started back up I had lost any momentum that I'd had so I ended up run-walking the rest of the way home. My total run was 8.5k and I walked an extra 2k interspersed in those last 3k.

Normally this would make me feel a bit upset but today I'm just happy I got a bit of running done and I got out of the house and forgot to worry for a bit. When I made it home finally Josh was awake so I could talk to him about the missed call. He told me that he'd wanted to talk to me last night and had tried to ring but had ended up talking out his relationship worries with Catherine and was feeling a lot better about things. He also told me that he had a meeting at work today which he was worrying about. So I had my chance to tell him that knowing he's not feeling great and not knowing why is causing me a lot of angst so I need him to talk to me every day and let me know how he's going. It was so good to be able to talk openly and for both of us to share our concerns.

I've noticed that my running has a direct correlation to my worrying. If I'm worrying too much I run REALLY badly. If I'm in a good place - so is my running. But if I don't run at all I worry way too much so for the moment my running has to be relaxed and no-pressure.

The other place I get to vent a lot of stress, as you all know, is in my kitchen. And it's had a bit of a flogging in the last couple of days. I've created a cupcake that even I had to break my 'no cupcake' rule for. It's actually not really a RULE, it's because I'm not that interested in cupcakes. But yesterday's creation was just begging to be tasted.

First of all I made a batch of mini-cupcake brownies. Then I made toblerone cheesecake filling and refrigerated it till it could be swirled onto the cupcakes. 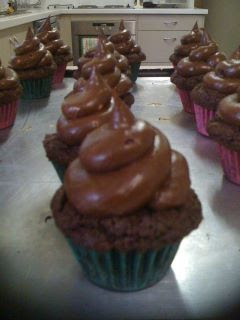 And then I dipped the top in melted chocolate. It. Was. DIVINE!! 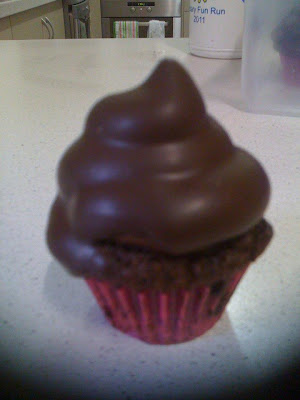