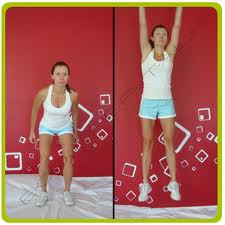 I love Wednesdays. It's one of the few days of the week where I can turn the alarm off and wake when I want to wake. I'm generally still in a good mood from my Tuesday speed session and I'm starting to plan where I'll go on my Thursday run.

But just because I'm not running doesn't mean that I'm lazy. Wednesday has become a strength work-out day and I'm really starting to love those sessions. Sam has changed my program up so today was the first time doing a lot of the exercises. Man, I can be a bit gumby until my muscles have learnt what they're supposed to do. My favourite today were dropping off the coffee table into a semi-squat and straight away into a long jump. I land like an elephant and I'm wondering how long our floor boards will cope.

It's gotten SO hot lately. I had been doing this workout in my pyjamas but until they bring out technical pyjamas I've had to change this habit. Because it's so hot, the more skin exposed to the air the better so today's ensemble was a fetching pair of shorty shorts (okay they were my pyjama bottoms but they were due for a wash) and a crop top. Unfortunately I didn't put the crop top on till I'd remembered that I'd be sweating up a storm and the getting on of the top was a workout in itself. I managed to get it bunched up around my sweaty shoulders and had to do this contortionist act to roll it down. And in the rolling-down process I managed to tangle up a sensitive part of my anatomy in the elastic. I didn't realise that I'd hurt it though until I hit the shower. It reminded me of the times when I was breastfeeding my teething babies. Ouch!

Having a shower this morning was not the normal uncomplicated event it normally is wherein you turn on the taps, adjust the temperature and hop in. I turned on the cold tap and nothing happened. But being a modern, capable woman I did not ring my husband in a flood of tears and insist that he come home and fix it. I decided to investigate myself. Still in my workout/sleeping clothes I took my sweaty self down the front stairs in search of a burst pipe. There was no puddles/pools/lakes of water to be seen which was a good sign so my next step was to check the water mains. Before I got close I could see what the problem was. My neighbour had plumbers in and they'd turned off our water instead of his. They quickly turned mine back on and I even got a hug out of them - pity it was from the old one who was missing half his front teeth. Why couldn't he have a young, muscle-bound side-kick who has to do all the dirty, sweaty work?
Posted by Char at 4:35 PM