Conversation with my #3 son ( Background behind this conversation - he had bought himself some shorts which fitted great but, once he was back at uni, he found that he couldn't spend all day sitting down in them without the, ahem, 'boys' being squished. I went past the same shop that he'd bought them in the other day and found they were on sale so I bought him two pairs in the next size up.)

You all have conversations with your kids like that, right? We're not weird or abnormal?

I want you to prepare yourself to be amazed and astounded by the rest of this post. Last week I did a whole 30 kilometres!! Yes, I know! That's totally mind-blowing. But even more astounding - I RAN 17 of those kilometres. Bit by bit. Inch by inch I'm clawing back my mileage. It's almost unbearably slow but my aim is to keep my heart rate low so it will be slow until my body says I can go a bit faster. I strung together over a kilometre in one hit on Saturday. Just a few weeks ago I remember thinking that a whole kilometre seemed like such a long way and now I can do it (as long as I walk for a while after).

But it won't go to my head like that little sip of apple cider did. I will be keeping my self restrained, constrained and disciplined until ... until it all feels normal again. 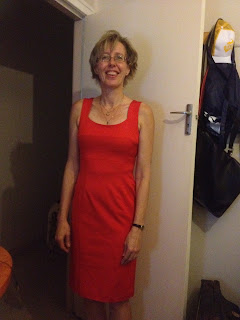 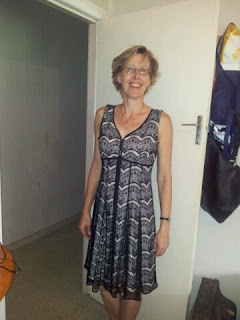 Excuse the dreadful photographs - this is what happens when you interrupt your child from playing an on-line game at just the moment when he is being set upon by gorgons and dragons and other nasties. He gets photographic revenge.

How I came to have two dresses is a tale of bravery and tenacity and self-belief that rivals my marathon story. Friday I decided that I COULD do what every other woman in the world seems to enjoy - I could walk into a dress shop and try on something. And even braver - I could walk into a posh dress shop in my old denim skirt and tee shirt and flip flops (I would have said thongs but some of you foreigners have a different idea of what a thong is - I'm talking footwear not underwear.)

The first shop I went into was empty apart from me and the 20something year old assistant. She was sweet and asked what I was looking for. She did NOT give me the what-the-hell-are-you-doing-in-our-shop-cause-you-don't-fit-our-usual-clientèle-look. She accurately guessed my size, sent me to the dressing room and proceeded to bring in every dress in my size that they had in the shop. I could not do up the zip in any of them. I have a freakishly large rib cage and these dressed were not made to accommodate it. But she even went so far as to recommend other shops and then she wished me luck and I moved on.

The next dress shop had another lovely assistant. I gave her my spiel about needing a dress for a wedding, not being a dress-wearer and being a shopping-hater. And she did the same. I was whisked off to the dressing room and she flooded me with appropriate dresses. I could do up the zips on these ones. And I even had to go down a size. The red one fitted like it had been made for me and although it wasn't what I had in mind, I had a rush of blood to the head and bought it anyway.

Saturday arrived and flushed with my courage and success I decided to hit up a couple of other shops that I'd been recommended. Iven volunteered to be my shopping companion (give the man a medal). We went to  Paddington and started to wander. There are lots of dress shops up and down the street and we went into most of them but I didn't try on anything until I saw THE lace dress. I'd seen it on line the day before and fell in love with it. It looked just as pretty in real life. And then I tried it on - it was a little big and they didn't have another size. But I can sew so that's only a minor hiccup. So I bought it.

And now I have another problem. I like them both. So which do I choose - the red or the black?

And hold your breath for the next thrilling chapter - Shoe and Accessory Shopping : Where The Fun Never Ends!
Posted by Char at 3:49 PM