It's been over 24 hours since I last had a fever, threw up or had to take paracetamol so I think I'm getting better. Little cheer - yay!

I am a terrible patient because I have no patience being sick. Someone commented to me that they'd love to have the chance to just lie around and watch DVDs all day. Unfortunately having the flu means that you can't even be bothered getting out of bed to move to a room with a TV in it. Let alone go out and hire DVDs. Yes, I know I went out and did the grocery shopping - but that was different. And you can't expect me to be logical about why when I've been sick.

And as for all the junk food that I bought in my fever-fuelled shopping binge, it's still waiting to hijack me in a weak moment in my pantry. All except for that packet of jellybeans that I tried valiantly to enjoy and on both attempts failed miserably, wishing them a bon voyage down the toilet. I won't be looking covetously at jellybeans for quite some time.

Today was supposed to be the first day back on a program for my running. I had to text Coach Chris on Saturday to say not to bother. I feel like I'm going to have to start all over with my running - building up again. I'm pretty sure that it won't take too long this time but it's disappointing non-the-less after spending the last six months working up to where I was. Last week my plans were to run the speed session on Tuesday, a flat 14k into the city on Thursday, the group 12k on Saturday and another 10+ on Sunday. My week ended up with a speed session on Tuesday and a slow 200m walk around the shopping centre on Friday. But that's been my whole year - I make plans and can't follow through on them. And it's not even bothering me any more. I just go with the flow.

But it's not all been bad - being sick. I've had lots of TLC from Toby. He's snuggled next to me to share his body heat. 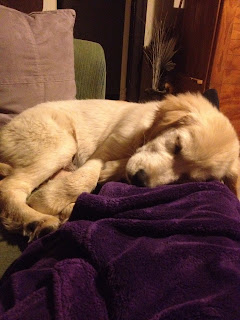 He's kept my spot warm for me when ever I had to get up to go to the loo. 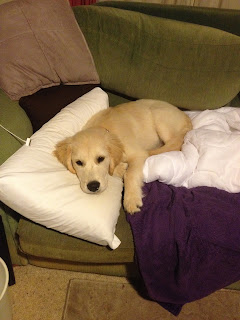 He helped keep Bubbles under control. 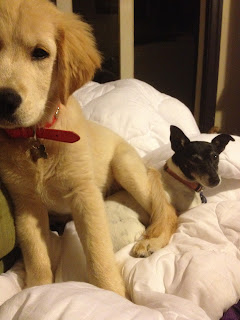 Going to extremes when she was feeling particularly disruptive. 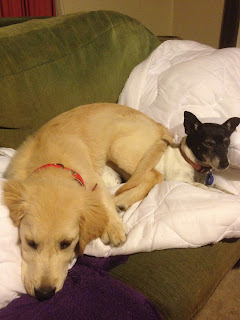 And he's gone to get the newspaper for me every day so I didn't have to miss out on any news.

Am I a besotted puppy-owner?