Right from when I was a little child, I was timid. I was shy and afraid of the world. Not confident of my own abilities. All through school I battled with fear and nerves. I would spend mornings before school with a stomach ache and sometimes, if I was especially anxious, I would throw up (didn't help that we were forced to drink milk that had been sitting in the hot sun for hours) and then the school would call Mum and I'd get to spend the day at home - safe from the scary world.

This fear of life has kept me on the straight and narrow. I have never smoked because I knew if I took even one puff I'd be the one to get lung cancer. I didn't drink because I was scared of what would happen if I got drunk AND I really didn't like the taste. I've only ever slept with one man because I knew I would get pregnant and get a sexually transmitted disease (probably AIDS) if I even thought about being promiscuous and even if I used contraceptives.

I've been scared of flying - just ask my sisters who got upgraded to business class because I had spent all morning throwing up at the airport and had to be wheeled around the terminal in a wheelchair. The nurse on duty was convinced that I'd celebrated too hard the night before. OBVIOUSLY she didn't know me.

I used to be scared that something would happen to my husband. And I would sit on my patio every day with my baby son in my arms and wait anxiously for him to get home. Now it doesn't worry me so much so I worry that I don't love him as much any more or (if he's left a tissue in his pants and thrown them in the wash) I worry that something won't happen to him.

I've often banged on about how great running is for you. How it gives you energy. How it keeps your heart and your body and your mind strong. How it keeps you young. How it relieves stress. For me, though, it's given me one bonus advantage - it's made me fearless!

Can I run a three day relay in 35C heat? Sure I can. Can I run for two hours in an overnight relay from 2 am to 4 am. Yeah - no sweat. Can I run a marathon? Well if all my running squad can do it then I probably can too. And I did!!!

So getting sick AGAIN at the beginning of the year was particularly shattering. It knocked my confidence in my abilities, in my body and it made me a little fearful again. And I don't like it. I don't like having to say no, I can't do something because I just don't know how I'll be. I don't like worrying that my body will give out on me again. And I really don't like that nervous feeling that I get in the pit of my stomach when I have to put myself out of my comfort zone.

But last week's race went a long way to building up my courage again. I won't say I'm invincible. I've proven over and over that I'm not that. But it showed me that I have tenacity and some good old-fashioned pig-headed stubbornness. It emphasized just how much support that I get from my running squad and proved once again that they will be there in the tough times and the good.

AND it gave me the desire to sign up for another race. The Melbourne half is looking good. Especially if I get to run it with these happy people. 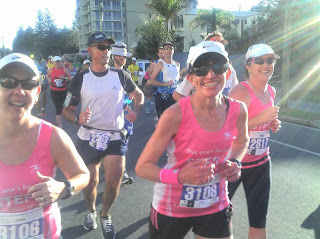