Before I get inundated with get-well gifts and cards for him (but if you feel compelled to send gifts, he's quite fond of almond M&Ms and always shares some with me ... or is it the other way around?), I'd like to say that it's totally self-inflicted. His greed has given him a little bout of mild gastritis. And by greed, I mean him eating anything and everything. Dog food, human food, compost, chicken food, sticks, chicken poo and possum poo. This is not a dog that you want licking your face.

He puked his dinner up last night. And this morning I had to clean up four more piles of slightly digested solids of unknown aetiology. I managed to rush him outside before he produced a fifth so I'm counting that as a win. Apart from the vomiting there's really no other symptoms. He's alert, happy, hungry and energetic so I'm not worrying. A day off food will hopefully have him better again.

I think, though that the gastritis is a bit my fault. I let my son dress him as a superhero for fun. 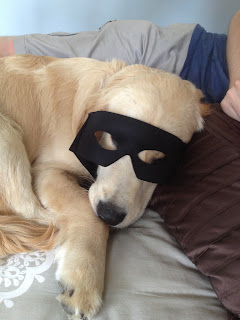 Toby liked his new status and started to believe that the mask gave him super powers. He believed he could fly. Which is the only explanation I could come up with when I found him in the chicken run eating all kinds of unmentionable things. When I told him off I saw that the three foot high fence was no longer a barrier between him and what he really wanted. He didn't even need a run up to bound over it.

As I sit typing this I'm having to pause to yell at him out the window. He's lying down next to this morning's big success (the one that didn't soil my carpet) having a second go. Ughh! Hopefully, being already partially digested, this time it will stay down.

I got some new nozzles last week. For piping! It nearly killed me to have to wait till the weekend to use them. But the wait was worth it. I got a medium petal nozzle and a medium leaf one. The first is a daisy-type flower. 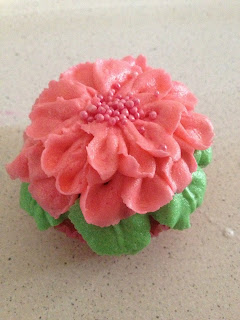 This next one is supposed to be a rose but I think horticulturists would argue with me on that so I've decided to call it a camellia. 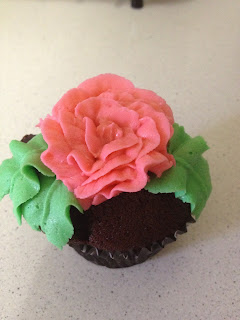 And we can't forget that Christmas is just around the corner. 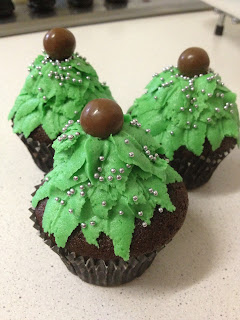 Yep, I got hours of fun out of those two nozzles.

And last, but not least I had a pretty great weekend of running. Saturday was hot and humid and Coach Chris decided to add another H word to make my trifecta of dread. Hills! We went out along Hillside Terrace. Next time I might need a sea-sickness tablet before I go. Up and down, up and down. But I made it - 16k. Apart from the hills, and the heat, and the humidity I quite enjoyed it. Especially the finishing part. I had some great company and she didn't even complain when I walked the last little bit of the last hill.

And then Sunday I went out on another run to wrap up my fourth for the week. I was a little worried that the previous day's effort might have left me drained but not so - 11k @ 5:45 pace. That made a 53k week all up. That's two weeks where I've run over 50k so I'm a happy little runner.
Posted by Char at 7:42 PM