Snoring and a Toby Update.

A few dozen years ago I made a promise before my family, friends and God. It went something along the lines of loving, honouring and obeying (I feel like I was conning no one when I said obey). There were also words mentioned about sickness, health, richer, poorer and death. But not once was any contingency given about snoring.

Iven is a snorer.

Because we did not do the whole 'try before you buy' thing before we got married, the snoring was a bit of a surprise that I wished one of his college room-mates had let me in on. Thanks guys!!

I'm a light sleeper. And the whole light-sleeper/snorer combo is not working for me especially now that I'm contemplating another marathon. All that extra training means that I HAVE to get good quality sleep. I already sleep with ear plugs but for the past few nights even they've not been enough.

He only snores when he's on his back so my tried and true method of stopping the snoring has been to poke him and tell him to roll over. He hasn't always taken this well. And sometimes has told me that he wasn't snoring because he was awake. Obviously! I go out of my way to screw with his head at 2am just for the fun of it. But because he doesn't always react well to being poked (I'm assuming he's in the middle of some amazing dream) I've been less inclined to tell him it's time to roll. And I lie there festering in resentment that I'm awake for no good reason, dreaming up ways of stopping the noise. At 2am the best solution that consistently comes to mind involves some form of bloodshed and a prison term - unless torture by sleep deprivation is considered justifiable homicide.

My favourite daytime solution involves one of my sons leaving home, sound-proofing and blackout curtains. But until then I'm going to have to pluck up my nerve and just poke away. Unless anyone has any other bright ideas?? 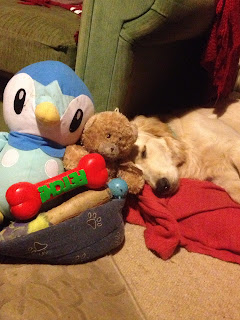 Toby is much better - thank you all for your concern. The vomiting was only a 24hr thing and seemed to stop once the higher fence had been put around the chicken run. He had lots of company and pats while he was under the weather and I'm sure that helped lift his spirits.

It's so nice not to have to deprive him of food any more. Those sad brown eyes looking at you when you eat are tough to resist. And having him out of action as the pre-wash rinse cycle for our dishwasher has meant that our plates aren't getting that nice sparkle that they usually have.

And for all of you who asked about cupcake decorating tips. My best one is You Tube. I haven't done any classes. I've just looked up stuff that I wanted to try and almost invariably it's there. Don't you just love technology?!!