I swear those super-sleuths on TV have nothing on a runner who believes she ran better than the results on the internet suggest.

The provisional results for Sunday's race were on line by Sunday night and I'd been curious all day about the lady in pink that I'd passed in the home stretch. I'd thought that she might be in my age group  but I'm a terrible judge of age and the lady who'd collected the third place medal wasn't her so it was up to the results to satisfy my curiosity.

So I was surprised when I saw this - I'm seventh name down and the two people following close behind are definitely male. Plus the time I'd gotten on my watch was 5 seconds out. Sure I might not have pressed start the moment that they'd said go (it was a really low-key event - no starting pistol or hooter) but I certainly don't have a tortoise-like reaction. I'm more ninja-on-red-bull especially when I'm trying to drag off a P-plater apprentice tradie in a ute at a set of red lights. 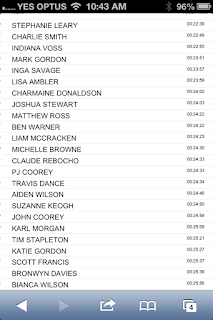 So who was the lady in pink that I'd passed? Was she just a figment of my oxygen-deprived brain that I'd conjured up to keep me pushing the pace right to the end?

I knew I was going to have to wait till the photos came through to see if I was just making up porkies, if I was hallucinating and maybe needed (more) medicating and a white jacket OR if something had gone amiss with the timing and the results.

Photos came through yesterday evening and I'm relieved to know that I'm not seeing little pink people. Somehow the results got a little stuffed up - not sure how when it's all done with the magic of chips and computers.

It took quite a bit of searching to find the incriminating photos. The photographer had done a really good job of getting shots which hadn't been photo-bombed by hoards of gurning runners. (Gurning is a quaint English tradition where you win by being voted the most grotesque-looking. It's like a reverse beauty pageant.) 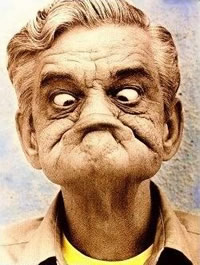 But persistence is my middle name. Or it might be OCD. Or she-who-must-be-right. I eventually found what I was looking for.

Here's me finishing in front of the lady in white from the half marathon and if you look closely you can see a little sliver of pink just poking out from the side of the finish arch. 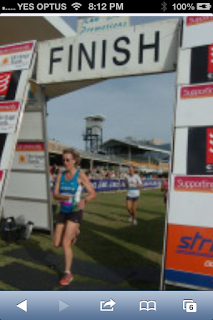 And here's the same white lady being followed through the finish line by my pink hallucination-who-was-actually-real. I checked her number against the results and 'apparently' she finished 5 seconds ahead of me and won the 50-59 age group. 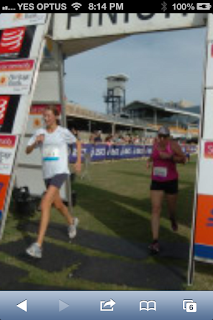 So I'm claiming my rightful victory here and now. I might not have the medal but in my head I'm standing on the top of the podium with the olive wreath around my head and the gold medal being placed around by neck by none other than Hugh Jackman (Yep, I enjoyed that congratulatory kiss, Hugh. Hope you did too.) while the stadium full of adoring fans erupts with cheers making it impossible to hear the Chariots of Fire theme being played over the loud-speakers.

Pity reality isn't as much fun as my imagination!