It's All Done With Smoke And Mirrors And Industrial-Strength Underwear

Could be that the new bra I bought this week has special anti-gravity properties. Man, I love physics - and I love how physics can be used to counteract its basic laws. A few bits of elastic, appropriately moulded foam, some pretty lace and lycra and some industrial-strength wire can wipe away the effects of three hungry babies and 50 years of gravity. 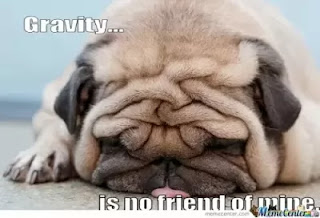 Actually I'm thinking that I should lengthen the bra straps just a little - my mammaries aren't used to the altitude and I don't want them suffering from lack of oxygen. So maybe I should acclimatise them by extending the straps way out then tightening them a little every couple of days. Doesn't altitude training result in the production of extra red blood cells to help minimise the effects of the lower oxygen concentration? So wearing a more uplifting bra should eventually result in me being a better endurance athlete. And a perkier one.

So you can probably guess from the new bra that I did finally manage to go underwear shopping this week. Sans sons. And a whole new world was opened up to me. Who knew that there was underwear that really negates the need to ever exercise again? That would probably be every woman in the developed world except me.

I thought that it was only by hard work and privation (or being one of the genetically blessed minority) that women were able to look good in clothes. Not so. Apparently you can manage to slim off kilos just by squeezing yourself into a modern-day corset. 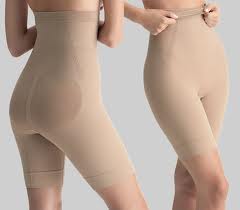 Spend a good twenty minutes wrestling this thing on and not only will months of substance abuse (my substance of choice is peanut m&ms) be forgiven but the glute-deficient amongst us can instantly blend into a crowd - no longer to be mocked by their more well-endowed sisters (who can probably twerk). If only they'd had these years ago when I spent most of my weekends sitting on concrete watching the boys play football. I would never have had to bemoan my lack of god-given padding or the fact that I'd forgotten to bring a cushion again.

See Coach Chris - there's really no reason to run hills. Apart from developing strength and stamina. Why go to all the trouble when you can give the illusion that you run hills and do squats in your spare time?!

I can't help but feel that it's all a bit of a con job. And that there must be some mightily disappointed men out there who go to 'unwrap their present' only to find that it's not what they were expecting.

But regardless of my moral misgivings I will be wearing said garment of medieval torture. The French said it best - 'Il faut souffrir pour etre belle.' One must suffer to be beautiful.