Big weekend! As in I-need-a-weekend-to-recover-from-my-weekend kind of big.

It started Friday night going wedding dress shopping with a running friend. Perfect dress found. And got to see the most amazing views of the Brisbane River at night from the tenth floor.

Saturday started bright and early as it always does with the long run. I had nothing on my program (because of Sunday's race) but had been given permission to run, as long as I was feeling okay and kept the pace comfortable. I felt great and managed a very social 16k followed by a coffee and more socialising. Have I ever mentioned that I love my running group??

Saturday day was filled with the stuff that most Saturdays are filled with - catch up on all the jobs that get left during the week. Plus a little (unsuccessful) shopping for the upcoming nuptials. And by late Saturday afternoon our house had become the launch pad for my son's university ball. Luke and Becky scrub up pretty well. 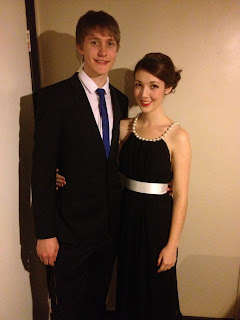 Iven had no sooner left to drop them at the ball and it was time to go watch Sam's soccer match. I'm usually pretty good about actually watching the match when I go but Saturday I was distracted by social media (my bad). I'd posted pics of Luke and Becky and was reading the comments when there was a cheer from the UQ team's supporters. We'd scored. And it turned out that, worse than missing a goal, I'd missed seeing Sam score. I am a bad mother! Luckily the guy sitting in front of me had seen it and coached me in what to say when I congratulated Sam - that he met the ball well and left the keeper stranded. Yeah, Sam didn't believe that I'd say intelligent soccery stuff like that. Should have just said "great goal" and left it in the believable realm.

Sunday morning dawned with only a few jitters. Seems that having a few events close together like this has worked wonders in getting my nerves into a manageable place. There were enough nerves to make sure that I wouldn't have to find a bush in the middle of the course but not so many that I wanted to spew on the starting line. I'd got the balance just about perfect.

My race didn't start until 8:30am but we arrived at Doomben Race Course at 7:30 to pick up my race number and have enough time to warm up and use the loos. For the first time ever in my personal history of racing I didn't have to queue at the toilet. Plenty of stalls - no waiting. It's every runner's dream come true.

After a quick pre-race photo with the coach ... 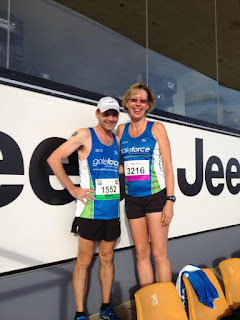 ... I headed out to do a quick warm up and watch the previous runners come in to the finish. Warm up completed five minutes before the start and I still got a place close to the front of the pack. I love smaller races!

The race started on time and we were off up the road. It was a small enough field so that all the dodging and weaving was done in the first couple of hundred metres and then it was clear sailing on open waters. I could see a lady in pink about 70 metres in front of me who looked like she was in my age group so I made it my task to try to close the gap on her. The first k clicked over in 4:35 and I was breathing pretty heavily so I eased up a little in the second, 4:47. That still felt a bit hard so I decided that it was just going to have to hurt - after all, if you're not hurting in a 5k race you're not doing it right.

The third k beeped at 4:43 and I was happy with that. Even happier when I realised that the gap with the pink lady had closed a bit. By the end of the fourth k it was down to only about 20m and I had the first scent of victory in my grasp. Yeah, I know there were more people in the race than just her but she was the one who had my target on her back.

The last k seemed really long but with the entry to the race course in sight, I made my move and passed the pinky. It was risky because there was still a couple of hundred metres to go and if she had more in the tank than me and a bigger desire to win she'd fight back. And she did. She passed me just before we turned the corner onto the home stretch. But I had the ace up my sleeve. Those speed sessions where Coach Chris made us lift our pace in the last 50m. I put on the turbo-boosters and passed her just before we hit the line.

And then I had to keep walking to make sure I didn't throw up. Yes, victory can be sweet but public displays of your half-digested pre-race banana are a little embarrassing. 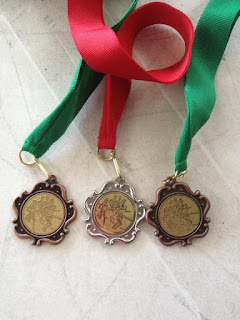 But the best moment on the day came during the medal presentation. Most of the squad had gone and I'd told Coach Chris that I'd collect any won by the squad. One of our girls had taken out third in the 10 000m in the 30-34 age group. As I went to collect it there was applause and no shocked gasps of disbelief that I could possibly be that young. And the announcer didn't even suggest that I was Lucy's Mum coming to collect on her behalf. Winning!

So my three races in four weeks are now done. Time to knuckle down and get some solid training done before my next in five weeks.