I got a reminder that although I've made leaps and strides in my recovery, I aint there yet.

It happens every four to six weeks. I get some of the symptoms that plagued me last year - the fatigue, insomnia, nausea and tingling in some of my muscles -
and I just have to back off. Ride out the storm.

It freaked me out the first time it happened. I'd had a couple of weeks where I was just starting to feel good. All my symptoms had disappeared. Then, overnight, they were back. And they stayed for about ten days.

The next time that it happened I was still a bit freaked but less so than the first time. This time I just know that if I bide my time I'll be feeling normal before long. And I've noticed that these symptomatic periods are getting shorter and shorter.

It makes me angry that a drug that was deemed to be safe by so many official organisations has had such a lasting impact on my life - two years of feeling unwell, of thinking I was a hypochondriac, of accepting my life would probably be limited by fatigue and I wouldn't be able to do the things that I really wanted.

It makes me angry that I spent so much money on doctors and specialists and complementary medicine and supplements for a condition that was caused by a drug that I was prescribed. That all the doctors knew I was taking and not one of them considered could be the cause for all my issues.

It makes me incredibly angry that this drug is still on the market despite so many people having adverse reactions to it - strokes, DVT, gall bladder removal to say nothing of the minor ones that I had which didn't seem minor at the time.

Yaz and all the other oral contraceptives containing drospirenone should have been taken off the chemist shelves years ago. The corporate conscience of Bayer should have made them voluntarily recall their product. But apparently money will trump conscience every time and they're happy to reap it in even if they do have to pay out some of those profits on law suits.

Silly me, I thought that they were making drugs that would improve our lives. You'd think that meant they cared about people.

So this week will be my easy week. And I'm fine with that. I'm also incredibly grateful that I chose the 5k option for the race this weekend. Even with some minor symptoms I can tough out 5k - might have been a little more challenging if I'd chosen the half marathon.

And next week I'll pick myself up by the bootstraps again and dive back in to my marathon program. 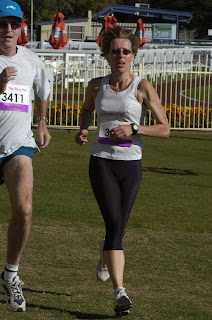