Believe It Or Not.

A few weeks ago I was sitting in a hospital emergency ward with Iven and a boy (young man, really) was put into the bed next to us. He'd been getting stuff out of his garage for a garage sale and had stood on some glass. Ouch! We heard the doctor tell him how he would be treated but all he cared about was that he'd be able to run the half marathon that he'd entered five weeks away.

When the doctor left I popped my head around the corner, blatantly told him that I'd been eavesdropping and asked if it was the Sydney Morning Herald half marathon. Yes, he was doing his first one down in Sydney with his Mum and had run 15k just that morning in preparation.

The doctors stitched him up and sent him on his way with a promise that he would be fine by race day.

Last Sunday morning while we were walking to the race start we got stopped at a set of lights with some other runners. Sam commented that it looked like a mum with her two sons. That reminded me about my hospital buddy and when I looked over one of the boys seemed a little familiar. He looked at me too but I didn't see any recognition in his eyes and I really wasn't too sure.

I made my way to the never-ending portaloo queues and who happens to stand beside me in the next queue but the same boy. Of course I couldn't help but satisfy my curiosity. (There's nothing weird about talking to strange young men in toilet queues). And of course, in the tens of thousands of people there that morning I happened to find the boy from the hospital.

A few of you who have commented have expressed a desire to one day visit Sydney. I can heartily recommend it but I would like to add a proviso that will make your trip more pleasant.

Make sure you be wary of beggars and thieves.

This little fellow looked like he was from a nice home but he obviously didn't get fed enough. Those sad brown eyes watched every mouthful of my post-run breakfast enter my mouth and he even had the gall to tap me on the leg when my plate was getting close to empty. 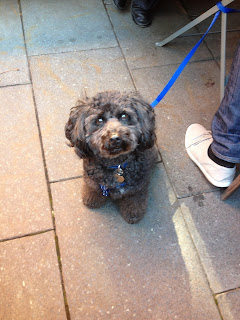 No, I didn't share. I am a heartless human being. 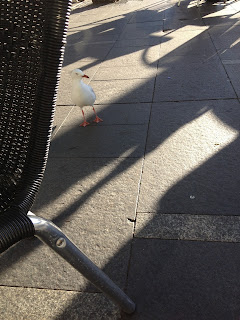 And this sneaky individual is one of a team of thieves that operate around Circular Quay and other touristy locations in the harbour city. He skulked around our table while we ate lunch, waiting for his moment to swoop in and seize whatever he could make off with.

Earlier that day we'd seen the gang in operation down at Darling Harbour and they scored big-time! An untouched rasher of bacon. Dividing up the spoils was an ugly affair and I'm pretty sure that the ring-leader diddled his gang out of their share. 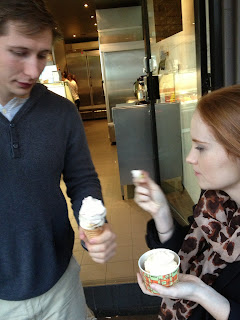 And then there's the red-crested spoon bill, who's adapted to her preferred diet and habitat by always having a tasting spoon on hand. She swoops in on the unwary ice cream eater and before you know it, a spoonful of that delicious creamy treat has disappeared. This bird is not at all aggressive though and can be tamed to make a lovely pet. (Love you Hannah!)

Avoid any of these and you'll have a great trip ... unless you find a red back spider on your toilet seat.