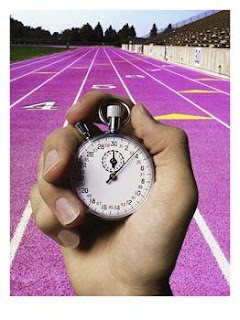 For years now Tuesday mornings have been speed session morning. Rain, hail or shine you'll find a group of runners at the base of the Green Bridge at the University of Queensland at 5:30 am ready to whip themselves into a running frenzy. To run till it hurts. Till we're gasping for breath. Till we can't respond to Coach Chris in anything other than monosyllables. And sometimes only with a thumbs up (because to respond in the negative would show weakness and we're anything but weak).

It's one of my favourite sessions of the week. We get to stay together as a group - which doesn't always happen on long runs because of the wide diversity of running abilities and goals - so there's the chance of catching up with more people (but only on the recovery sections). Doesn't matter if you get lapped, which I do frequently, because whether fast or slow we all respect that everyone's putting in and everyone's hurting.

We get to run faster. And there's something exhilarating about running faster. It brings out the inner child who just liked to run fast because it felt good. Sure I'm not as light on my feet and not as fast as I once was but I can still imagine that I am. And I'm pretty sure you get a bigger dose of endorphins when you really push yourself to the max.

We get to run to a goal. The goal is to run as even a pace through the session as possible. For me this can be tricky. When you start the session if you run to a certain point of exertion it will be a lot faster than after running 40 mins at that level of perceived exertion. The trick is to start off a little easier because it's bound to feel a lot harder at that pace by the end. The sessions that I've run the most even splits are the ones that I've felt most satisfied after.

But now that we're heading towards winter I've been finding that pacing a lot harder to achieve. I'm pretty much having to run without the aid of my Garmin because it's just too dark to see the splits until at least halfway through the session so I'm on a bit of a learning curve with pacing according to feel rather than electronics.

I know I've been doing this for a lot of years now but for the past couple of years my speed sessions have been limped home with my only aim being to actually survive till the end. I've gotten to a point in my recovery now that I can actually plan on pushing myself for the entire session.

Yesterday's session was the first that I'd really noticed how dark it was where we run. And it seemed to stay dark for a long time. The program was surprise intervals of either 200, 400, 600, 800 or 1000m and we were to be told just before we started the next interval.

It started off easily with a couple of 400s then a 200 but then Coach Chris threw me to the wolves with 2 X 1000m in a row. And it was starting to hurt. I don't mind hurting when I can see that I'm achieving some sort of speed but I hate when it feels hard and I'm just not going that fast. I couldn't see how I was going compared to the other runners because we were all on different intervals so I had to do a bit of stern talking to myself. There was a lot of 'you can do this - just three hundred more' and 'you're stronger than you think' and 'embrace the pain', 'suck it up princess', 'go hard or go home' ... Sometimes those voices in my head can be quite cliché.

It wasn't until the third 1000m that I finally got to see my split time. That one had been a real surprise because we'd all been running 200s for a few reps and I'd been caught in a tussle with another runner for each of those (and she'd pipped me at the post both times). My legs were tired. My lungs were burning and in my head I was convinced that I was heading out to do another 200m so hearing the 1000m call almost brought on a mutiny.

It felt slow. My legs just didn't want to cooperate but I willed them to follow the beat that had been playing in my head for the whole session. I was sure it was going to be close to 5 mins - but hopefully not over. Just for my pride's sake. I hit the button as I crossed the line - 4:39! Not too bad for the end of the session.

When I got home I looked back over the last few month's worth of speed sessions. (Yes, I am that numbers freak who likes to have data, analyse it and compare). It's so gratifying to look back to when I started treatment in December and see the marked improvement in just a few months. At the start of January I was running 400s around the 1:56 and yesterday they were all between 1:42 and 1:45. Definite progress.

So the point of this post? My recovery is coming along really well. And if you've never tried a speed session, you should give them a go. They're challenging. They'll take you to the point of wanting to quit. But you'll learn how to push past where you thought was your limit. And you'll get satisfying improvements in your running.