A week full of nerves and anxiety and self-doubt came to a head yesterday morning when I lined up with my big boy Sam in front of St Mary's Cathedral in Sydney. 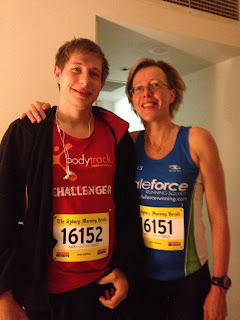 Actually I'll backtrack a little bit. Friday's flight went without a glitch. Smooth sailing right from the moment we left home till when we landed in Sydney. Sam's girlfriend, Hannah met us at the airport and seeing the two of them together was probably the highlight of the whole weekend. Their greeting was like one you see in a big Hollywood romance where the girl is swept into her soul-mate's arms and the violins swell. Made me feel all warm and fuzzy.

Hannah got us to the hotel safely and quickly and proceeded to be the best guide and Sherpa ever. 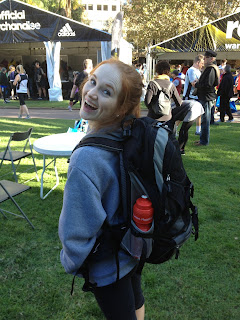 Saturday was filled with nothing special - eating breakfast at Darling Harbour, wandering around the city, buying undies that wouldn't ride up during the running (Sam didn't quite follow the rule of never wearing anything untested in a race but I'm pretty sure he came out unscathed). 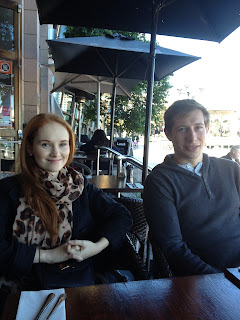 In the afternoon we checked out some of the race course to take some photos and see the start precinct. 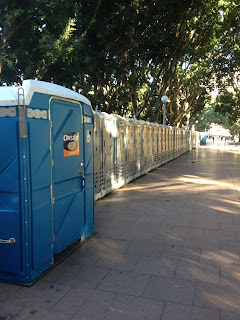 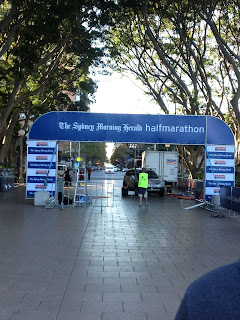 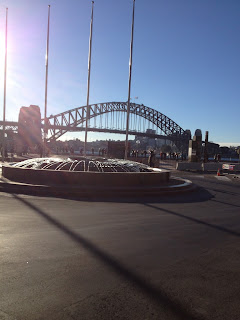 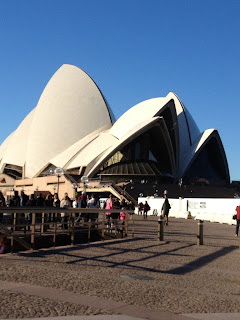 I'd had little nerve flutters all day but managed to keep them from getting out of control. Walking around definitely helped. Seeing the race precinct definitely didn't. Luckily I tripped up a set of stairs and almost fell and that kept them contained for a while. I DID manage to eat a bit. When I get really nervous I just can't eat and I'd not been eating particularly well all week because of it. It makes for very pathetic carb-loading. But I couldn't face going out for dinner so I stayed in the room and tried to eat what I could - a banana, a handful of nuts and a scone.

Sleep was erratic Saturday night but that's the norm before a race. We got up with the alarm at 5:30 and got ready. The nerves were still in check and I started to believe that I'd make it to the line unmedicated. We left the room around 6:00 for the short walk to Hyde Park.

It was teeming with people. There were over 10000 finishers so that gives you an idea of how long the toilet queues were. I'm pretty sure I was in line for at least fifteen minutes and I couldn't believe how long some people take. I thought pre-race jitters made everything happen quicker.

We got to the start line with only about ten minutes to spare but because we hadn't entered early enough, we were in the last starting group so were hundreds of metres away from where the gun went off. In fact, I didn't even hear the gun go off. I'd managed to find the only other GaleForce runner, Jan, that was in our starting group and we spent the time till we could start moving just chatting away. 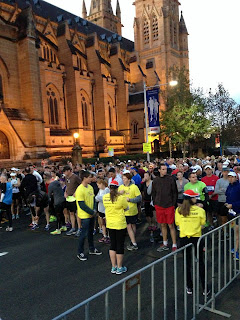 Eventually we were off - and by eventually I mean fifteen minutes after the start. There were hordes of people in front and to the side and behind so it was pretty hard to get into a rhythm. I lost Sam and Jan after about a kilometre but that was an inevitability and I hadn't wanted to run anyone's race but my own.

My plan had been to take it out slow and warm into it. I'd been thinking high 5's for the first few k's but my legs had other ideas -5:17, 4:59, 5:02 for the first three k. It was about then that I decided to just go with it and hope that it didn't come back to bite me later on. It was a bit hard, though, to let go of that little inkling of worry that I still couldn't trust my body but I think after being so unwell for so long that's only to be expected.

The route was pretty convoluted and undulating. I haven't really done any hill work but I found that I was passing lots of people up the hills then instead of just plodding down the other side, I used the down-hills to push along. I was actually enjoying the hills.

And while I was running I was distracting myself from those little niggly doubts with thoughts of the support that I've had from squad mates, friends, family and my lovely bloggy friends. It felt like everyone was there in spirit cheering me on.

Around the 15k mark I did tire a little. Some of it was knowing that there was still 1/3 of the race to go. Some of it was that the negative thoughts were getting a little more insistent. And some was the realisation that I hadn't needed to tighten my left shoe after all. My hips have been a little dodgy for a while because I'd lost so much muscle strength when I was testosterone-deficient and running a hilly course faster than I usually would was starting to take a toll. My left knee started to get a familiar grabbing twinge. My ITB was tightening up and that was making it hard to run the up-hills with any power. But luckily it didn't get to the really painful stage where it's hard to run so I tottered up the rest of the hills as best I could and prayed that there wouldn't be too many more.

By about 17k we were back near Hyde Park and could see the finish line and this gave me a real boost. I knew we were heading into the botanical gardens for a loop but it was really nearing the end. I've done that loop before as part of a different race and really enjoyed the scenery and it was no different yesterday. Yes, I was tired and my knee was niggly, but I was feeling really positive.

Out of the gardens there was only about a kilometre to run so I did my best to put on a little speed. But it was hopeless - the road was so congested with other runners it was hard to push through. No finishing sprint this time. The clock said 2:06 when I crossed the line but my watch said 1:51:39. My fastest time since 2010. 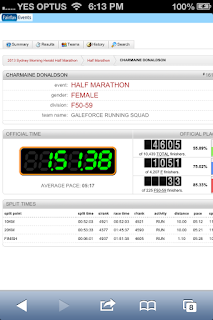 Sam was waiting for me as I got through the crowds. He had no idea what his finish time was but when we looked through the results later that night We saw that he was now the holder of the fastest half time in our family - 1:42:28. I'm so proud of him!

And me? I'm happy. I finished 33rd  out of 225 in my age group. And I know that there's more improvement to come if I can run without the congestion and continually having to slow till I can find a clear path. My confidence in my recovery has improved and I will have more faith in myself next time.

Yes, there's already a next time in my diary. I've entered the Jetty 2 Jetty half in July. Maybe sub-1:50?? 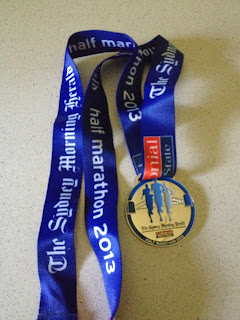